Truly Ergonomic Computer Keyboard Review: One Month with the TECK

For most people, when someone mentions ergonomics in regards to computers, they’ll think of a variety of things: what’s your desk like, what sort of chair do you use, and do you have one of those “funky” keyboards? The TECK obviously targets that last aspect, but in an entirely different fashion from what most are used to seeing. Let’s start with a quick rundown of the QWERTY keyboard design that has been with us for around 135 years. 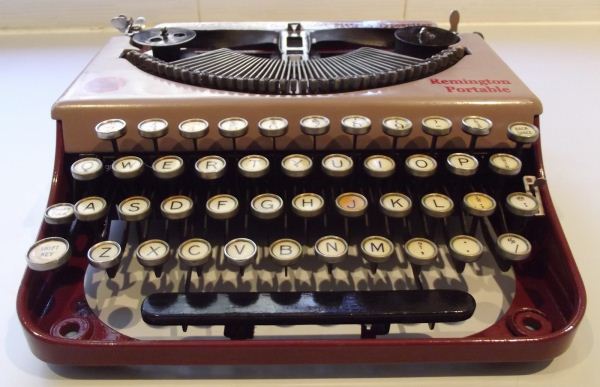 The first typewriters were mechanical devices with the characters placed at the end of metal arms that would be activated by pressing the corresponding key/button. The problem with the initial design is that pressing adjacent arms in rapid succession would frequently cause the two arms to stick together, creating a jam. The solution was a modified layout, the most popular eventually becoming what we know now as QWERTY, where commonly used letter pairings (e.g. TH and ST) are spaced out and all of the vowels are moved off home row with the exception of the letter A. [Amusing anecdote: I actually wrote some papers back in elementary school on an old mechanical typewriter. It was awesome watching the levers go up and smack the paper, but using whiteout to remove mistakes was a pain.]

With a modern keyboard, of course, jams are no longer a concern and so there have been various efforts to create a more optimal layout (e.g. Dvorak), but overcoming the momentum of QWERTY is a lot like overcoming the momentum of x86—so many people grow up learning the QWERTY layout that converting over to something else can be very challenging, especially when most other devices continue to use QWERTY. There's also the question of whether or not you can actually surpass QWERTY (thanks to the reader comment pointing out the "Dvorak Myth" article; I've edited this section slightly after reading about the Dvorak myth, though that doesn't actually debunk the question of ergonomics). Whatever the case, on a standard keyboard there's clear evidence that our fingers end up moving more than would otherwise be required when typing on a modified layout, and this is further exacerbated by the type of movement.

According to TECK, not only do we have a potentially less than optimal layout, but the staggered arrangement of the keys with certain fingers (particularly the index fingers and pinkies) being required to stretch in sometimes odd ways to reach various keys creates additional stress on your hands and fingers. As I mentioned earlier, I have CTS, which can be pretty much wholly attributed to my (excessive) typing on keyboards over the years—and before you think, “yeah, but that could never happen to me”, I thought the same thing back in my teens and twenties; it was only in my early thirties that it suddenly became an issue.

Getting back to the TECK, the designers have worked to improve ergonomics (i.e. reduce the stresses associated with typing) by altering the layout and arrangement of the keyboard. Some of what has been done has been available elsewhere—for example, the split key arrangement so that your wrists don’t have to bend outwards for normal placement is the primary element found in most “ergonomic” keyboards (like the MS Natural line). The result is that your hands are farther apart and placed more naturally—which you can see in the above image comparing the TECK with a Rosewill RK-9100. The split on the TECK does alter things slightly compared to other split keyboards, though; for example the “6” is on the right half of the split (for your right index finger) rather than on the left—and this is one of several changes that can cause some consternation when you first begin using the TECK. But the changes don’t end there. 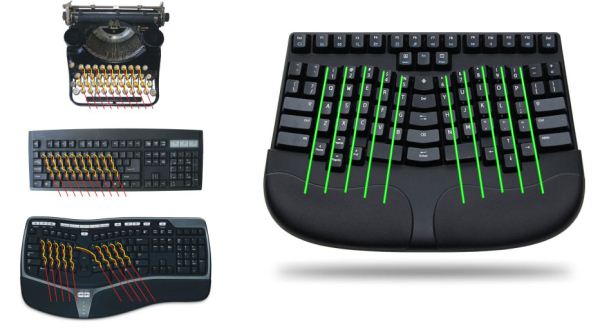 The second improvement is that the TECK no longer has a staggered arrangement of keys, at least vertically; all of the keys that most fingers are expected to reach are vertically aligned. Along with this, horizontally there’s a slight staggering (more of a curve, really) to accommodate the way our fingers naturally line up. Our middle and ring fingers are slightly higher than the pinky and index fingers, and the TECK is designed with this in mind. At least visually, when you place your fingers on home row with the TECK, the arrangement looks far more sensible than on a standard rectangular keyboard, or even an MS Natural or similar layout.

Another aspect of the TECK design to help improve ergonomics is that they removed the number keypad, reducing the width of the keyboard and thereby bringing the mouse quite a bit closer to where your hands are. This is probably the one “ergonomics” element that I didn’t find particularly useful, and while there is a Num Lock option (it uses the 789UIOJKLM keys in a pseudo-10-key arrangement), it’s far less than ideal for the entry of numbers in my experience. This is due to several factors, including the 0 being half-size and overlapping the Comma; the Plus, Minus, Multiply and Divide keys also being in the “wrong” locations; and there’s no Enter key on the right. If you regularly use a 10-key for numeric input, you’ll almost certainly want to get a separate 10-key for use with the TECK, though I do know some typists that can fly on numeric input even when using the regular number keys so YMMV. 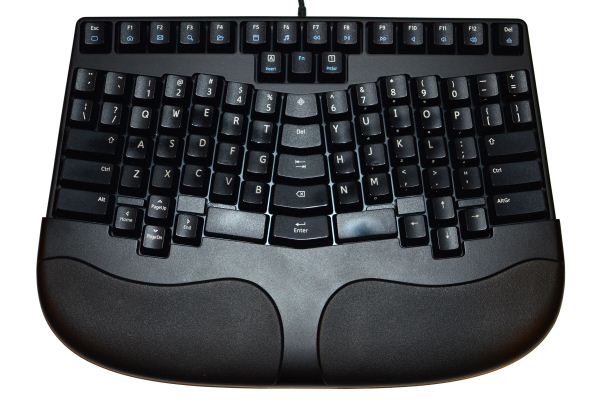 While the above are all somewhat noteworthy changes, by far the most radical difference with the TECK is when we get to some of the “extra” keys that you may not use quite as frequently when writing—Tab, Delete, Backspace, etc. Nearly all of these keys have been shifted around on the TECK, so for example the middle of the keyboard (from top to bottom) is home to the Windows Start key, one of the two Delete keys, Tab, Backspace, and Enter. On the left and right sides of the keyboard, the Shift keys are now on home row, Control is below those, and Alternate/AltGr comes on the bottom row. The cursor keys are moved under the right palm, in a diamond arrangement rather than an inverted T, and PgUp/PgDn/Home/End are similarly located under the left palm. Finally, the Slash (Question Mark) and Backslash (Vertical Bar) get shunted to the top-left section of the keyboard, just to the left of the Q and where you would normally find the Tab key.

All of the relocations are made in the name of ergonomics, reducing the amount of movement and stretching your fingers need to hit all the right keys. Besides the relocations, the TECK also comes with an Fn key (similar to most laptops) that provides alternate functions on the function key row, Caps Lock, and Num Lock keys. If you don’t like the specific layout that the TECK uses, it’s possible to remap most keys using a utility, but the Fn key can’t be remapped. Most of the key caps can also be moved to accommodate your layout, but many of the special function keys have specific shapes and sizes and can only fit properly in their intended locations. If you’re really adventurous, Truly Ergonomic sells a version with no labels that you could remap to your heart’s content, and I suspect it would keep everyone you know from trying to use your keyboard.

The TECK is available in an International version with two extra keys—the Alt/AltGr keys in the corners get split into two keys each. The bottom of the TECK is also home to a set of five DIP switches that can select between standard Windows and Mac functionality (e.g. Command instead of Control), plus there’s an “Alternate” mode on three other keys that could be useful if  you want to remap the left spacebar or center Delete key. I tested the US layout and left the default key mapping in place, as I figure that’s how most people will use the TECK. 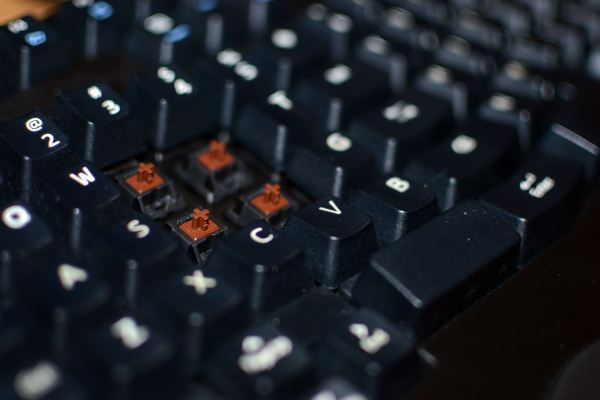 Rounding out the features is the one final element that makes the TECK potentially more ergonomic than most keyboards (and at least partly explains the rather high cost). Instead of an inexpensive membrane keyboard like what you’ll find on nearly every sub-$75 keyboard, the TECK uses Cherry MX switches, specifically the Brown switches. The reason for the use of MX Brown is that they have a slight “bump” when they’re depressed about half-way, and that’s when the key activates. That means you don’t have to type as hard and you don’t “bottom out” on every keystroke, again as a way to reduce the amount of stress on your fingers. While I would be interested in the ability to try out other Cherry MX switches, given the intended ergonomics of the TECK the use of MX Brown makes sense.

Outside of the features and layout, the overall build quality of the TECK feels solid. This is by no means a lightweight keyboard, which means you typically won’t accidentally slide it around on your desk while using it. It’s primarily constructed out of plastic, and the palm rest can be removed if you prefer, but I like the default setup with the palm rest installed. The travel and feel of the MX Brown keys is everything you would expect from Cherry MX switches, and while $250 is still a heavy price to pay for a keyboard, at least I don’t feel like the TECK might fail in the near future. Truly Ergonomic does offer a 1-year parts and labor warranty on the TECK as well, but hopefully that won’t be needed.

That covers my history as well as a brief overview of the TECK and its refined ergonomics, but how does it actually fare in practice? Admittedly, this is one of the most subjective reviews/articles I’ve ever written for AnandTECK…er…AnandTech, and personal preferences are going to play a huge role in what you like or dislike with a keyboard. I know some people that even dislike mechanical switches and prefer membrane keyboards, while most others feel the opposite. Keeping that in mind, then, let’s move on to the subjective evaluation of the TECK, with some amusing and perhaps painful anecdotes of my past month using it as my primary keyboard.

Introducing the TECK and My Background Subjective Evaluation: TECK It to the Limit (One More Time!)
Tweet
PRINT THIS ARTICLE
Comments Locked