When I got my hands on a Haswell based Ultrabook, Acer's recently announced S7, I was somewhat disappointed to learn that Acer had chosen to integrate Intel's HD 4400 (Haswell GT2) instead of the full blown HD 5000 (Haswell GT3) option. I published some performance data comparing HD 4400 to the previous generation HD 4000 (Ivy Bridge GT2) but added that at some point I'd like to take a look at HD 5000 to see how much more performance that gets you. It turns out that all of Apple's 2013 MacBook Air lineup features Haswell GT3 (via the standard Core i5-4250U or the optional Core i7-4650U). Earlier today I published our review of the 2013 MBA, but for those not interested in the MBA but curious about how Haswell GT3 stacks up in a very thermally limited configuration I thought I'd do a separate post breaking out the findings.

The top three configurations use a GPU with 40 EUs, while the HD 4400/4200 features half that. Intel will eventually introduce Haswell SKUs with vanilla Intel HD Graphics, which will only feature 10 EUs. We know how the Iris Pro 5200 performs, but that's with a bunch of eDRAM and a very high TDP. Iris 5100 is likely going to be used in Apple's 13-inch MacBook Pro with Retina Display as well as ASUS' Zenbook Infinity, neither of which are out yet. The third GT3 configuration operates under less than a third of the TDP of Iris Pro 5200. With such low thermal limits, just how fast can this GPU actually be?

First, let's look at what Intel told us earlier this year: 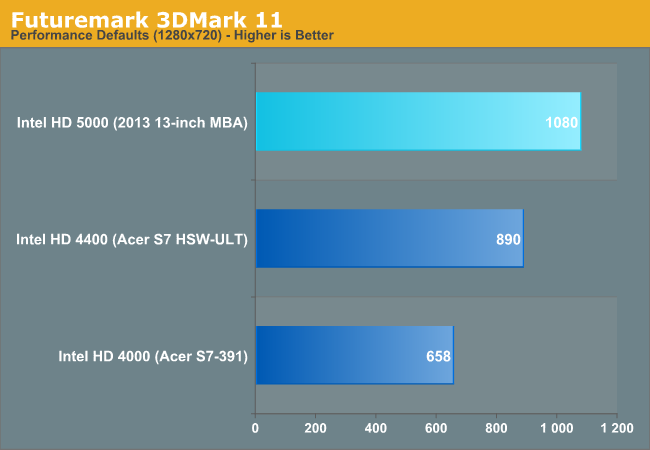 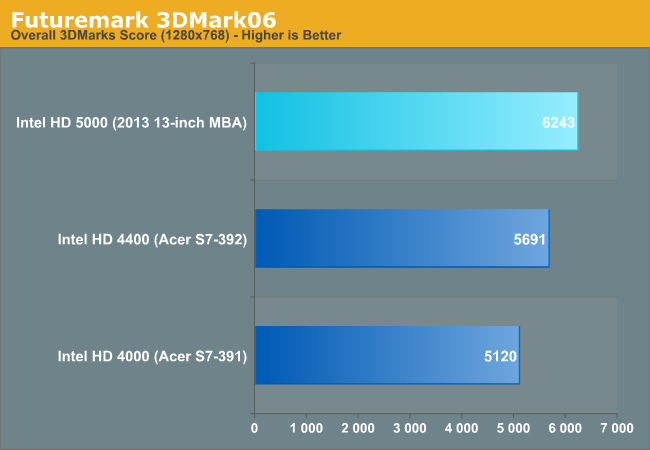 The data ranges from a meager 2.3% advantage over Ivy Bridge ULV to as much as 40.8%. On average, Intel's HD 5000 offered a 15.3% performance advantage over Intel's HD 4000 graphics. Whether or not that's impressive really depends on your perspective. Given the sheer increase in transistor count, a 15% gain on average seems a bit underwhelming. To understand why, you have to keep in mind that the performance gains come on the same 22nm node, with a lower overall TDP. Haswell ULT GT3 has to be faster, with less thermal headroom than Ivy Bridge ULV GT2.

The range of performance improvement really depends on turbo residency. With only a 15W TDP (inclusive of the CPU and PCH), games that have more CPU activity or the right combination of GPU activity will see lower GPU clocks. In Borderlands 2 for example, I confirmed that the GT3 GPU alone was using up all of the package TDP thus forcing lower clocks:

All of this just brings us to the conclusion that increasing processor graphics performance in thermally limited conditions is very tough, particularly without a process shrink. The fact that Intel even spent as many transistors as it did just to improve GPU performance tells us a lot about Intel's thinking these days. Given how thermally limited Haswell GT3 is at 15W, it seems like Broadwell can't come soon enough for another set of big gains in GPU performance.

I also put together a little graph showing the progression of low TDP Intel GPU performance since Sandy Bridge. I used GRID 2 as it seemed to scale the most reasonably across all GPUs: 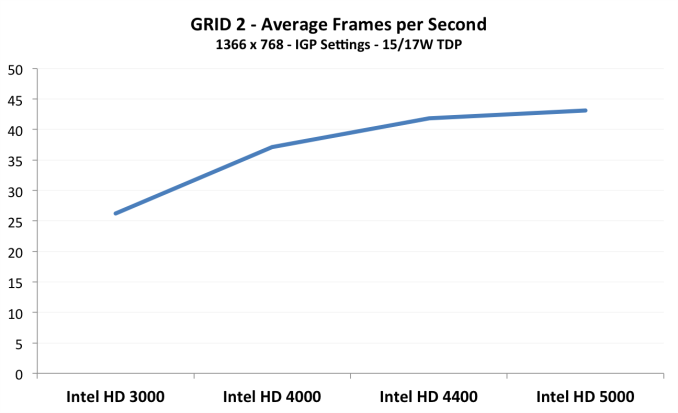 Note how the single largest gain happens with the move from 32nm to 22nm (there was also a big architectural improvement with HD 4000 so it's not all process). There's definite tapering that happens as the last three GPUs are on 22nm. The move to 14nm should help the performance curve keep its enthusiasm.

If you want more details and Intel HD 5000 numbers feel free to check out the GPU sections of our 2013 MacBook Air review.