First off, we have some video encoding benchmarks courtesy of x264 HD Benchmark v5.0. This is simply a test of CPU performance. As expected, the quad-core A6-1450 can give a good fight to the dual-core Bay Trail-based Celeron N2807 in the ECS LIVA. However, it is no match for the quad-core Celeron J1900 at much higher clocks (but, one which also has a much higher TDP and is actively cooled). 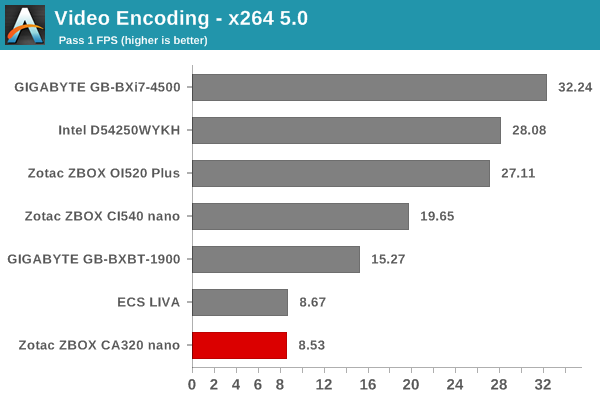 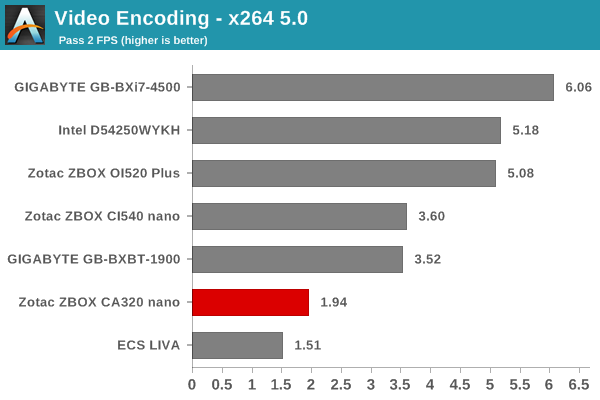 7-Zip is a very effective and efficient compression program, often beating out OpenCL accelerated commercial programs in benchmarks even while using just the CPU power. 7-Zip has a benchmarking program that provides tons of details regarding the underlying CPU's efficiency. In this subsection, we are interested in the compression and decompression MIPS ratings when utilizing all the available threads. 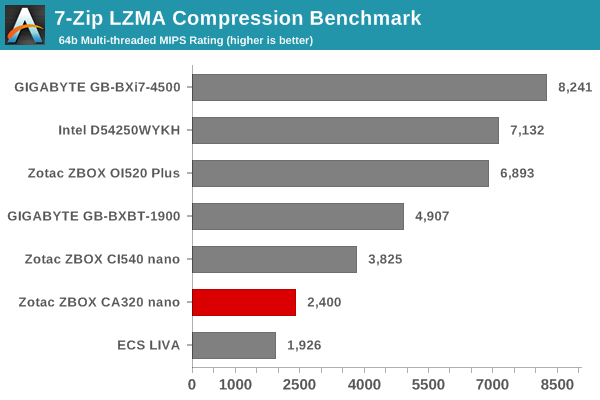 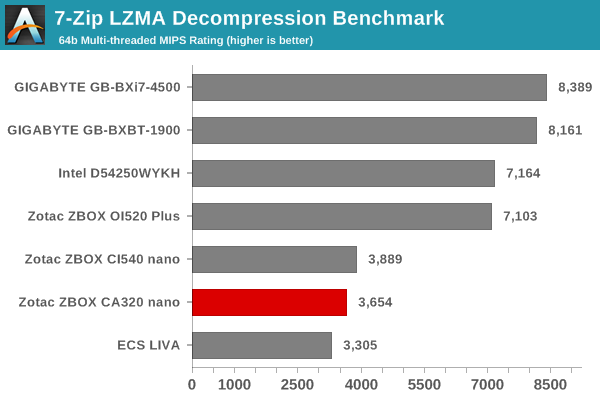 As businesses (and even home consumers) become more security conscious, the importance of encryption can't be overstated. The AMD A6-1450 APU does have accelerated AES capabilities, but the lower clock speeds tend to pull down the performance a bit. TrueCrypt, a popular open-source disk encryption program can take advantage of the AES capabilities. The TrueCrypt internal benchmark provides some interesting cryptography-related numbers to ponder. In the graph below, we can get an idea of how fast a TrueCrypt volume would behave in the Zotac ZBOX CA320 nano and how it would compare with other select PCs. This is a purely CPU feature / clock speed based test. 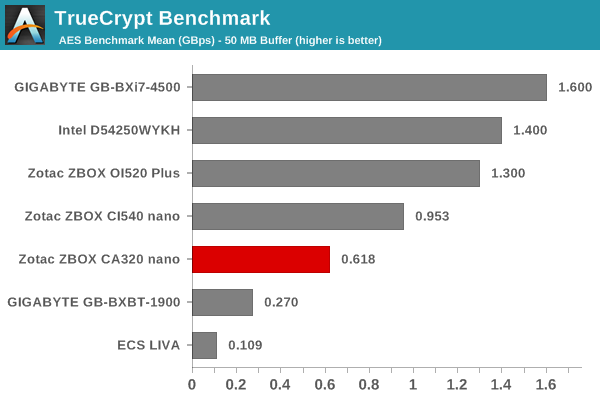 Agisoft PhotoScan is a commercial program that converts 2D images into 3D point maps, meshes and textures. The program designers sent us a command line version in order to evaluate the efficiency of various systems that go under our review scanner. The command line version has two benchmark modes, one using the CPU and the other using both the CPU and GPU (via OpenCL). The benchmark takes around 50 photographs and does four stages of computation: 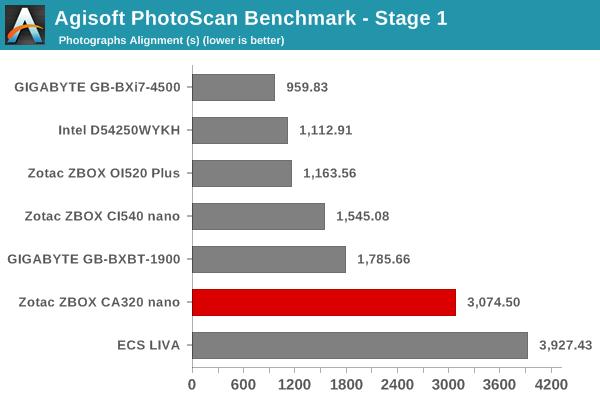 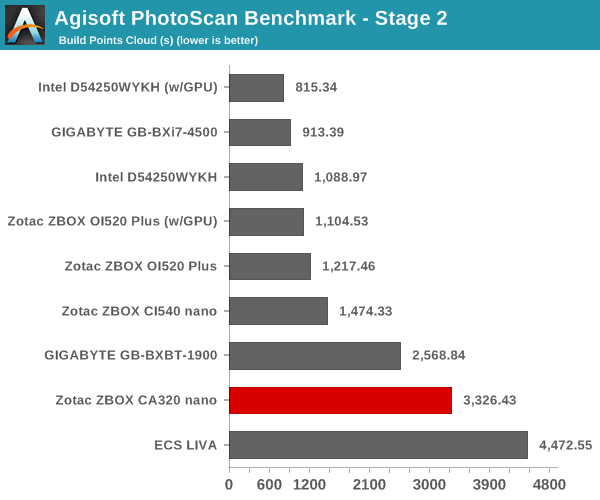 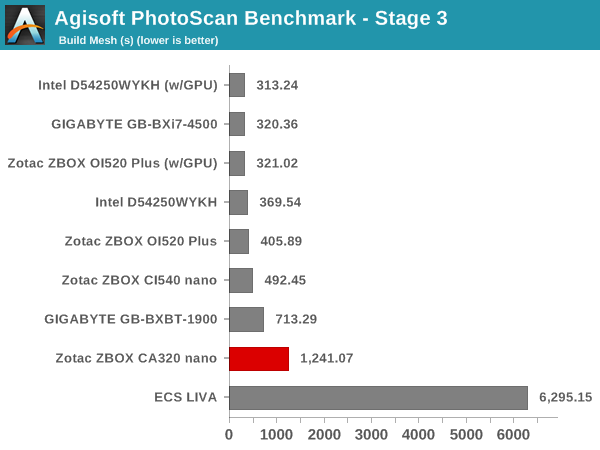 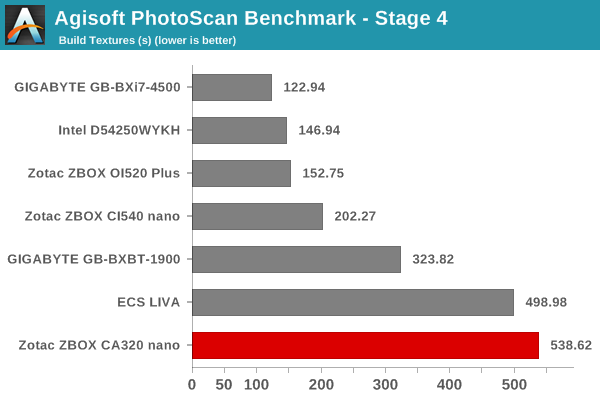 Wrapping up our application benchmark numbers is the Dolphin Emulator benchmark mode results. This is again a test of the CPU capabilities. This benchmark appears to be heavily influenced by the clock speeds - the performance difference between the Celeron N2807 in the ECS LIVA is more pronounced compared to the other benchmarks. 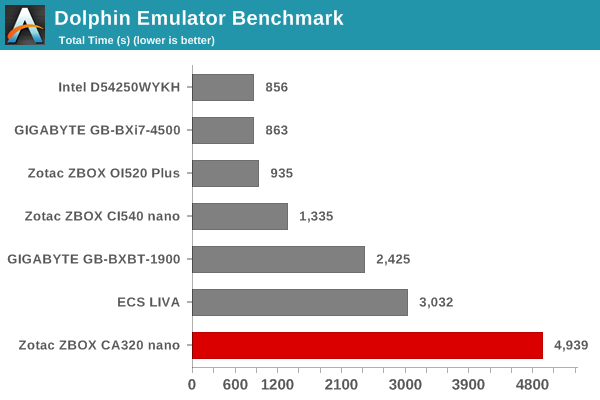