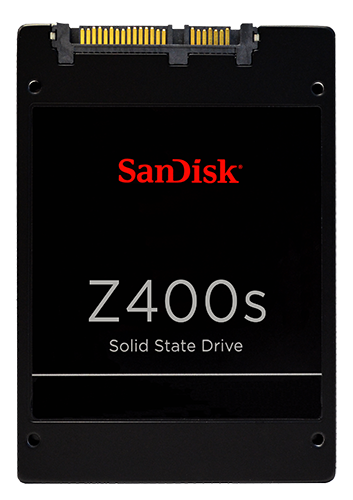 With Computex only a week away, SanDisk is taking a head start today with the release of Z400s SSD. SanDisk is aiming to cater two different markets with the X400s, the first one being the traditional mainstream PC space where SanDisk is looking to bring low-capacity drives at an affordable price, and the other one is the embedded market that includes applications such as digital signage, point of sale and surveillance.

Embedded devices still rely heavily on hard drives because the upgrade cycles tend to be long and the cost of SSDs hasn't been low enough to attract interest over hard drives. Most embedded devices often have only one key function, which is why the market hasn't seen SSDs as a viable solution until recently when low-capacity SSDs have become cost competitive with hard drives. Because the applications don't typically need more than a few dozen gigabytes, SanDisk is offering the Z400s in capacities from 32GB to 256GB in a variety of form factors including M.2 and mSATA. The reason why SanDisk isn't offering any higher capacity options is because the average client SSD capacity is still well below 256GB (~180GB according to SanDisk's own research), so since the Z400s is aimed for the hard drive replacement crowd the company wanted to keep the available options as low cost as possible. 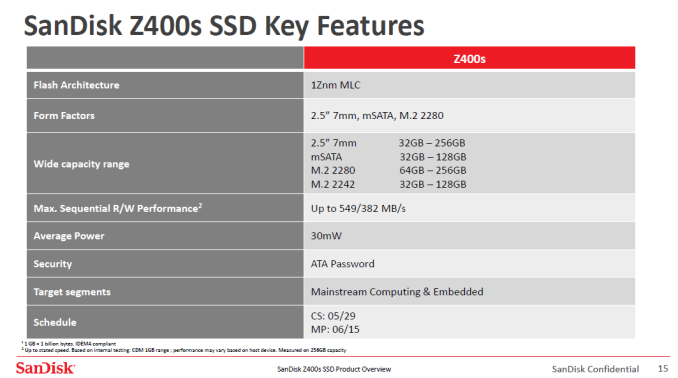 As usual, SanDisk isn't disclosing the controller inside the Z400s, but given SanDisk's history I would guess it's a 4-channel Marvell silicon, although I wouldn't be surprised to see a Silicon Motion or JMicron controller for further cost reductions (Marvell's controllers are relatively expensive compared to others). The Z400s turns out to be SanDisk's, and world's, first SSD to utilize 15nm NAND, which has certainly spent a long time in making. I posted a preliminary analysis on Toshiba-SanDisk's 15nm NAND in last August, but we'll know more once the drives ship and the die is put under a microscope. From what I have heard the supply of 15nm is still very limited, but we should see more products based on it in the coming months. 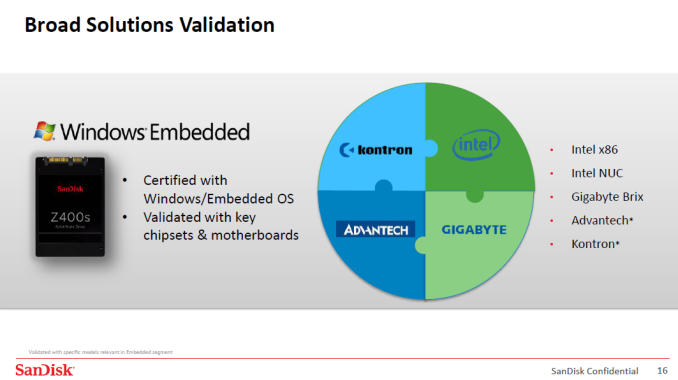 The Z400s has already been validated by a handful of key embedded PC manufacturers, including Intel's NUC and Gigabyte's Brix divisions that focus on small form factor PCs. That said, despite being focused on the embedded market the Z400s hasn't been validated for industrial use (large temperature scale, heavy vibration, humidity etc), so it's strictly for applications used in normal environments (e.g. a point of sale in a grocery store). While that somewhat limits the market, there are many applications that will certainly enjoy the benefits of higher reliability and performance that SSDs bring to the table. All in all, I don't really follow the embedded space enough to know how big the market is, but I do see it being a growing niche in the future. Given that SanDisk is an SSD-only company, it's logical for it to pursue smaller niches and markets that aren't overly populated yet because it can't rely on other operations for revenue growth (and due to SanDisk's recent stock performance, it's clear that the company needs to widen its revenue base).

The Z400s is entering mass production next month with availability being later in the summer. It will be available through the channel too, but since it's not exactly a retail product like the Ultra II SanDisk isn't publishing any pricing details at this point.