While the 600K keyboard is almost a mirror image of the 700K, the 600M gaming mouse is nothing alike the more advanced 700M. The 600M is physically entirely different from the 700K. However, it also has not been entirely stripped of every advanced feature as the 600K is, retaining many of the 700M's capabilities, just in a different form factor.

Cougar supplies the 600M in a well-designed cardboard box, clearly displaying the mouse itself and all of its important features and specifications. The top of the box can be opened to reveal the mouse itself, but sadly, the design of the packaging does not allow the potential buyer to test his/her grip. 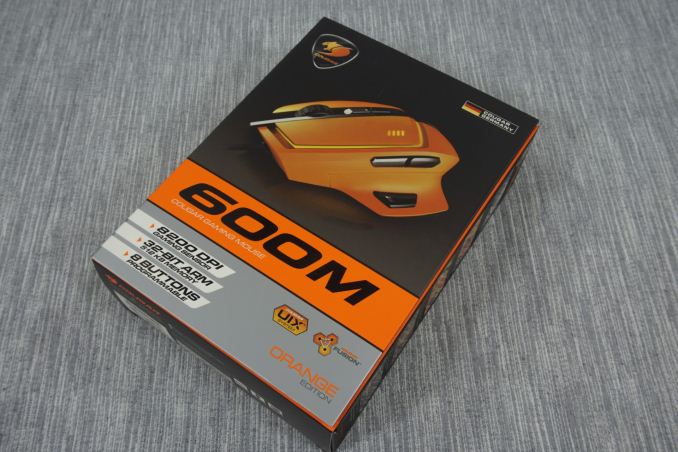 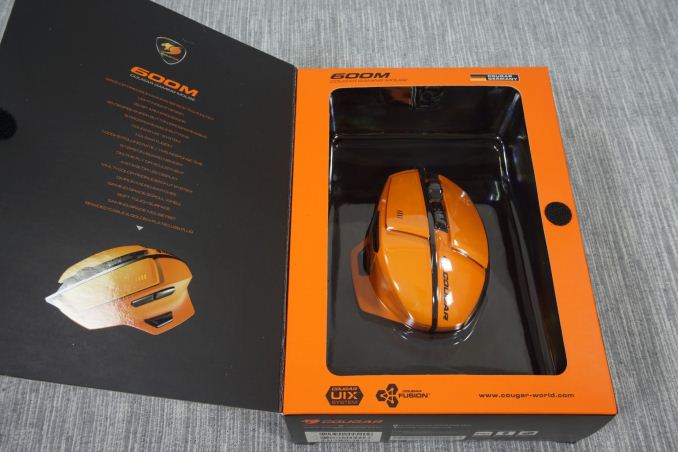 Yes, it is also available in black.

Cougar supplied us the orange edition of the 600M, which should be of interest to those that want something not so subtle on their desktop. The entire mouse is plastic and it has been treated with a matte paint that feels very soft and comfortable to the touch. The aluminum frame of the 700M is obviously gone but the 600M does not feel any bit less robust than its premium counterpart does. What would be a problem for some users is the lack of weight adjustment. Tipping the scales at just 90g, the 600M is a very lightweight mouse and upon first use might come as a shock to those used to working with heavy mice. 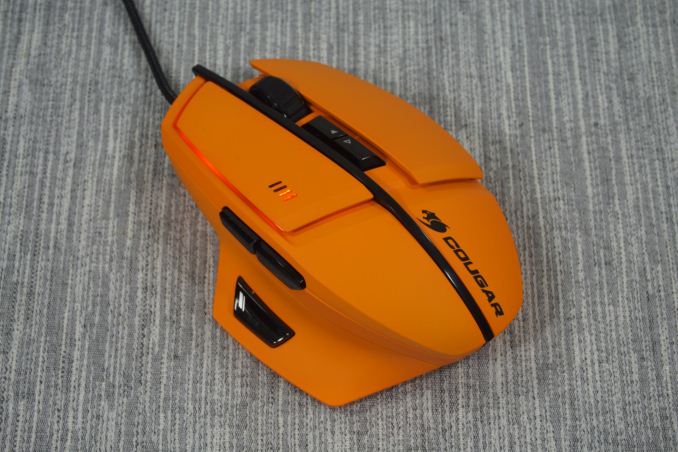 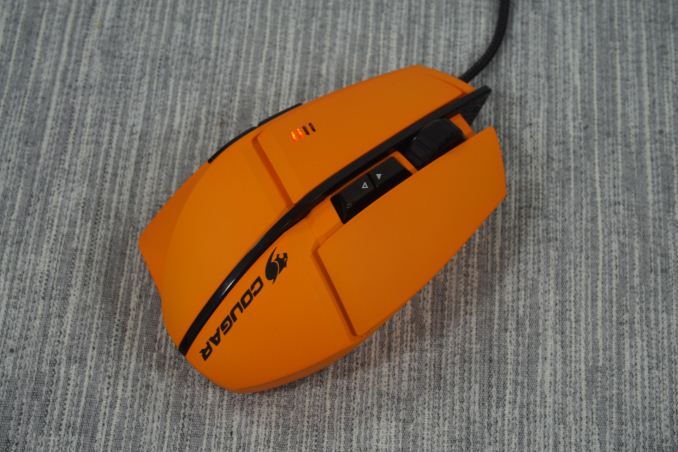 Including the basic left/right buttons and the wheel's middle button, there are eight buttons on the 600M, all of which are programmable. There are two "forward - backward" side buttons, two "DPI selection" buttons beneath the wheel and one "sniper" button on the left side grip. There is no "fire" button next to the main button as with the 700M, but the 700M also had one DPI selection button that was cycling between different modes instead. The Sniper button is placed on a 45° angle, with the company claiming that this improves the hand's stability while aiming. 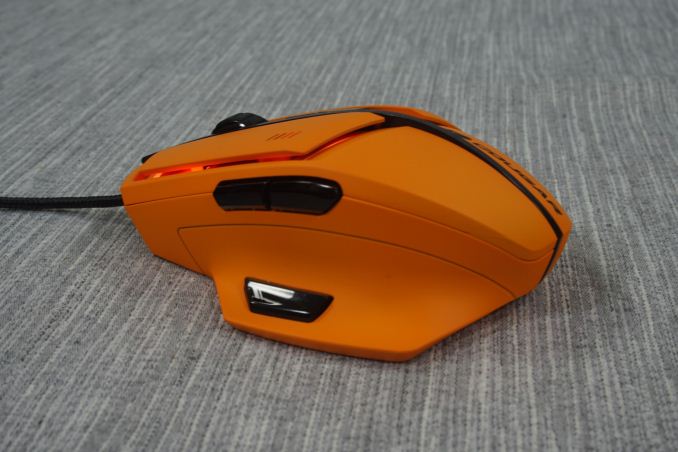 Aside from the Avago ADNS-9800 laser sensor, there is nothing else noteworthy of mention beneath the 600M mouse. Thin skid feet can be discerned surrounding the underside of the mouse. Although the skid feet appear very small, as this is a very lightweight mouse they should prove to be more than sufficient. 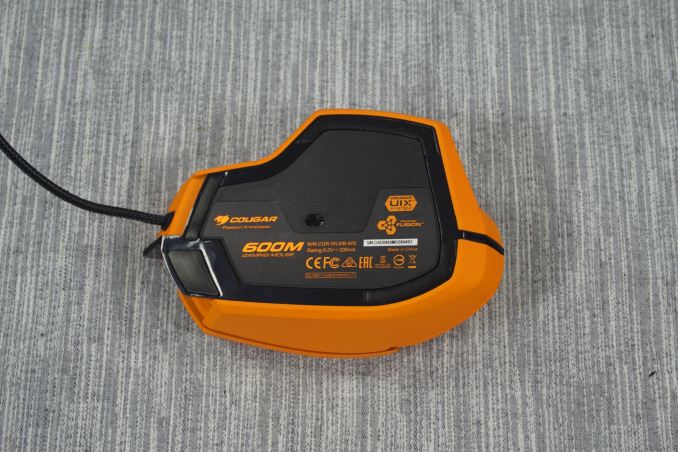 A LED light has been installed beneath the left main key of the 600M. Unlike the overly powerful or extravagant lighting designs of some gaming mice, this approach is providing a subtle and visually pleasing lighting effect. By default, the lighting color is orange but it can be changed to virtually any color, as there is a RGB LED installed. The lighting color can also be bound to different modes/profiles. A simple "breathing" effect can also be selected. At the top left of the main key, four tiny red LED strips can be seen. These simply serve as the DPI level indicators. 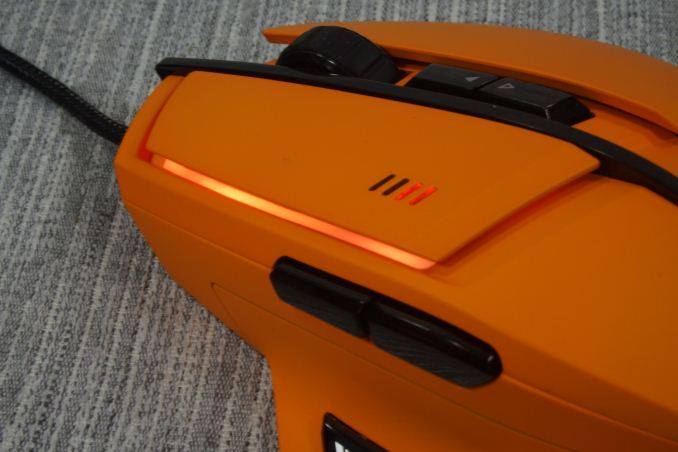 The UIX software can be used to program any of the buttons. We had a thorough look of the software in our review of the 700K keyboard and the 700M mouse. Virtually nothing changes with the 600M, which has exactly the same programming potential and capabilities as the 700M does. Every single one of its eight keys can be reprogrammed to perform simple or complex functions, including macros. The color of the LED can also be adjusted.

After using the 600M gaming mouse for a few days, I should start by pointing out that the 600M is designed for people with a palm grip. Overall the 600M feels very comfortable with a palm grip, while conversely the mouse is nearly impossible to use with a claw grip. Specifically, if you are accustomed to a claw grip, you will hate everything about the 600M. It is far too light for precise movements and it is almost impossible to press the Sniper button without moving the mouse itself, losing your aim. The more secure palm grip ends up being the perfect fit for the 600M, and the lightness of the mouse feels great when wrist/arm movements are necessary. With a palm grip, the weight of the hand itself secures the mouse and prevents it from sliding while pressing the Sniper button. The softness of the body makes the 600M feeling great when in the palm - as long as the mouse is kept perfectly clean, at least.

Personally, I am accustomed to a claw grip and as a result I found it difficult to adjust to a palm grip very quickly. Still, once I was able to adapt the 600M felt very comfortable and performed very well in games. The movements were perfectly precise and I encountered no performance issues.

The wheel however is a double-edged sword. Fundamentally it is very heavy and makes step-like movements while it turns. This is excellent for games, offering command exactness in games that offer selection type menus through the scrolling wheel, such as when cycling through weapons or spells. However in documents, books, and other situations where long scrolling is sometimes necessary, the wheel becomes nearly useless. I had to increase the scrolling speed to a whole page per step, losing all smoothness and accuracy while reading or dealing with long texts.

Meanwhile reprogramming the side buttons and the wheel button to perform in-game functions is very helpful as well, giving you a good number of easy-to-hit buttons to work with for various fnctions. The one set of programmable buttons that likely won't be of much use are the DPI selection buttons; the position of these buttons makes it a little difficult to either perform quick in-game DPI changes or, if reprogrammed, other actions that require haste. To reach those buttons with a palm grip, you will surely have to lift your hand off the mouse. However, I reprogrammed them to perform secondary in-game macros that do not require quick reaction speed and saved myself some time from performing simple but repetitive in-game commands (e.g. "open inventory - switch items - close inventory", etc.).