It's been a busy yet incredibly productive second day at CTIA 2011, and we've been getting hands on with all the latest and greatest from LG, HTC, and Samsung. We've seen a few familiar faces since MWC getting more polished and closer to launch, like the LG Optimus 3D and 2X - turned G2x. We've also gotten hands on with a few more devices that we didn't make it to last time at MWC, including the HTC Flyer and some physical prototypes of the Galaxy Tab 10.1 and 8.9 Read on for our impressions of all these devices. 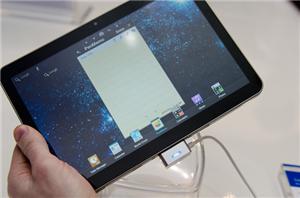 Last month at Mobile World Congress Samsung announced the Galaxy Tab 10.1, a NVIDIA Tegra 2 based Honeycomb tablet. Since then, Apple's iPad 2 raised the bar for ergonomics...