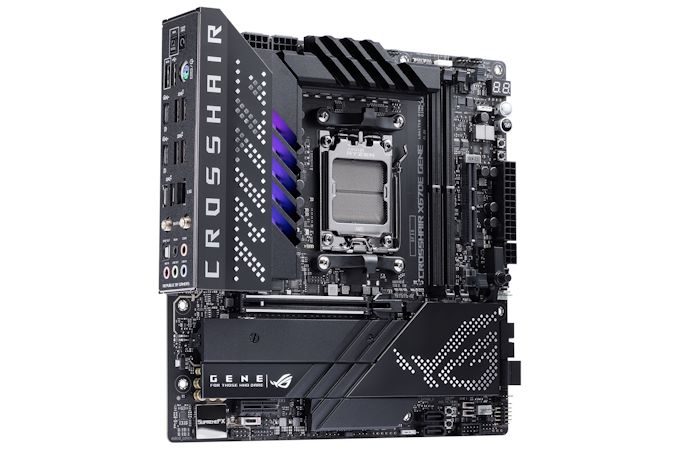 Over the years, multiple motherboards have captivated the market at various price points. Models like the Hero and the Formula are staples of ASUS's premium but popular ROG-themed offerings. One such series that was once the staple of ASUS's Intel models based on the micro-ATX form factor was the Gene, last seen in the days of Intel's 8th and 9th Gen Core series (2019). In what looks to be a resurrection of the Gene series for the release of AMD's Ryzen 7000 processors based on its latest 5nm Zen 4 microarchitecture, ASUS has announced that the Gene is back via the ROG Crosshair X670E Gene.

Throughout the years, the ROG Gene series has been synonymous with highly premium micro-ATX offerings, and it looks as though the ASUS ROG Crosshair X670E Gene is no different this time. Some of the ROG Crosshair X670E Gene's main features include a full-length PCIe 5.0 x16 slot, one PCIe 4.0 x1 slot, and a single PCIe 4.0 x4 M.2 slot. ASUS includes another expansion slot next to the two DDR5 memory slots for an included ROG Gen-Z.2 M.2 add-in card with support for up to two PCIe 5.0 x4 M.2 drives.

The ASUS ROG Crosshair X670E Gene will also feature a 16+2 phase power delivery with premium 110 A power stages, an Intel-based 2.5 GbE, and Wi-Fi 6E networking pairing, as well as support for USB 3.2 G2x2 with Quick Charge 4+ (60 W) capability. ASUS also states that it will also have rear panel USB4 support, although ASUS hasn't provided full specifications to us at this time.

At the time of writing, ASUS hasn't revealed much for the ROG Crosshair X670E Gene, nor how much it is expected to cost or when it might hit retail shelves.