The ASRock X399 Professional Gaming Motherboard Review: 10G For All

Even though the ASRock X399 Professional Gaming is targeted to gamers, its design is not as extravagant as we expected it to be. Perhaps the only thing that stands out in terms of aesthetics are the sharp, futuristic heatsinks. The two heatsinks that cool the processor's VRM circuitry are connected with a heatpipe but there is no extra fan for active cooling. The designer used black color for the PCB and plastics, and preserved the natural color of metal for all metallic parts, creating a nice visual antithesis. RGB lighting is present but limited to the area surrounding the chipset's heatsink, with headers for adding external 12V RGB LED strips. Note that this motherboard does not support RGBW or digital RGBW/UV LED products. 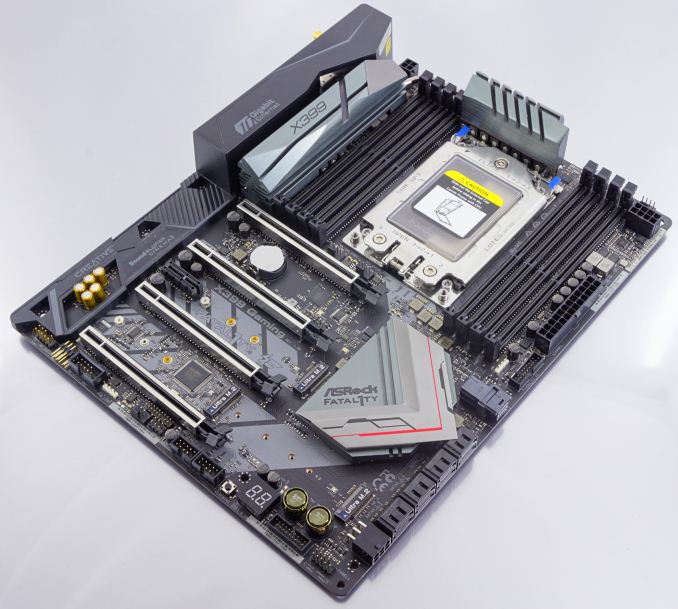 ASRock advertises the X399 Professional Gaming as having an 11-phase design. Actually, the motherboard has an 8-phase VRM circuit that uses the International Rectifier (Infineon) IR35201 digital controller, plus another 3-phase VRM circuit for the SoC. There is nothing irregular here, with ASRock going with a by-the-book approach and installing IR3555 MOSFET drivers (rated at 60A each) and 60A inductors.  The IR35201 is a digital controller by International Rectifier that evenly distributes the load across the eight phases at all times, greatly improving the longevity of the components. The power circuitry is more powerful than that of less costly motherboards, potentially allowing for higher overclocks and, perhaps, compatibility with future versions of the Ryzen Threadripper processor. 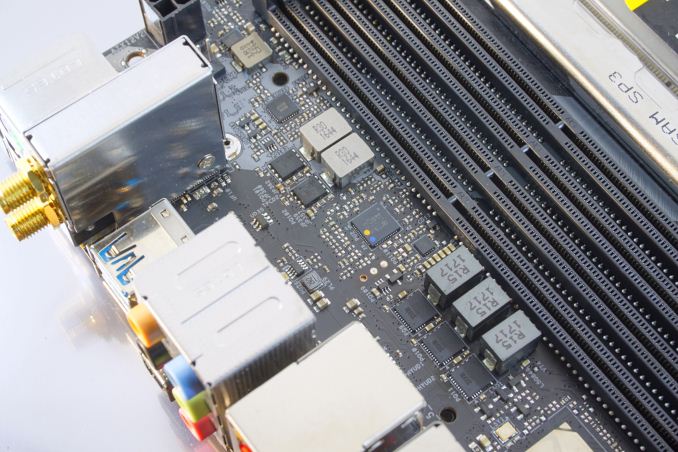 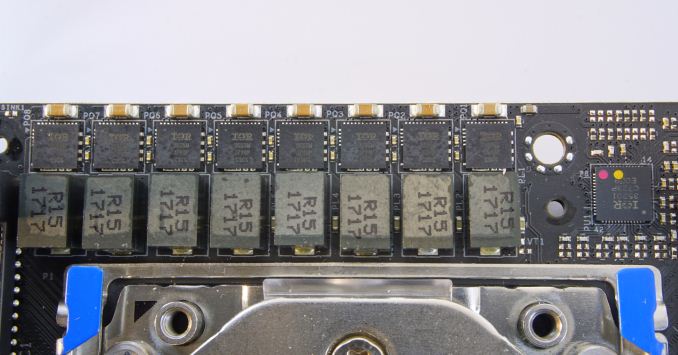 The audio circuitry is interesting. It sports a Realtek ALC 1220 chipset as its core and an additional Texas Instruments NE5532 amplifier for the headphones. The main chipset is rated for a maximum rated sound-to-noise ratio (SNR) of 120dB. To help achieve that performance figure, ASRock physically isolated the right/left channel audio channels on individual layers and is using Nichicon audio-specific capacitors. The sound circuitry supports the Creative Sound Blaster Cinema 3 Software. 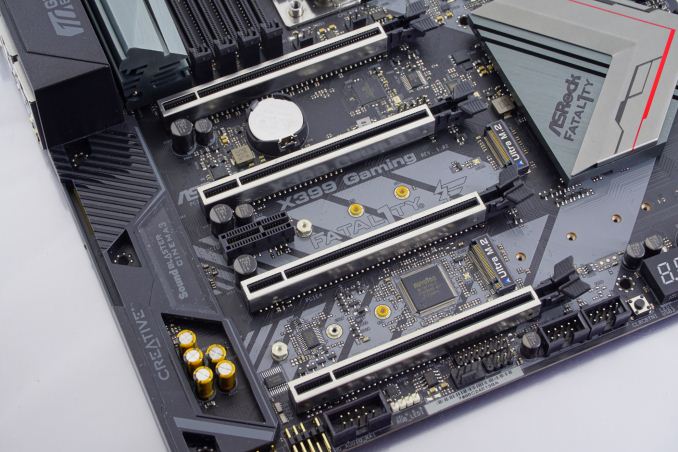 The layout of the ASRock X399 Professional Gaming generally is good but there are some questionable design choices. As expected, most of the internal headers have been placed across the bottom edge of the motherboard. From left to right, there are two front panel audio headers, one standard and one vertical, a COM port header, a header for a 12V RGB strip, a standard 4-pin fan header, a TPM header, an extra power LED/system speaker header, two headers for USB 2.0 ports, a small CMOS reset switch, a debugging LCD, one USB 3.1 Gen 1 header, two gold-colored power/reset buttons, and the system switch/LED header. There is a second USB 3.1 Gen 1 header to the right of the motherboard, right next to the ATX 24-pin power connector. 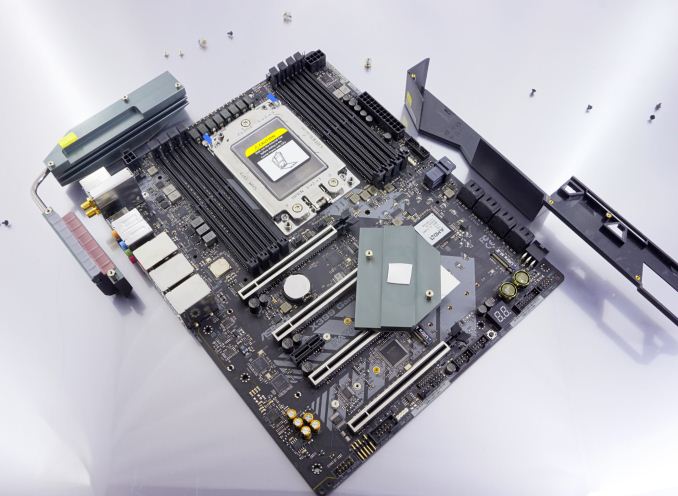 Oddly, ASRock installed a 6-pin PCIe connector on the lower right edge of the motherboard that serves as an additional power source. The use of an extra power connector is not strange on AMD X399 motherboards that support quad SLI but the choice of this particular connector is, as it would force users who want to use four graphics cards to use an adaptor on Molex connectors because mosts PSU will top out at eight PCIe connectors. 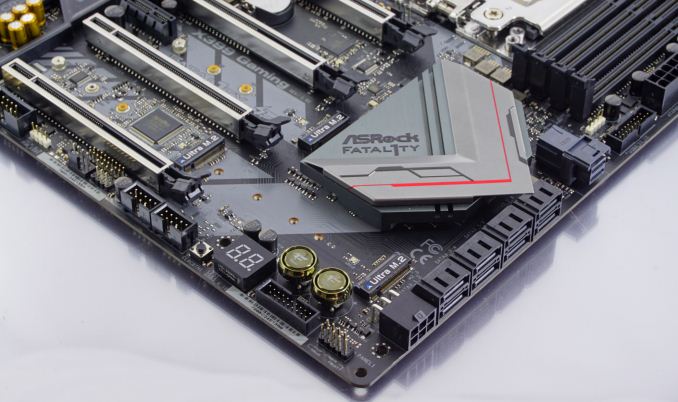 Eight SATA connectors can be seen to the lower right side of the motherboard, all facing rightwards. A U.2 PCIe ×4 connector is present right above the SATA connectors. The ASRock X399 Professional Gaming also has three M.2 PCIe ×4 slots and all three support drives up to 80 mm long - there are no slots that support 110 mm long drives on the ASRock X399 Professional Gaming. One of the slots supports the currently rare ultra-short 32 mm M.2 devices. Unlike with other manufacturers, none of the M.2 slots has any heatsinks. No PCI lanes are being shared between the three M.2 slots, meaning that they can all run at ×4 simultaneously. However, the U.2 slot shares its lanes with the third M.2 slot and will disable this slot entirely should a U.2 device is installed. 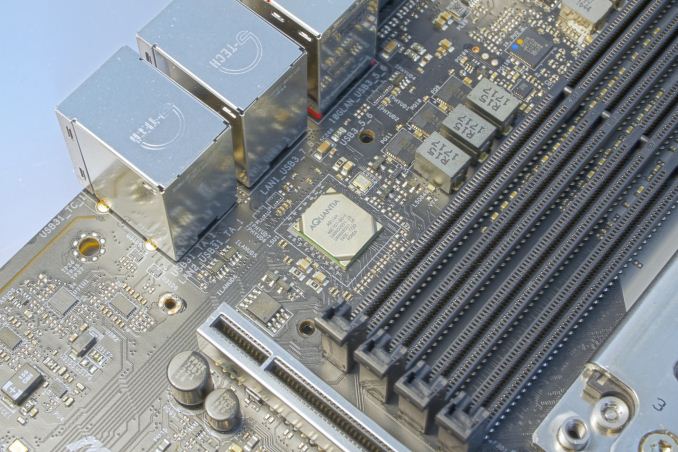 Another odd design choice, as shown below, is the placement of the CPU's EPS power connectors. The 8-pin and 4 pin 12V CPU connectors are placed at the top right and top left side of the motherboard respectively. ASRock advertises this as an advantage, as it creates a wider trace for the CPU's VRMs. The concept is technically sound from an engineering point of view but it also could create compatibility problems because several PSUs have both CPU 12V connectors on a single cable, meaning that an extension would be necessary to reach the second connector on the motherboard. A thicker copper layer would certainly produce better results but, since ASRock is already using a 2oz copper PCB, a thicker copper layer would greatly increase the motherboard's manufacturing cost. Another odd design choice is the placement of two fan headers between the CPU's socket and the first PCIe slot, where they will be practically inaccessible after a CPU heatsink and a graphics card are installed. 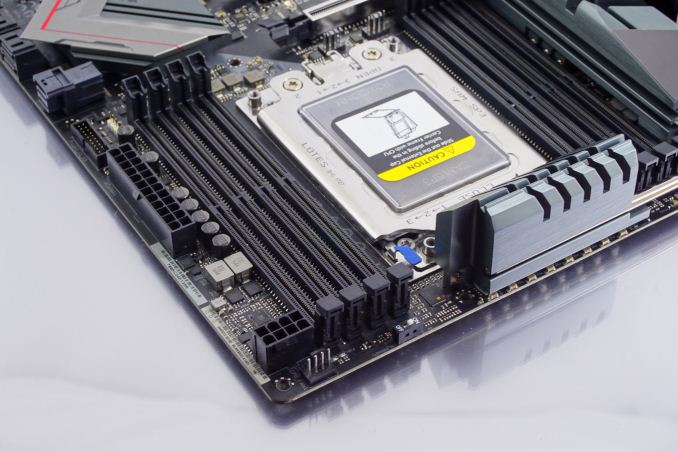 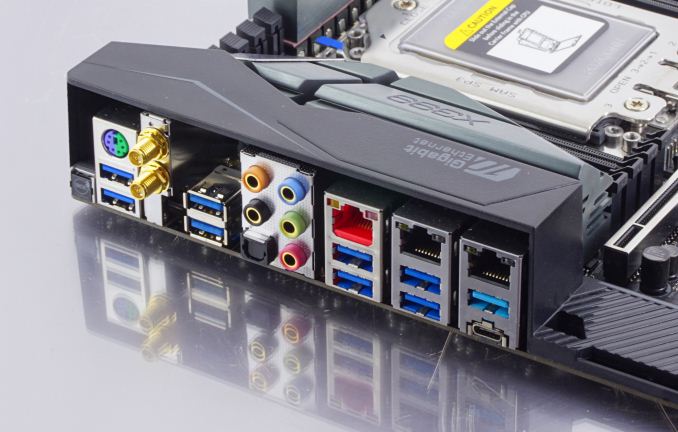