While a few years ago, if you would have asked me what the most important part of a smartphone is, I would have said it’s the screen. In a sense, still many would agree with this today; however I find that smartphones these days have sufficiently good screens that there’s very little to improve on in terms of key characteristics and features. The AMOLED screen of a Galaxy S9 doesn’t offer all that better metrics than that of a Galaxy S6. Of course, there’s new stuff such as HDR, and the displays may have become brighter, but in the grand scheme of things these are just minor iterative improvements rather than defining experiences.

With many vendors now adopting OLED screens in their flagships, I find there’s much less of a differentiation on this aspect of a flagship smartphone. Of course, there’s still a few exceptions to this rule, such as LG notably struggling with the display power consumption of this year’s units, and of course a screen is only as good as it is calibrated.

So leaving the display as less of a major “critical” concern for most of 2018’s flagships, that leaves the SoC as the single most important component. The SoC defines what a smartphone is capable of – from the performance of the phone, to the media features to even how good the camera will perform given the SoC ISP is a key component in this regard. Most importantly alongside performance is of course power efficiency, and both are defined by the design and manufacturing of the silicon SoC.

It’s very much inarguable that 2018 was dominated by the Snapdragon 845: Qualcomm’s SoC powered essentially the vast majority of flagship smartphones, with only a few exceptions in the case of Huawei and naturally of course Apple’s iPhones. Here Qualcomm delivered one of its best SoCs to date, offering an excellent balance between performance and efficiency, all tied together with excellent software driving the hardware. This essentially guaranteed that almost any Snapdragon 845 phone will be an outstanding performer, all while delivering great battery life.

Silicon design is hard and also an expensive billion dollar venture – this is why most vendors rely on commodity components from Qualcomm. On the other side of the spectrum, we have Huawei and Apple as the only two fully vertically integrated vendors, who are also able to design their own silicon. It’s a risky business, however it can also pay off plenty when executed correctly. 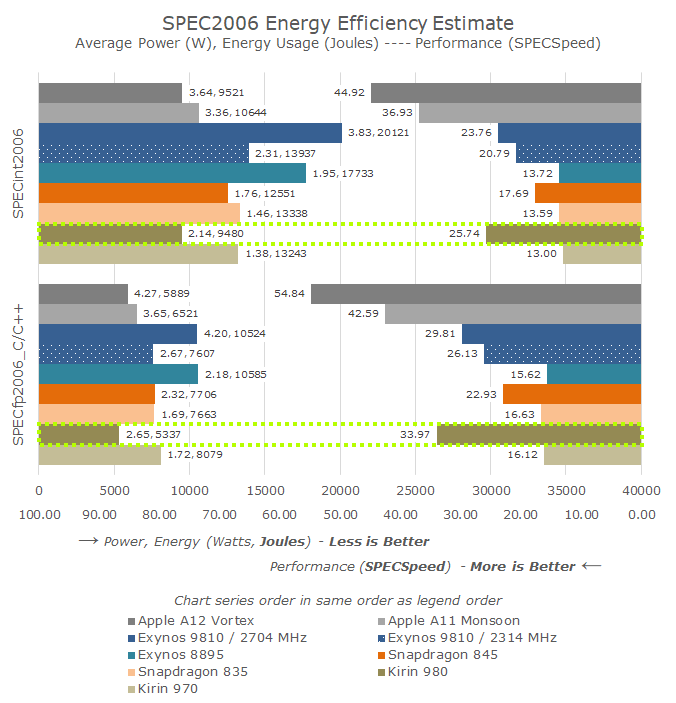 An example of this paying off when executed well, is this year’s Kirin 980 as well as Apple’s A12. The new 7nm chips provided new levels of performance and efficiency, augmenting the products beyond that what can be offered by the competition. Both companies’ chipsets, as well as Qualcomm’s, have showcased fantastic improvements in terms of power efficiency.

Apple’s A12 this year especially was able to outshine the competition as we’ve now seen outstanding improvements in performance.  This year’s performance jump in particular was significant for Apple – showcasing SPECint2006 speed base scores 15% higher than AMD’s Ryzen 2700X, while also not being very far away from Intel’s best desktop CPUs. We’ll be revisiting this performance comparison in the following months in more detail.

While we had some exemplary showcases on one side, on the other hand Samsung’s Exynos 9810 this year was quite a blunder. The chip initially had great promises, with the first “super-wide” core microarchitecture in an Android SoC. In practice however the SoC had massive issues both in terms of software, as well as just lacking the hardware power efficiency to be able to compete. This was felt no better than in Samsung’s own products: The Galaxy S9’s as well as the Note9’s differ in their SoC internals depending on the market. In practice, while the Snapdragon and Exynos variants very much look the same, they feel like very different devices as the latter has a significant performance and efficiency disadvantage.

2018 has continued to see a lot of companies remove the 3.5mm headphone jack from their smartphones. I’ve never really thought this was a good idea, as to me the reasonings that the companies gave just didn’t make any sense to me. Audio inherently is analog, and moving the internal audio DAC (which was fairly high quality) from being inside the phone to a lower quality DAC being just outside the phone on the connector is one of those things that still boggles my mind till today.

Much of the argumentation in favour of its removal was somehow increased internal space for other components. This seemed a far-fetched marketing argument that just didn’t hold up in practice, as essentially no vendor besides Apple (with the bigger taptic engine) has done anything of substance with the space.

The recent OnePlus 6T is the most abhorrent example of this as its headphone jack removal has done nothing to change the internal component dimensions on the bottom of the phone, and in place where the jack would be, we find… a slightly shifted vibration motor, and nothing else. This very much looks to be a calculated business move rather than a decision based on any kind of technical merits.

What really does boil my blood though isn’t just the argumentation that it saves on internal space, but that it somehow improves audio quality. Unfortunately this is again just a bad misconception that over the last year or two has now reached absurd levels. The one true technical benefit of having the DAC tightly coupled with a pair of headphones, is that you can tune the DAC to the precise frequency response of the drivers of those headphones, because well, it will never power anything else.

In particular this year’s two most prominent USB-C audio devices, Google’s Pixel USB-C earbuds as well as OnePlus’ Type-C Bullets fail at this exact promise: Google’s units in my experience just have abysmal audio, and you can do nothing about it as the phone offers absolutely no way to tune the audio output. If you plug the headphones in any other device, most of the time you’re also out of luck as most device’s audio equalisation options rely on hardware acceleration via the built-in DAC – but because USB-C audio is just digital pass-through, you’d have to resort to third-party software than pre-processes things on the CPU at increased battery drain.

Again as an example, OnePlus' marketing is very questionable in regard: On their webpage we see the quote:

Based on this you would expect the Type-C bullets to offer fantastic sound out-of-the box, yet there’s a hiccup: While the units do sound much better than Google’s, they’re still a far cry from optimal. In the OnePlus 6T’s audio settings we find a “Sound enhancement” option, and here we see OnePlus here provide equalisation presets for a set of popular headphones, among which is their new Type-C bullets. Enabling this option gives a much more optimal frequency response which does notably improve the audio experience. 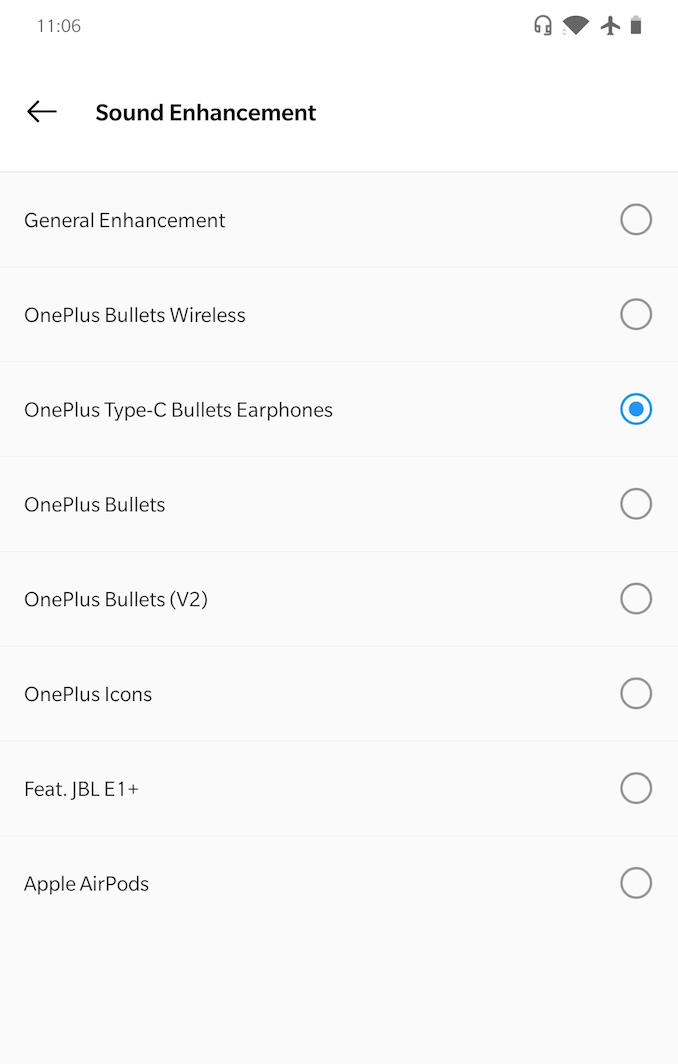 Now the question here for me is: Why is this a software option on the phone rather something pre-baked into the Type-C Bullet’s DAC out of the factory? Do I also need to mention that in order to use the Type-C headphones on previous OnePlus devices you need to enable OTG in the settings (Which automatically turns off after 10 minutes), and even with this enabled, the OnePlus 6 currently doesn’t even actually offer the equalisation features of the 6T, as it’s only enabled for 3.5mm connected headphones.

3.5mm dongles have also been a complete disaster in the Android ecosystem: To date most smartphones relied on relatively high quality Qualcomm or Wolfson/Cirrus Logic DACs inside the phones, with Qualcomm in particular having made some fantastic strides in audio quality with their in-house ASoCs over recent years.

The same cannot be said of the commodity USB-C to 3.5mm dongles released to date; none of these are even remotely comparable with the performance of good internal DACs, and particularly Google’s bundled units are disastrous in terms of their analog output quality. Here I have to give credit to Apple: the company still seems to be the only one being able offer a 3.5mm dongle who has competitive analog audio output with little compromises. I would not be surprised if Apple’s recently released USB-C to 3.5mm dongle to be vastly superior in audio quality compared to anything offered by Android vendors.

To add insult on top of injury – companies are now starting to advertise the lack of a headphone jack as a premium feature. We addressed the OnePlus 6T, but also Huawei’s Mate 20 Pro not having a headphone jack, while its lesser sibling, the Mate 20 having one, is again some sort of nonsensical product segmentation which seems to be designed to simply generate more accessory sales. In this case you’re paying more for a phone to have a lesser feature. 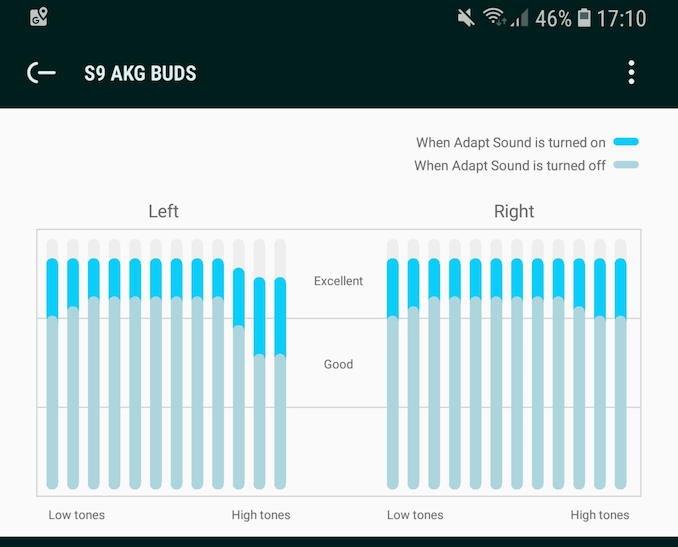 Samsung, and partly LG, seem to be the only companies who are resisting this anti-consumer trend. Here Samsung in particular seems to have absolutely no issues in “managing its internal component space”, all while providing the best audio experience in the mobile space. It still surprises me that Samsung is still the only company to offers an actual audio calibration option via its Adapt Sound feature – a psychoacoustic feedback equalisation feature that will tune the audio output of its internal DAC to an experienced flat frequency response based on your particular headphones and your particular hearing. I vehemently urge Samsung to continue on their current path, as the competition can't seem to stop blindly shooting themselves in the foot.

Overall, 2018 has been a year of sheer stupidity when it comes to the topic of audio, 3.5mm headphone jacks, and USB-C audio. Companies will need to reconsider their strategies, and consumers who value actual good audio quality will need to vote with their wallets.