The OnePlus 7 Pro Review: Outstanding Performance & Screen, Adequate Everything Else

One of the key aspects of the new OnePlus 7 Pro is its promised performance. OnePlus now for a few generations has made a large focus on the performance of their devices, opting to go the extra mile to optimise the software experience of their devices and the OS software. The new 7 Pro promises to thus to differentiate itself from other Snapdragon 855 devices.

Another way that the performance of the OnePlus 7 Pro should be much improved compared to the competition is the inclusion of UFS 3.0 storage as well as the new 90Hz display. Admittedly our testing setup for NAND is currently inadequate to fully test the storage speed, however the 90Hz refresh rate does have some immediate effects on some benchmarks, in particular our favourite, PCMark. 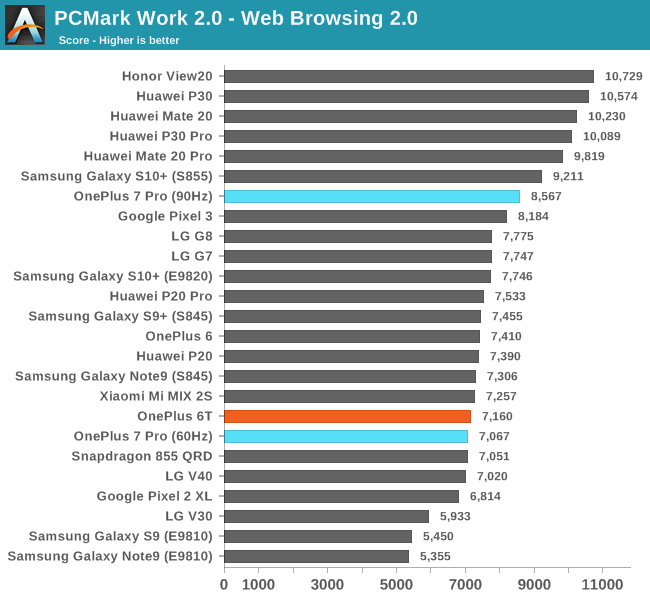 In PCMark’s web browsing test, the OnePlus 7 Pro showcases some larger score discrepancy between its 60 and 90Hz modes. What is interesting is that the 60Hz score is unusually low, performing quite a lot worse than what we saw from other Snapdragon 855 devices who are 60Hz themselves as well. The 90Hz mode does up the score notably, however it still slightly lags behind the Galaxy S10+ as well as all other Kirin 980 powered devices. 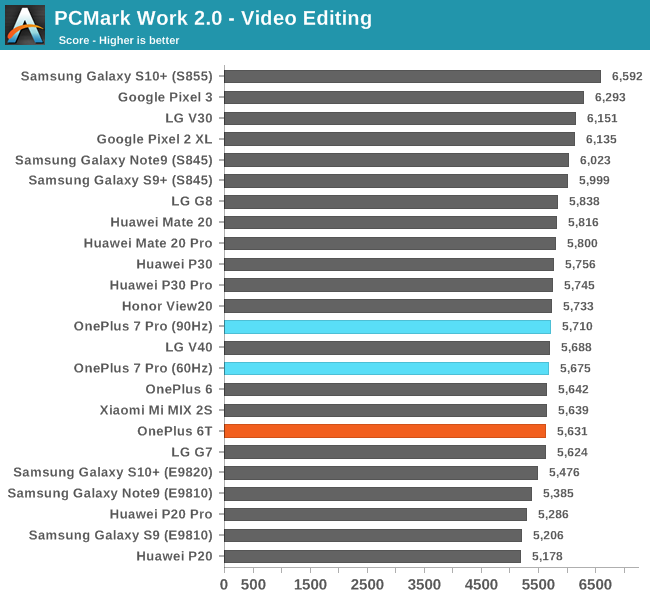 The video editing score is in line with the majority of the pack, but again the OP7Pro is lagging behind the Samsung S10+ with the Snapdragon 855. 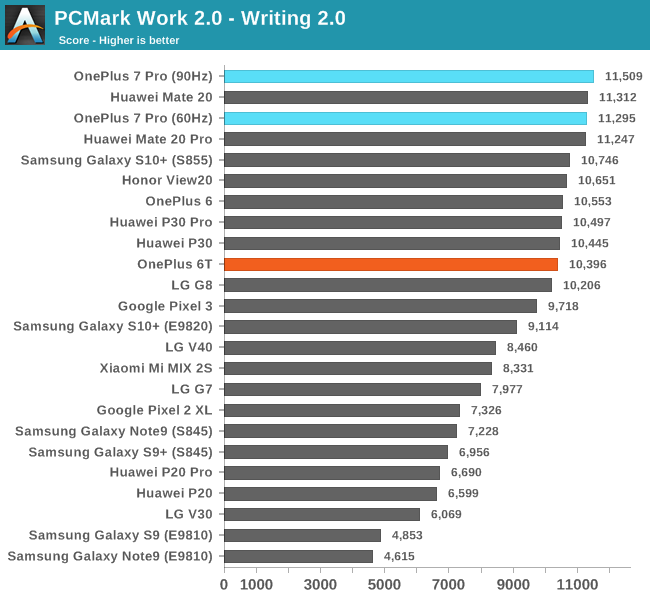 It’s in the writing sub-test, arguably the single most important workload of PCMark where the OnePlus 7 Pro manages to distinguish itself more compared to other devices. Here both in 60 and 90Hz modes the device manages to take the top spots in the charts. 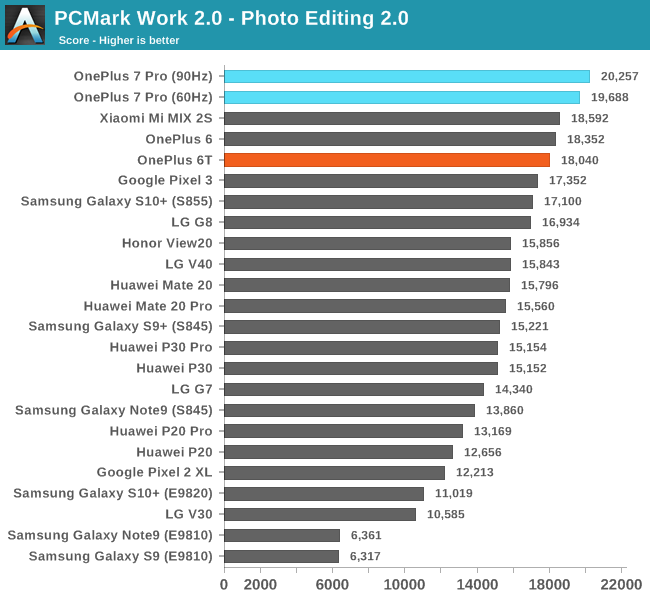 The photo editing workload is also an important indicator of general device snappiness. Here the OP7Pro again beats the competition from Samsung and LG with the same SoC. I think it’s possible that OnePlus has better and more optimised OS libraries and this is why this is seen as a performance advantage compared to the competition. 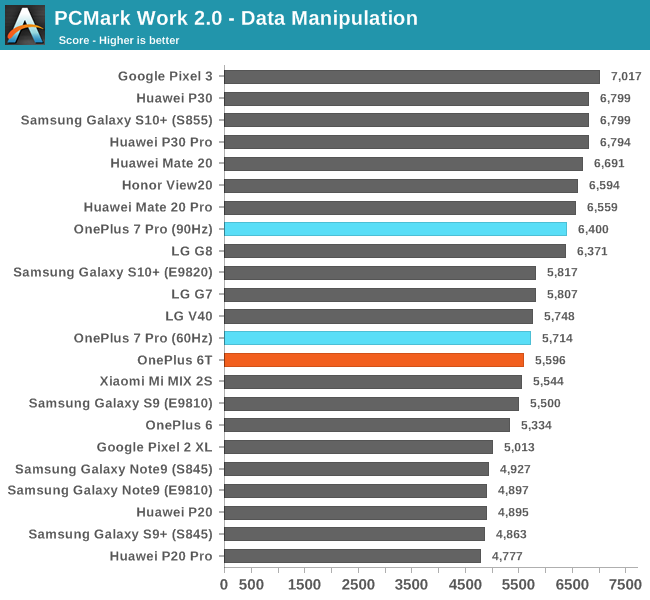 The data manipulation score again has a notable difference between the 90Hz and 60Hz modes, but much like the web-browsing test we’re again seeing some oddly low performance of the 60Hz mode, much below that of other Snapdragon 855 devices. 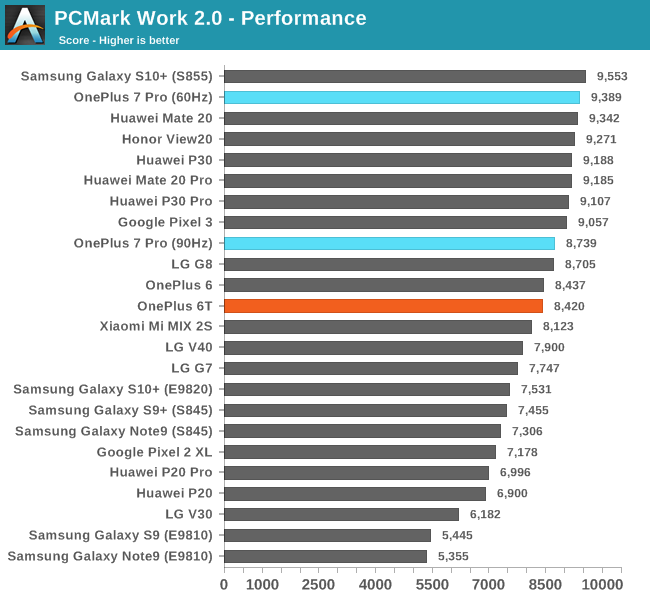 Finally the end-score of the OnePlus 7 Pro ends up just shy of the Snapdragon Galaxy S10+, losing some yet winning others. The 60Hz mode does have an effect of the score and in this mode the OP7Pro loses a few hundred points. 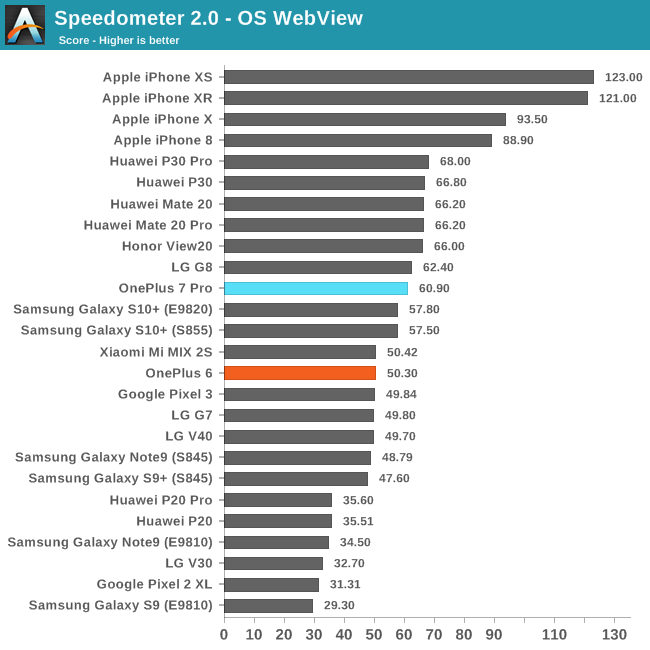 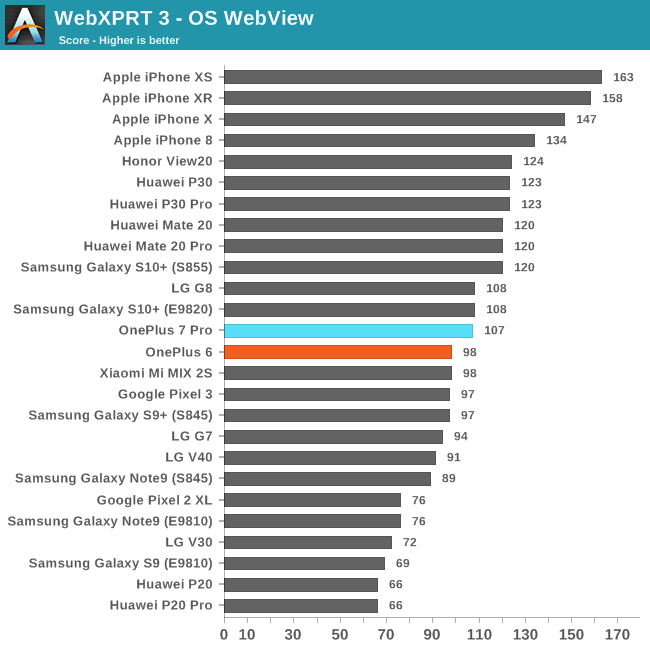 In the Javascript web-browsing benchmarks the OP7Pro is relatively in line with the LG G8. The odd thing here again is that Samsung’s Galaxy S10+ with the same chip offers a quite different performance fingerprint. This is particularly visible in WebXPRT where it has a lead over the OP7Pro. It’s to be noted that in the web benchmarks I haven’t seen any difference in scoring whether the device was in 60 or 90Hz display modes.

Device Performance Conclusion – A Lot Not Covered By Benchmarks

While the OP7Pro performed quite well in our system benchmark suite, there’s a few aspects of the phone that unfortunately aren’t really covered. One such things is the NAND storage and the experience that the 90Hz mode gives.

In terms of the new UFS 3.0 storage, its addition to the phone was something that I immediately noticed in regards to application installation speeds. Here the OP7Pro was significantly faster than any other Android device I’ve had before, shaving off significant chunks off of installation times.

Another subjective aspect that is hard to objectively convey in benchmark numbers is simply the vastly improved UI fluidity brought forth by the 90Hz refresh rate of the phone. Any PC user with a higher refresh rate monitor will know what an immense difference this makes compared to the more traditional 60Hz. The very first time I held the OP7Pro at our pre-briefing I immediately saw the massive difference this makes to the fluidity of scrolling and very much knew that this would be the killer feature of the phone, no matter how all other aspects would end up.

While in terms of UI snappiness, the OnePlus 7 Pro isn’t any faster than say Samsung’s S10, its fluidity just stands out as something beyond any other current device (Asus Rog Phone & Razer phones aside). OnePlus’ combination of high-refresh rate on an OLED screen makes for an incredible selling point.

While the 90Hz is fantastic, I have some serious doubts about the 60Hz mode of the phone and whatever OnePlus did to the software stack in terms of implementing this. For some odd reason, it makes things notably slower, and I’m not just talking about simply there being less frames, but actual reduced responsiveness and an impression of more sluggishness and jank. In fact, in 60Hz mode the phone feels notably more sluggish than the Galaxy S10, when in theory it should have been equal. The fact that the OnePlus 7 Pro somewhat performs more similar to the G8 in some web benchmarks has me suspect it actually has similar BSP performance issues, and the 90Hz mode somehow just counter-acts these negatives. It’s really odd.

That being said, just stick with the 90Hz mode and you’ll have a fantastic experience beyond that of any other phone out in the market right now.