We’ve covered in detail across multiple articles the story of Intel’s turbo: about how the TDP on the box doesn’t mean a whole lot, the motherboard you’re using can ultimately determine how long your CPU does turbo for, and how the power limits of the processor are ultimately decided by the motherboard manufacturer’s settings in the BIOS unless you change them. Intel only gives recommendations on peak turbo power and the length of the turbo: the only thing Intel defines is the peak frequency based on load when turbo is allowed.

This means that an extremely conservative system might not allow the power to go above TDP, but the system capable of all the power might allow the processor to turbo ad infinitum. The reality is usually somewhere in the middle, but for a high-end desktop platform, where most of the motherboards are engineered to withstand almost anything that comes at it, we’re going to often see the situation of an elongated or persistent turbo.

It’s worth noting that for consumer workloads, most of the work can happen within a reasonable turbo – and thus sustained performance metrics aren’t that important. But today we are testing high-end desktop hardware, and because Intel doesn’t explicitly define peak turbo power or turbo length (it only provides recommendations that motherboard manufacturers can and do ignore), I obviously asked Intel what it believes that reviewers should do when trying to compare performance. The answer wasn’t very helpful: test with a range of motherboards’.

For this review, we’re using ASRock’s X299 OC Formula motherboard. This is a motherboard designed for high-end and extreme overclocking, and is built accordingly. As a result, our sustained turbo and power limits are set very high. This is a HEDT system, and most HEDT motherboards are built and engineered this way, and so we expect our results here to be consummate with most users’ performance.

For our power consumption metrics, Intel actually does some obfuscation on its high-end platform. Unlike AMD, we cannot extract the per-core power numbers from the internal registers during a sustained workload. As a result, all we get are total package numbers, which show the cooling requirements of the processor but also include the power consumption of the DRAM controller, uncore, and PCIe root complexes. 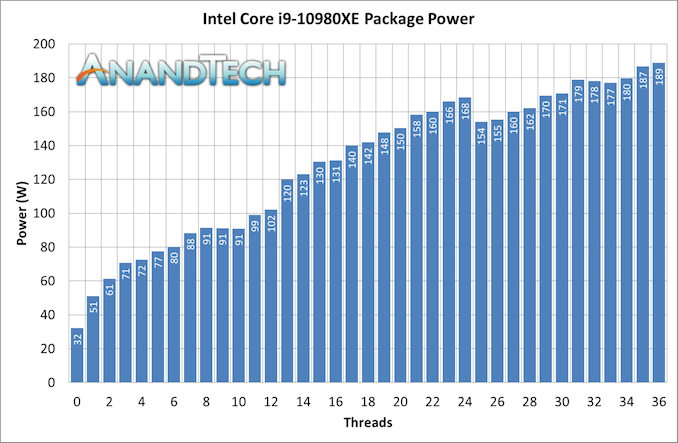 The TDP of this chip is 165 W – normally Intel recommends a peak power of 1.25x, which would be 207 W, and so the 189 W value we see is under this. The chip we got is technically an engineering sample, not a retail part, although we usually expect the final stepping engineering samples to be identical to what is sold in the market. Despite this, your mileage may vary.

When we compare this peak to other CPUs: 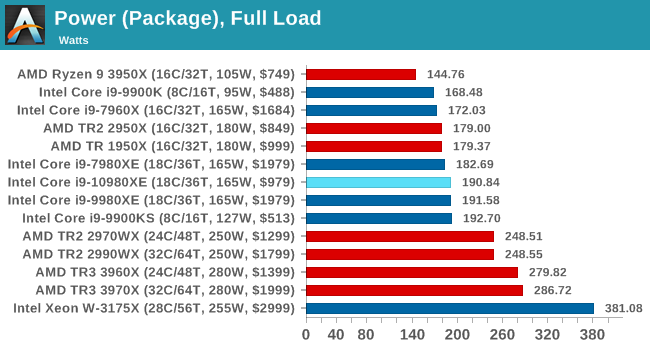