With each successive new Wi-Fi standard, there are almost always improvements to the wireless speed and latency, and that continues with Wi-Fi 6, but the latest standard also improves power efficiency, and likely most importantly, helps address some of the typical issues with Wi-Fi in very crowded environments.

Let’s start with the last point, since it is arguably the most important. As Wi-Fi has become ubiquitous, and as the number of connected devices has grown, one of the biggest issues it has become susceptible to is overcrowding of the spectrum, which can cause even the best networking equipment to slow to a crawl. This is especially obvious in dense urban environments, or stadiums, or theme parks and the like.

Only a few years ago, even mid to high tier laptops would ship with just 2.4 GHz 802.11n (Wi-Fi 4) network adapters. If they were to be used in a dense apartment complex, the resulting performance would be abysmal. Moving to the 5 GHz range provided some temporary relief, partly because of the reduced range of the 5 GHz signal, meaning neighboring access points would be less likely to interfere, but also due to 5 GHz offering significantly more channels. 2.4 GHz can only provide a maximum of three non-overlapping channels, but depending on the regulations of each country, there are a total of fourteen total channels, each being 22 MHz wide, but offset by only 5 MHz, so channels side by side will interfere with each other. On the 5 GHz side, there can be up to 23 channels, and none of them overlap. 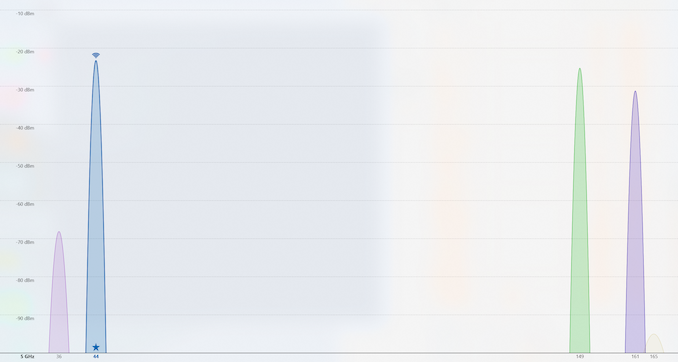 5 GHz Channel Use in my home

If you needed range, 2.4 GHz was still your best bet due to the attenuation of the 5 GHz signals through solid objects like floors and walls, but in a dense environment, 5 GHz was practically a must-have for any wireless communication. 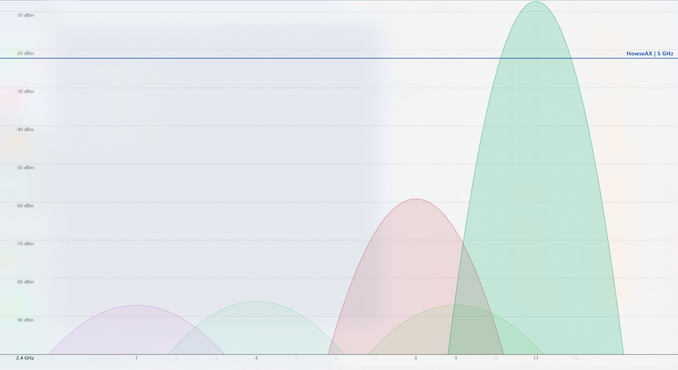 2.4 GHz Channel Use in my home

But even the 5 GHz space is now getting stretched to its limit, so the Wi-Fi Alliance has added some features to address the crowded spectrum directly. One of the major additions to combat this is Orthogonal Frequency-Division Multiple Access, or OFDMA, which breaks the spectrum into time-frequency resource units, which are coordinated by the access point. These resource units can be allocated to multiple connected devices, allowing them to transmit over the same channel at the same time, as long as the total bandwidth does not exceed the channel width. Previously, every transmitting device would occupy the entire channel for the entire time it was transmitting, so if multiple devices were competing, they would have to wait their turn using Time-Division Multiple Access, where each device would be given a slice of time to transmit. OFDMA spreads out channels to many clients, which can be very beneficial, especially if no single device requires all of the available bandwidth. In addition, Wi-Fi 6 allows for dynamic fragmentation of the packet size, allowing the device to fill available resource units with smaller packets, unlike previous Wi-Fi which required a fixed packet size.

Another interesting trick the Wi-Fi Alliance has added to combat crowding of the spectrum is Spatial Frequency Reuse, which allows devices to figure out if signals that are being transmitted are part of their network, or part of a neighboring network. This means that, for example, two people in an apartment complex were both using Wi-Fi 6 access points and devices, the devices connected to their own access point would be able to read a marker on the channel transmission and determine if that transmission is on their network or not. If it is not, and if the power levels are sufficiently low, the wireless device would be able to also transmit on the same channel at the same time. The devices would adapt their power levels for transmission to avoid them actively interfering with each others’ transmissions.

In addition to this, Wi-Fi 6 also adds an additional network allocation vector (NAV) which should help prevent packets being reset by overlapping networks.

Even with these changes, the Wi-Fi Alliance knows that there is still only a fixed amount of bandwidth even in the 5 GHz range, and as such 6 GHz support is already in the specification, although it will be limited to devices labeled as Wi-Fi 6E, to keep things at least a bit confusing.

A Bonding Moment – Doubling Down on Performance

Although the nominal channel bandwidth for Wi-Fi is 20 MHz, the Wi-Fi specifications have allowed for bonding of multiple channels together to provide higher performance channels. Wi-Fi 4 allowed for 40 MHz channels, and Wi-Fi 5 allowed for 80 MHz and 160 MHz, although the latter was optional, and we didn’t really see it in the PC space until recently. Because it was not a requirement, many Wi-Fi 5 access points and routers did not support it, even if you had one of the most recent wireless adapters which even offers 160 MHz support. Wi-Fi 6 supports the 160 MHz channel width, so we should see more devices adding support. But a drawback of bonding is that it requires concurrent channels to function, and with a limited number of channels, if you had a lot of interference on one channel, it could cause issues. This has somewhat been addressed in Wi-Fi 6 with “80+80” bandwidth, which means that the 160 MHz bonded channel can be made up of two different sets of 80 MHz channels. This was again available in the previous spec, but optional.

To further increase performance even further than just wider channels, Wi-Fi 6 also adds support for an even higher level of Quadrature Amplitude Modulation (QAM), from 256-QAM in Wi-Fi 5, to 1024-QAM in Wi-Fi 6. This moves from 8 bits per tone to 10 bits per tone, allowing more data to be transmitted over the same channel bandwidth. This means that a single 1x1 20 MHz channel can transmit at a maximum of 143 Mbps, and on a typical laptop with a 2x2 Wi-Fi adapter on 160 MHz channels can connect at 2.4 Gbps. The same 2x2 solution on a typical Wi-Fi 5 access point with the typical 80 MHz channel width offers just 867 Mbps, so the jump in performance for Wi-Fi 6 is significant.

In addition, Wi-Fi 6 adds in support for Multi-user Multiple-input and Multiple-output (MU-MIMO) to the uplink connection as well, where Wi-Fi 5 only offered it on the downlink side.

The eternal question with networking is when is a good time to upgrade, and do the latest and greatest additions to the specification provide tangible benefits right now. This is always complicated on Wi-Fi by a lag between access points or routers and devices, and what the upgrade cadence is. Wi-Fi 6 is new enough that many people may not own devices that even support Wi-Fi 6, so upgrading to a new router or access point without devices supporting the new Wi-Fi 6 standard will mean that your devices are still leveraging Wi-Fi 5 or below, meaning there isn’t really a good reason to jump. If you are in the market for a new router or access point anyway though, clearly it is in your best interest to get the latest specification of the standard.

Where Wi-Fi 6 is going to add real-world benefit though is in a couple of scenarios. If your wireless spectrum is very crowded due to being in a dense urban environment, Wi-Fi 6 makes some significant upgrades to its networking stack to help address just that type of use-case. In addition, if you’ve got dozens of devices fighting over Wi-Fi, it may make sense, although the best benefits are achieved when both the access point and client are utilizing Wi-Fi 6.

Performance is also dramatically increased over Wi-Fi 5, so clearly in performance-bound scenarios, the upgrade may be worth the investment, although the tricky part about Wi-Fi 6 is that for the most common 2x2 scenario, where there are two transmit and two receive channels, Wi-Fi performance finally surpasses that of the typical Gigabit Ethernet that most people have in their homes, so although the performance will still be higher than Wi-Fi 5, Gigabit may be a bottleneck, and if so, additional networking equipment may be necessitated. There has been some movement on the multi-Gigabit Ethernet for the consumer, but less than we’d have expected at this point, so Wi-Fi to Wi-Fi may be the least-expensive option for best performance.