The NUC 9 Extreme Kit is packaged in a fancy hard casing, signifying its premium nature. Since we had a system configuration essentially ready to benchmark, the package contents only included a few manuals and regulatory information notes along with a US power cord. 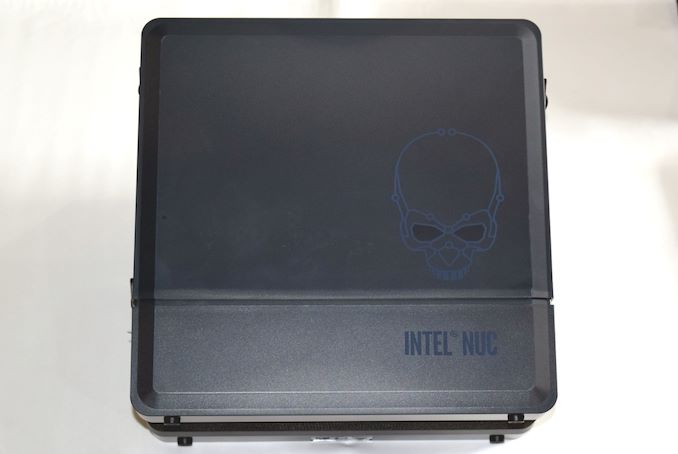 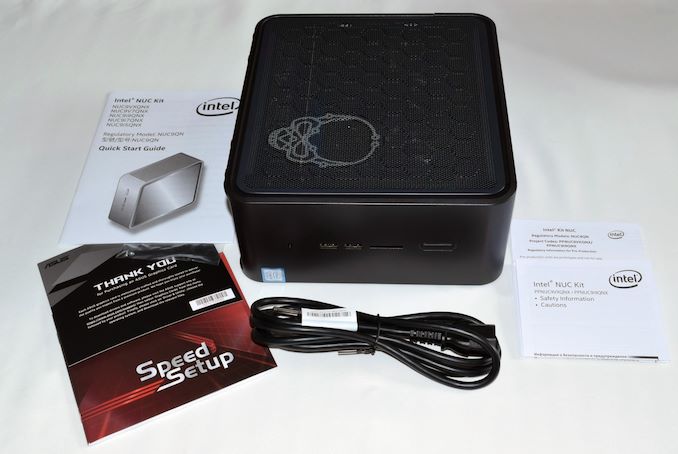 We noted the re-design of the Visual BIOS in our Frost Canyon NUC review. The NUC9i9QNX also uses the same re-designed interface. Unlike the mainstream NUC10i7FNH, the NUC9i9QNX has a few enthusiast options including the ability to fine-tune the DRAM timing parameters from a performance perspective. The entire gamut of options available in the latest BIOS (v0034) of the NUC9i9QNX is brought out in the gallery below.

The specifications of our Intel NUC9i9QNX review configuration are summarized in the table below.​

The block diagram of the components of the NUC9i9QNX are presented in the diagram below. 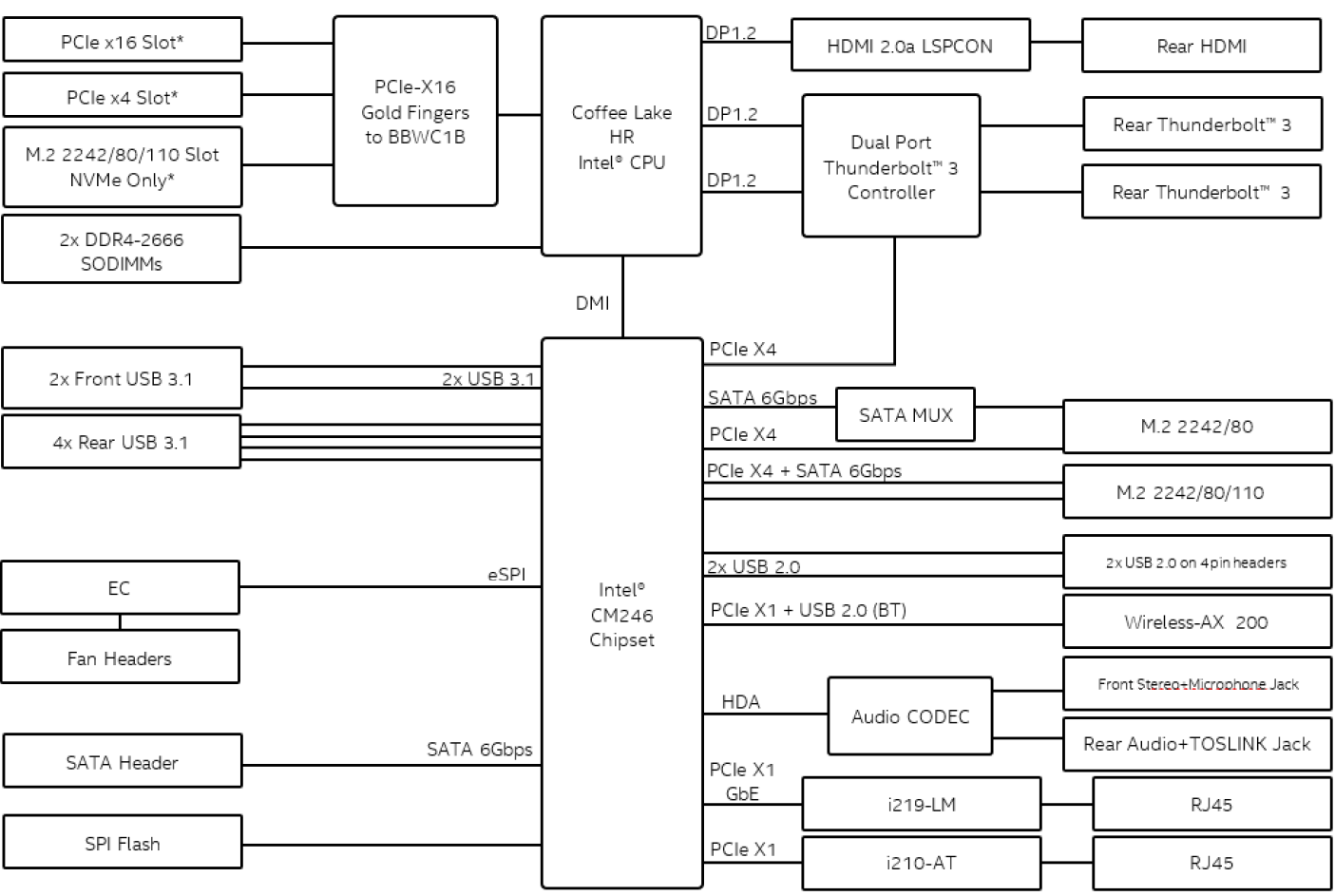 One of the aspects that needs to be pointed out here is that the 2x Front USB 3.1 ports specified in the diagram above are physically the ones on the Compute Element, and not on the front panel of the chassis. The diagram does bring out the PCIe lanes bifurcation in the baseboard, though.

Our review sample came with Windows 10 Home x64 pre-installed, but, we wiped the drive and installed Windows 10 Enterprise x64 1909 along with the March 2020 cumulative updates prior to benchmarking. Our initial benchmarking and reports collection was done without opening up the system. The AIDA64 system report for the hardware configuration supplied by Intel provided the following information:

We were puzzled by the discrete GPU operating in x8 mode instead of x16 (as it could affect gaming performance). After reaching out to Intel, we got additional context for the review configuration. As noted briefly a bit earlier, the M.2 slot on the baseboard is directly attached to the CPU, using PCIe lanes from it rather than off of the chipset. So the power-hungry, but high-performance 905p Optane drive in the baseboard slot makes sense in that context, as Intel is giving it the best possible (and least contested) connection to the CPU in order to highlight the capabilities of CPU-attached storage.

As evident from the block diagram, the Thunderbolt ports, USB ports, and the M.2 slots on the Compute Element are attached to the chipset, which means sharing the DMI link and its maximum bandwidth of PCIe 3.0 x4 (4GB/s). Which compared to typical systems, is actually a lighter load than usual; by hanging the Optane drive off of the CPU, there's less contention for the rest of the DMI link's resources, enabling additional testing areas such as elimination of noise from Thunderbolt 3 testing and allowing for RAID-0/1 on the Compute Element. Overall this opens up a few different configuration options, so in order to highlight the pros and cons of splitting the x16 slot with a SSD, we also tested the NUC with the Optane drive hanging off of the PCH, giving the video card a full x16 slot's worth of bandwidth. This is noted as x16 in the rest of the review to signify the operation of the RTX 2070 in x16 mode.

The AIDA64 system report for the x16 configuration has a slightly tweaked version of the PCIe lane usage specified earlier:

The NUC9i9QNX is a relatively unique system. We have evaluated SFF systems with discrete GPUs in the last few years. Systems such as the Hades Canyon NUC came with a co-packaged discrete GPU leaving no scope for the end-user to upgrade the graphics performance without buying an entirely new computer. We've also had systems with a real discrete GPU such as the ASRock DeskMini Z370 GTX1060 and the Zotac ZBOX MAGNUS EN1080K. Theoretically, users could upgrade the installed MXM card to get better graphics performance, but practically speaking, MXM card upgrades are incredibly rare and almost never officially supported by system manufacturers.

This leaves us with one true precursor to the Ghost Canyon NUC - the Zotac ZBOX MAGNUS EK71080. This 5.7L compact gaming powerhouse internally sports a single-fan version of the Zotac GTX 1080 Mini complete with the external PCIe power connector, and nothing preventing the end-user from replacing it with a similar-sized GPU. Obviously, Zotac would not officially support this, but it only serves to show that accommodation of user-replaceable discrete GPUs in compact SFF systems has been possible before. The Compute Element initiative from Intel has been accompanied by the creation of an ecosystem where add-in card vendors now have an incentive to create discrete GPU cards within the 202mm x 131mm form-factor. Along with chassis designs like the one in the NUC9i9QNX, this has now enabled sub-5L systems capable of sporting powerful user-replaceable discrete GPUs.

In the table below, we have an overview of the various systems that we are comparing the Intel NUC9i9QNX against. Note that they may not belong to the same market segment. The relevant configuration details of the machines are provided so that readers have an understanding of why some benchmark numbers are skewed for or against the Intel NUC9i9QNX when we come to those sections.