GPU performance of the new A14 is something that wasn’t very clearly presented during the launch of the new iPhone 12 series. Apple had first introduced the A14 within the new iPad series where it had promised performance increases relative to the A12, not the previous generation A13, and with a bit of math this resulted into a translated 8.3% generational increase which is rather smaller than we had expected given Apple’s recent GPU trajectory over the years. Furthermore, this was also the first release where Apple compared itself to the Android SoC competition which is something the company doesn’t usually do. All these factored into some rather low expectations for the GPU of the A14 – so let’s see how that pans out in practice: 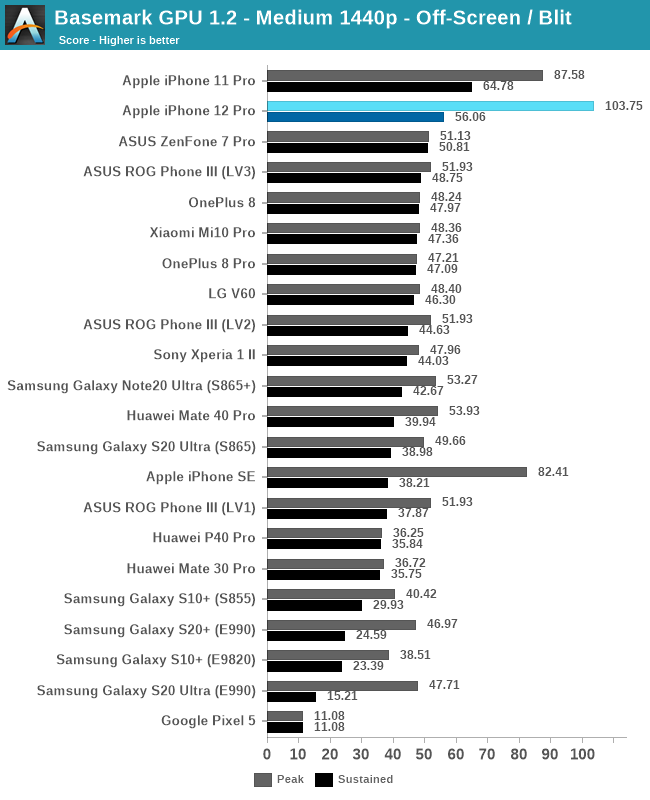 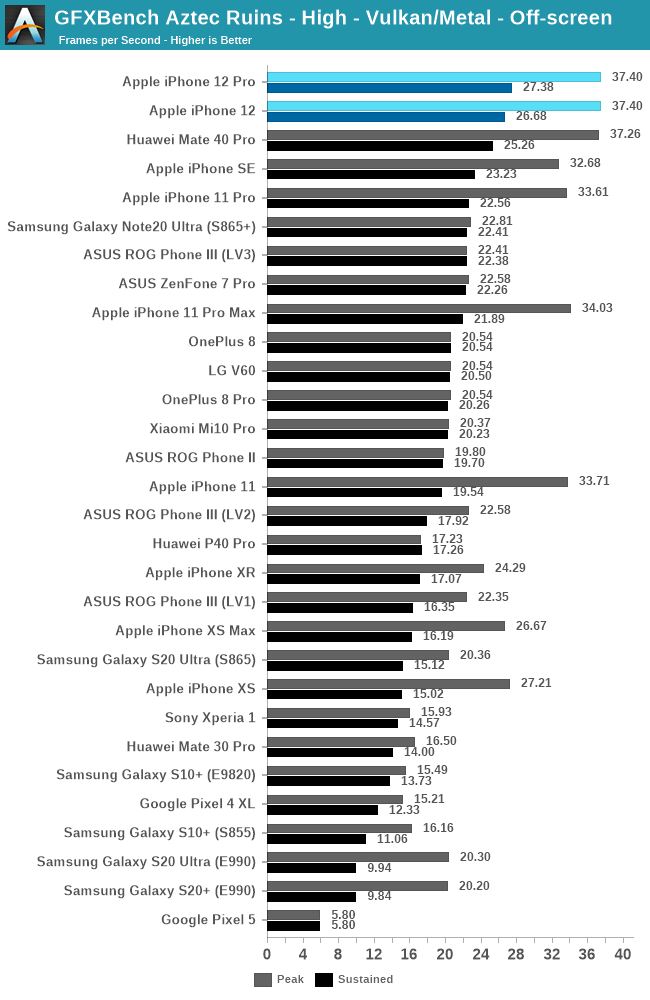 In the Aztec High test, the iPhone 12’s fare a bit better in their sustained performances, with the new chip showing a 21% increase in performance generationally. The peak performance figure is only 11% higher but generally this isn’t the figure that is important for gaming experiences on iPhones.

Looking at the power consumption of the new phones, we see again that both the peak and throttled performance figures of the new chip isn’t all that much different to the previous generation, as we’re seeing roughly 8% better performance at almost the same power envelope of around 3.9W. The peak power figure of the new chip seems to have been reduced this generation and that’s very much a welcome change, and that’s where the efficiency sees the largest delta to the A13. 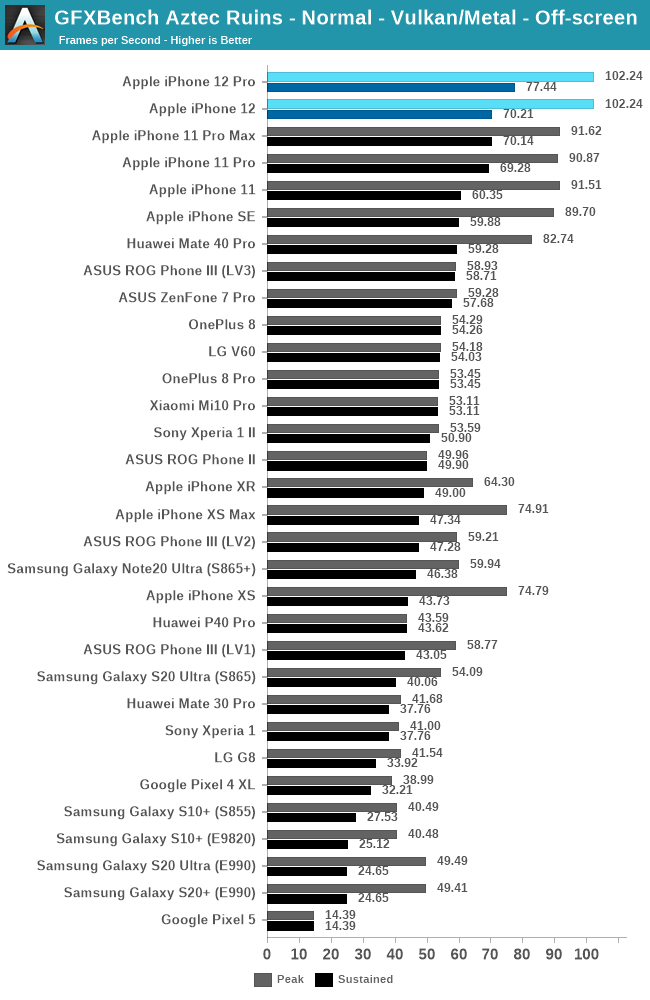 In the normal setting configuration of the Aztec test, we’re seeing again a 11% increase in sustained performance generationally, and a similar 12% boost in peak performance. These are good improvements but still a bit less than we had expected given the A14’s new process node and new GPU.

The power figures showcase a similar generational movement, with a slight performance increase at a slight power decrease. It’s good progression but again not quite fulfilling our expectations of a new process node bump. 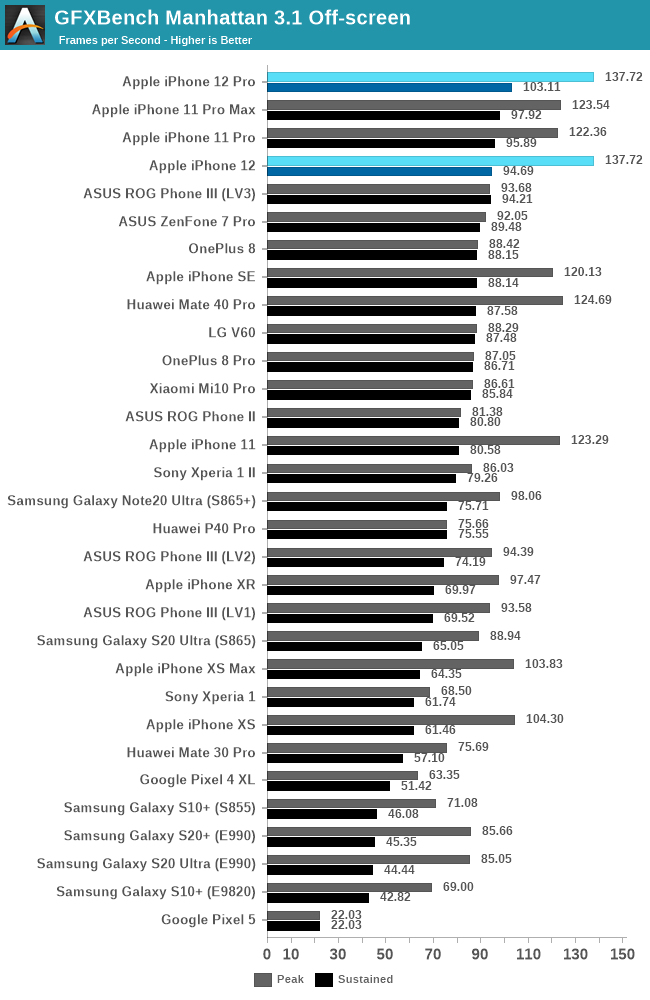 Depending on the workload, the generational performance increases can be even smaller, as here in Manhattan the performance increase in a throttled state is only 3% better for the new A14 based iPhone, with also a minor power decrease at this state. 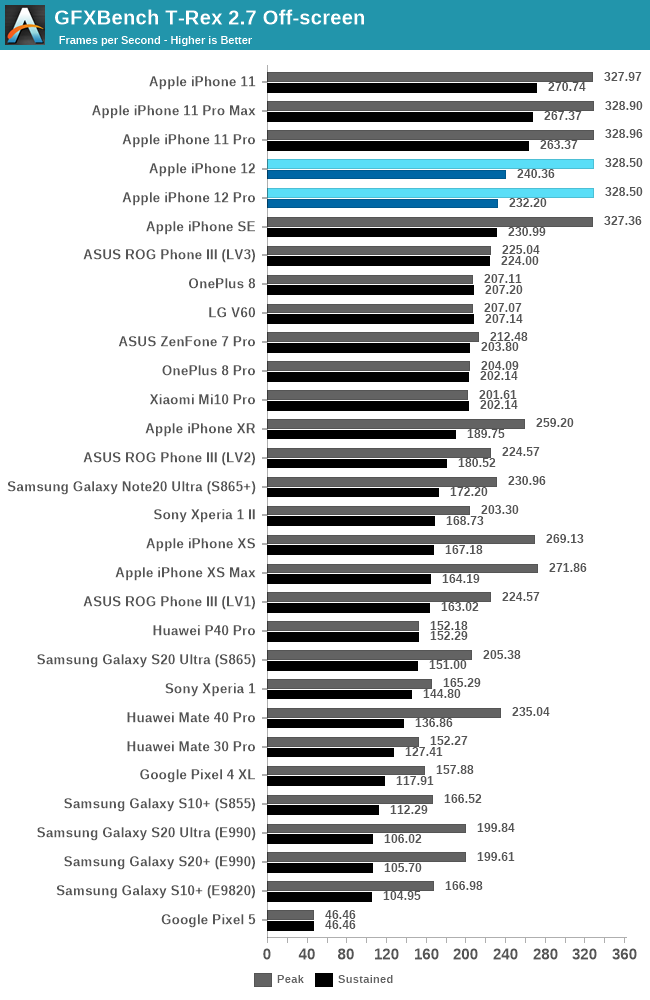 Generally speaking, our concerns over Apple’s lacklustre marketing on the GPU side of things seem to have been warranted as the new A14 and the 5nm process node doesn’t seem to bring substantial gains this generation. Performance is a little higher, and efficiency has also gone up as well, but it’s nowhere near the levels of improvements that Apple had been able to achieve with the A12 and A13. On one side that’s pretty understandable as those two generations had made huge leaps, and on the other hand it was maybe unreasonable to expect Apple to continue to make such gigantic strides on every generation.

Overall, the new iPhone 12 devices and the A14 still offer the very best gaming performance of any smartphone out in the market, showcasing significantly better experiences than any other Android competitor, but it’s also not a major noticeable upgrade over the iPhone 11 series devices.