For 2021, MSI has moved to Intel’s newest 11th generation Tiger Lake H-Series processors in the Raider lineup, which brings a lot of advantages over the 10th generation Comet Lake product. The new 10 nm processor features the newest Willow Cove cores which offer a lot of performance over the outgoing Skylake-based 14 nm generation. For the GE76 Raider, MSI offers up to the Core i9-11980HK processor which offers eight cores plus hyperthreading and a peak single-core boost frequency of 5.0 GHz. If you like to tweak your devices, MSI also offers overclocking on this model to get the maximum out of the device. 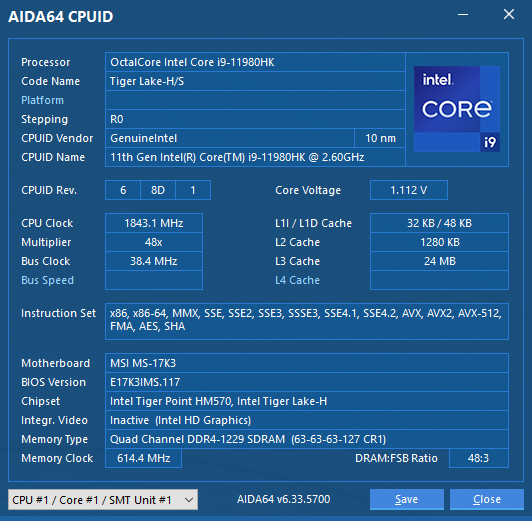 For a deeper dive into the new Tiger Lake-H platform, please refer to this Intel Reference Design system we tested back in May. When we tested it, the reference design arrived with basically no power limit set, which the reference design could not handle, so for the review, the TDP was set to 45-Watts as that is the “nominal” power level of the H-Series platform historically. TDP is important, as Intel does specify 35-Watt, 45-Watt, and 65-Watt levels for the 11th gen laptop platform, but the Core i9-11980HK offers both 45 and 65-Watt TDP ranges. If the platform can cool it, performance will be much better with a higher TDP since the system will not have to scale down the frequency as aggressively. Intel’s Reference Design laptop could not handle the 65-Watt base, but MSI's desktop replacement system here is designed to do that - later in the review we will go over the thermals in more detail, but perhaps without much surprise, MSI fares much, much better.

To see how the MSI GE76 Raider performs it was run through our standard laptop testing suite. If you would like to compare the results against any other system we have ever tested, please use our Online Bench tool. For those unaware, all tested laptops get sent back to the manufacturer post-review, so when we add new tests to the suite, older systems will not be included in the results since the test was not run.

For this review our comparisons will be other desktop replacement systems, including the AMD powered ASUS G513QY with Ryzen 9 5900HX, Intel’s Tiger Lake reference system, and a few older systems including the previous generation MSI GE75 Raider. 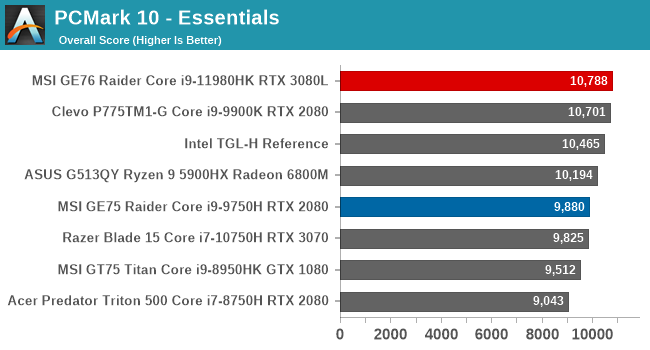 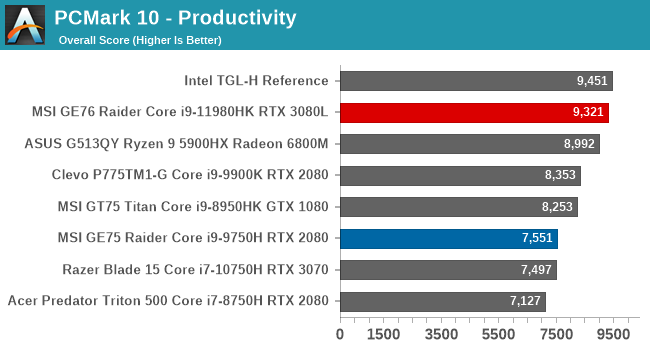 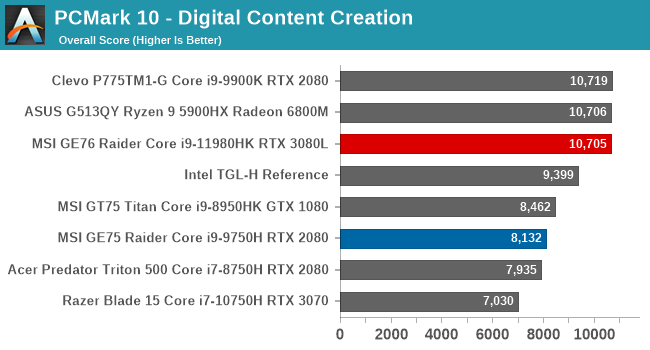 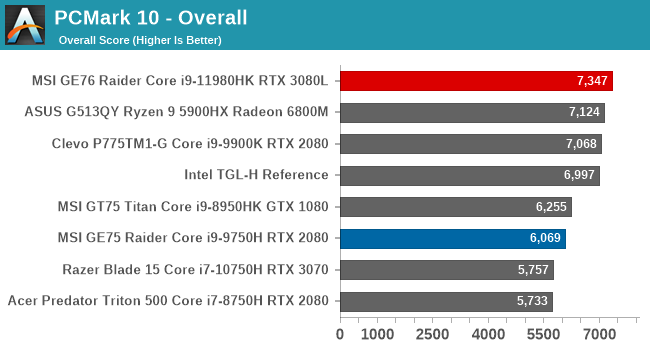 PCMark is a full-system benchmark which highlights CPU performance, but also includes the GPU, memory, and storage as factors in the outcome depending on the test being performed. With Intel’s fastest Tiger Lake processor coupled with the NVIDIA RTX 3080L, the MSI GE76 Raider is the fastest laptop we’ve tested in the overall PCMark 10 suite. Not a bad start. 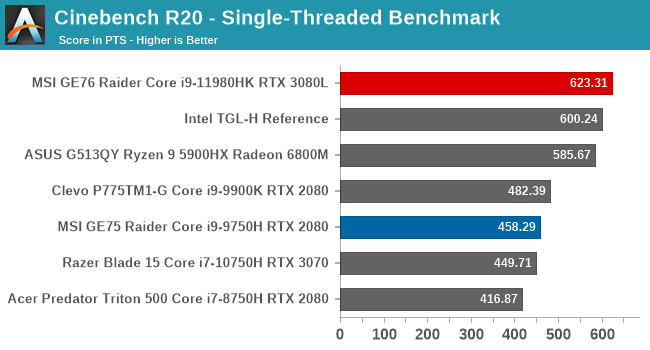 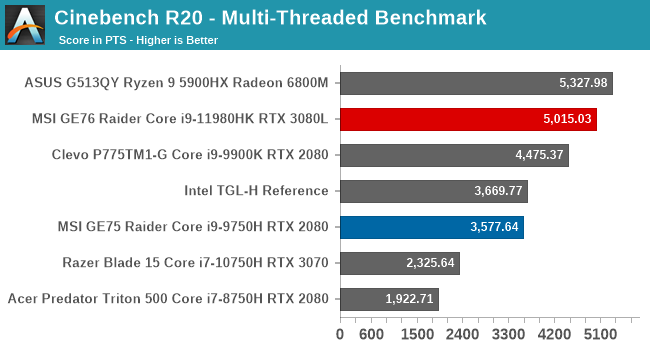 Intel’s Tiger Lake reference system proved that Intel once again holds the single-threaded performance crown, and with MSI running at the higher TDP range for the Core i9-11980HK, it pulls ahead even further. AMD still provides more multi-threaded performance thanks to more efficient cores.

If you need to transcode content, Handbrake allows the choice to use the software encoder for the best quality, or one of the hardware-based encoders for a quicker conversion. The AMD powered ASUS system edges the MSI in software slightly, but the RTX 3080L with its massive 165-Watt TDP in the MSI allows it to edge the other systems.

File compression and decompression is another common task, and it is very interesting how different the AMD and Intel platforms perform these tasks. AMD has a clear advantage in decompression, but Intel’s single-threaded performance advantage seems to give it the edge on the compression side. The MSI’s higher TDP for Tiger Lake provides it an advantage here.

Web performance is not just a CPU test, but also a browser test, since web performance is predicated on the underlying browser scripting engine. For all tests, we leverage Microsoft Edge, although any benchmark result is a point in time, since browsers are constantly updated which may impact the results. 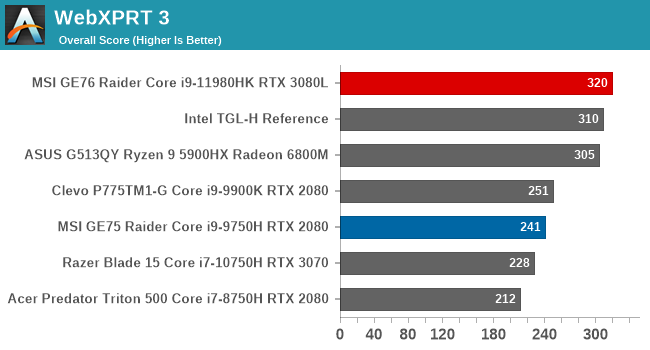 Intel’s Tiger Lake platform has upped the game for web performance again, and the MSI system is able to squeak past the Ryzen 9 5900HX in both WebXPRT and Speedometer. Single-threaded performance is still important, even with eight cores and sixteen threads available.

To test storage performance, we use the recently added storage tests for PCMark 10, which leverage real-world storage traces and provide a much more realistic result than just looking at peak speeds. A big advantage of Tiger Lake over the outgoing Comet Lake platform, as well as AMD’s Cezanne, is that Intel has added PCIe 4.0 storage support for this generation. MSI has outfitted review unit GE76 Raider with the Samsung PCIe 4 PM9A1 1 TB drive, although since drives are a commodity now, there is no guarantee that will be installed in all systems sold at retail.

The Samsung PCIe 4 drive is easily the quickest drive we’ve tested yet, with a fantastic average access time of just 70 microseconds, and an overall score of over 2300. If storage performance is key for your workflow, the MSI GE76 Raider will handily fill the bill.

Intel Has Two Generations of Bitcoin ASIC: BZM1 is Built on 7nm, 137 GigaHash/sec at 2.5 W AT Deals: ASUS ROG Zephyrus Gaming Laptop Down to $1300