More than 50% of the servers are bought to virtualize. Virtualization is thus the killer application and the most important benchmark available. VMware is by far the market leader with about 80% of the market. However, we encountered - once again - serious issues in getting ESX installed and running on the newest platform. ASUS told us we need the ESX Update 4, which we do not yet have in the labs. We are doing all we can to make sure that our long awaited hypervisor comparison will be online in April, so stay tuned. Since we have not been able to carry out our own virtualization benchmarking, we turn to VMware's VMmark.

VMware VMmark is a benchmark of consolidation. Several virtual machines performing different tasks are consolidated, creating a tile. A VMmark tile consists of:

The first three run on a Windows 2003 guest OS and the last three on SUSE SLES 10. 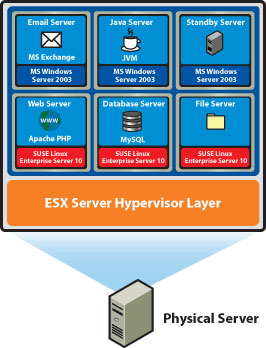 Let us first see how many tiles (six VMs per tile) each server can support: 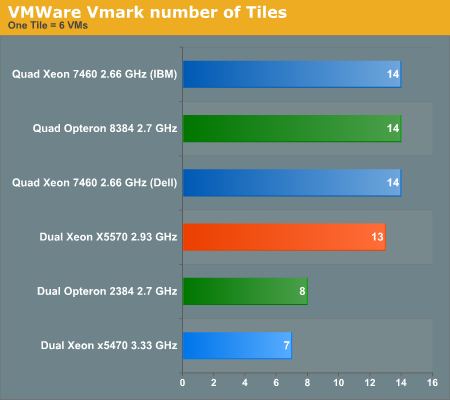 The newest Xeon is shattering records again: with 13 tiles (in 72GB) it can consolidate by far the most VMs in a dual socket server. It is already dangerously close to the quad socket servers with up to 128GB of RAM. It is important to note that once you use more than one DIMM per channel, the maximum DDR3 speed is 1066. Once you fill up all slots (three DIMMs per channel, nine DIMMs per CPU), the DDR3 memory is running at 800MHz. Intel's official validation results can be found here.

Nevertheless, the performance impact of lower DDR3 speeds is not large enough to offset the advantage of three DIMMs per channel: up to 18 DIMMs in a dual configuration is a record. So far, AMD's latest Opteron held the record with eight DIMMs per CPU, or a maximum of 16 per dual socket server. AMD' supports up to three DIMMs per channel at 800MHz. Once you use four DIMMs (eight per CPU) per channel, the clock speed falls back to 533MHz. That is also a reason, besides pure performance, why Intel can support 13 tiles or 78 light VMs per server: Intel used 72GB of DDR3 at 800MHz. AMD is stuck at eight tiles for the moment: the dual Opteron servers get 64GB (at 533MHz) at the most. 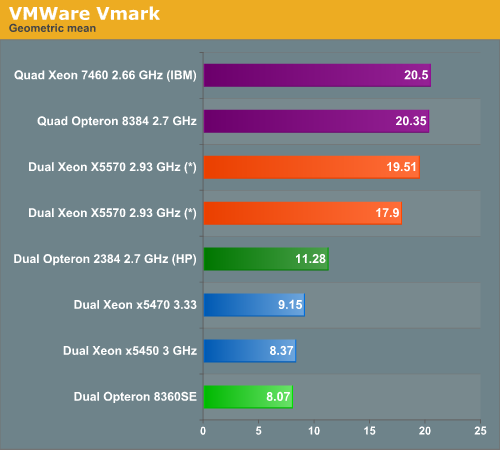 World switch times from VM to hypervisor have been reduced to 40% of those of Clovertown (Xeon 53xx), and EPT is good for a 27% performance increase. Add a massive amount of memory bandwidth, and we understand why the Nehalem EP shines in this benchmark. The scores for the Xeon X5570 are however preliminary: we have seen scores range from 17.9 to 19.51, but always with 13 tiles. The ESX version was not an official version ("VMware ESX Build 140815") which will probably morph into ESX 3.5 Update 4. AMD's results might also get a bit better with ESX 3.5 Update 4, so take the results with a grain of salt, but they give a good first idea. There is little doubt that the newest Xeon is also the champion in virtualization.

Both AMD and Intel emphasize that you can "vmotion" across several generations. AMD demonstrated that it is possible to migrate from the hex-core Istanbul to the quad-core Barcelona, while Intel demonstrated vmotion between "Harpertown" and "Nehalem".

It will be interesting to see how far you can go with this in practice. In theory you can go from Woodcrest to Nehalem. It is funny to see that Intel (and AMD to a lesser degree) have to clean up the mess they made with the incredibly chaotic ISA SIMD extensions: from MMX to more SSE extensions then we care to remember.