vApus Mark I: the choices we made

vApus mark I uses only Windows Guest OS VMs, but we are also preparing a mixed Linux and Windows scenario. vApus Mark I uses four VMs with four server applications:

We took great care to make sure that the benchmarks start, run under full load, and stop at the same moment. vApus is capable of breaking off a test when another is finished, or repeating a stress test until the others have finished. 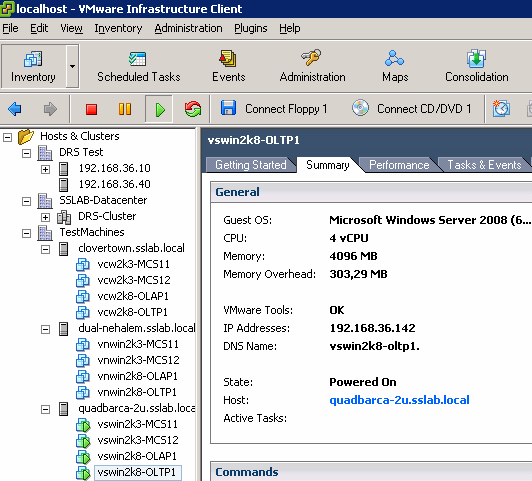 The OLAP VM is based on the Microsoft SQL Server database of the Flemish/Dutch Nieuws.be site, one of the newest web 2.0 websites launched in 2008. Nieuws.be uses a 64-bit SQL Server 2008 x64 database on top of Windows 2008 Enterprise RTM (64-bit). It is a typical OLAP database, with more than 100GB of data consisting of a few hundred separate tables. 99% of the load on the database consists of selects, and about 5% of these are stored procedures. Network traffic is 6.5MB/s average and 14MB/s peak, so our Gigabit connection still has a lot of headroom. DQL (Disk Queue Length) is at 2.0 in the first round of tests, but we only record the results of the subsequent rounds where the database is in a steady state. We measured a DQL close to 0 during these tests, so there is no tangible impact from the storage system. The database is warmed up with 50 to 150 users. The results are recorded while 250 to 700 users hit the database.

The MCS eFMS portal, a real-world facility management web application, has been discussed in detail here. It is a complex IIS, PHP, and FastCGI site running on top of Windows 2003 R2 32-bit. Note that these two VMs run in a 32-bit guest OS, which impacts the VM monitor mode.

Since OLTP testing with our own flexible stress testing software is still in beta, our fourth VM uses a freely available test: "Calling Circle" of the Oracle Swingbench Suite. Swingbench is a free load generator designed by Dominic Giles to stress test an Oracle database. We tested the same way as we have tested before, with one difference: we use an OLTP database that is only 2.7GB large (instead of 9.5GB). We used a 9.5GB database to make sure that locking contention didn't kill scaling on systems with up to 16 logical CPUs. In this case, 2.7GB is enough as we deploy the database on a 4 vCPU VM. Keeping the database relatively small allows us to shrink the SGA size (Oracle buffer in RAM) to 3GB (normally it's 10GB) and the PGA size to 350MB (normally it's 1.6GB). Shrinking the database ensures that our VM is content with 4GB of RAM. Remember that we want to keep the amount of memory needed low so we can perform these tests without needing the most expensive RAM modules on the market. A calling circle test consists of 83% selects, 7% inserts, and 10% updates. The OLTP test runs on the Oracle 10g Release 2 (10.2) 64-bit on top of Windows 2008 Enterprise RTM (64-bit).

Below is a small table that gives you the "native" characteristics that matter for virtualization in each test. (Page management is still being researched.) With "native" we mean the characteristics measured running on the native OS (Windows 2003 and 2008 server) with perfmon.


Our OLAP database ("Nieuws.be") is clearly mostly CPU intensive and performs very little I/O besides a bit of network traffic. In contrast, the OLTP test causes an avalanche of interrupts. How much time an application spends in the native kernel gives a first rough indication of how much the hypervisor will have to work. It is not the only determining factor, as we have noticed that a lot of page activity is going on in the MCS eFMS application, which causes it to be even more "hypervisor intensive" than the OLTP VM. From the data we gathered, we suspect that the Nieuws.be VM will be mostly stressing the hypervisor by demanding "time slices" as the VM can absorb all the CPU power it gets. The same is true for the fourth "OLTP VM", but this one will also cause a lot of extra "world switches" (from the VM to hypervisor and back) due to the number of interrupts.

The two web portal VMs, which sometimes do not demand all available CPU power (4 cores per VM, 8 cores in total), will allow the hypervisor to make room for the other two VMs. However, the web portal (MCS eFMS) will give the hypervisor a lot of work if Hardware Assisted Paging (RVI, NPT, EPT) is not available. If EPT or RVI is available, the TLBs (Translation Lookaside Buffer) of the CPUs will be stressed quite a bit, and TLB misses will be costly.

As the SGA buffer is larger than the database, very little disk activity is measured. It helps of course that the storage system consist of two extremely fast X25-E SSDs. We only measure performance when all VMs are in a "steady" state; there is a warm up time of about 20 minutes before we actually start recording measurements.