The Nieuws.be site is sitting on top of a pretty large database - more than 100GB and growing. This database consists of a few hundred separate tables, which have been carefully optimized by our lab (the Sizing Servers Lab). We have described our testing methods previously in more detail. As some of readers suggested we upgraded from SQL Server 2005 SP3 to SQL Server 2008. 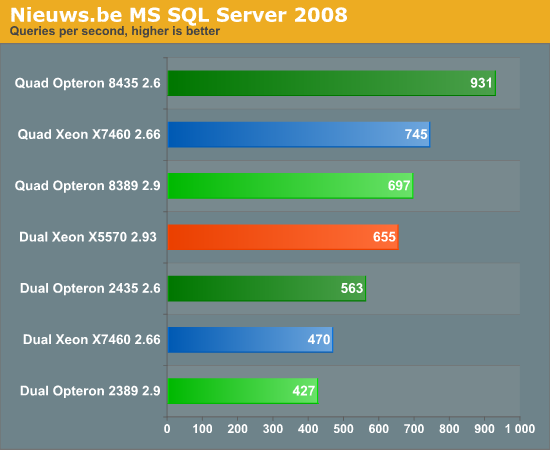 In our "hex-core Opteron" review, we noticed excellent scaling from the quad-core Opteron "Shanghai" to a hex-core Opteron "Istanbul". 50% more cores resulted in a 40% performance increase. Even with 24 cores, the scaling remains outstanding: as we add another 12 "Istanbul" cores (a 100% increase), we get 65% more queries per second at a response time of 1000 ms. The Quad Xeon X7460 has a small but noticeable lead over the powerful dual Xeon X5570. The Quad Opteron 8435 outperforms the latter by 42%, which is quite impressive. The Microsoft SQL server team also deserves a pat on the back: few "native" applications - even databases - scale well to 24 cores.