In and Around the Antec GX700

Antec's design for the GX700 is pretty much coming from the same place as Corsair's Vengeance C70; there's a military-inspired styling to it, and it takes the ostentatious gamer enclosure off in a new direction. Antec uses a baseline two-tone of black and olive green, spicing things up with red for some of the switches. There's also a yellow-black-striped decal for the cover over the fan controller. I'm not a fan and some of you won't be either, but my answer is going to be pretty much the same as it ever was: at $59, assuming the case comes through on performance, who cares? 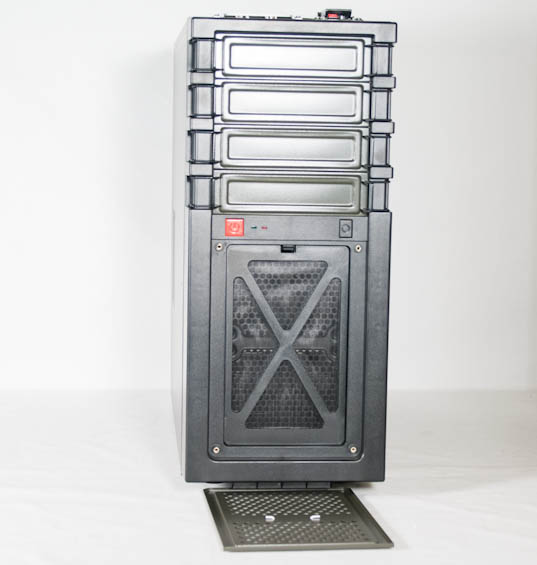 The front of the GX700 is something the rep was pretty proud of. Antec uses clamps to hold solid metal drive bay shields into place, opting for an "ammo case" motif. Beneath the four drive bays (technically three, but more on this later) are the red power button, a recessed black reset button, and a metal grate held into place with four thumbscrews that hides the bottom two fan mounts. The rest of the fascia is black plastic; the price had to come from somewhere.

When you move to the top, you can see the fan mounts are slightly extruded. I've seen a couple of cases (Rosewill's Armor Evolution, for one, which has a review due soon) that have taken a similar tack to the top cooling. It's not the most attractive solution, but it does make a feature out of the cooling system, and it actually adds a little bit of headroom for mounting radiators to the top of the case.

The rest of the body of the GX700 is black-painted SECC steel with a plastic flip cover for the expansion slots, and honestly, this is where they cut corners. The plastic and steel they've used for the GX700 is pretty chintzy, and the front fascia isn't held on particularly securely. I've assembled and moved dozens of cases, but when I went to move this one from my work area to testing, the front actually popped off and the case fell, damaging one of the feet and warping the rails for the fan filter so that it won't stay in place. Most users first instinct is going to be to grip from the front and the back, unfortunately. 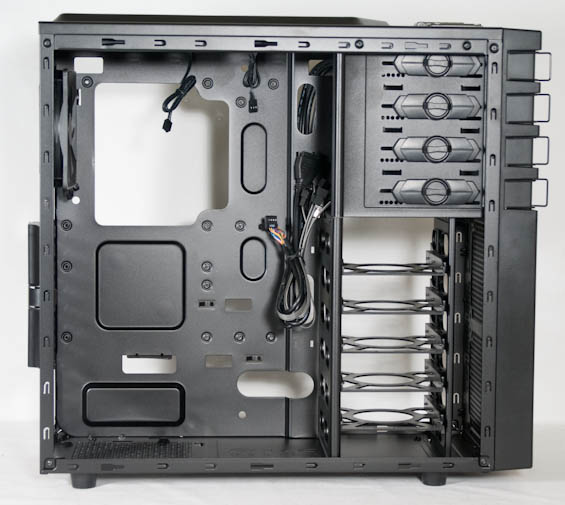 Thumbscrews hold the side panels into place, and they employ the same notched mounts we're accustomed to on these less expensive cases. When you do get inside the GX700, it's pretty business as usual. The five 2.5"/3.5" drive sleds all use trays, while the 5.25" bays enjoy snap-on clamps. There are cable routing holes throughout the motherboard tray, a healthy cut out for CPU backplates, and smartly, the tray itself is slightly recessed with a cabling channel to the right. This is a good way to cut down on case size while still offering a healthy amount of space for routing cables.

Honestly, the big deal with the GX700 is again that it includes a lot of features at a low price, but note that build quality is a little bit iffy. The steel is easy to dent, and the plastic used throughout the case isn't the greatest. What we have is a weird melange of building materials, none particularly great, but together they do help to hide just how cheaply built the case actually is. We're still not in the realm of a $30 bargain bin bleeder, though, which is good.