Intel left me to install and run anything I wanted to during a period of a few hours at their campus in Santa Clara. I got a feel for the speed and snappiness of Bay Trail during my benchmark setup/installation process. While I don't believe Clover Trail was really usable in Windows 8's desktop mode (it was just too slow), the same is definitely not true for Bay Trail. With the exception of a few benchmark installs or loads that simply took forever, my Bay Trail experience was really quite good under Windows. Bay Trail is obviously not as fast as Haswell when it comes to general usage, but it's definitely worthy of a discussion. Whether or not it actually is good enough for an entry level machine will depend on how OEMs choose to configure their Bay Trail systems. I'll hold off on a final verdict here until we have some time with final Bay Trail devices and not just FFRDs. 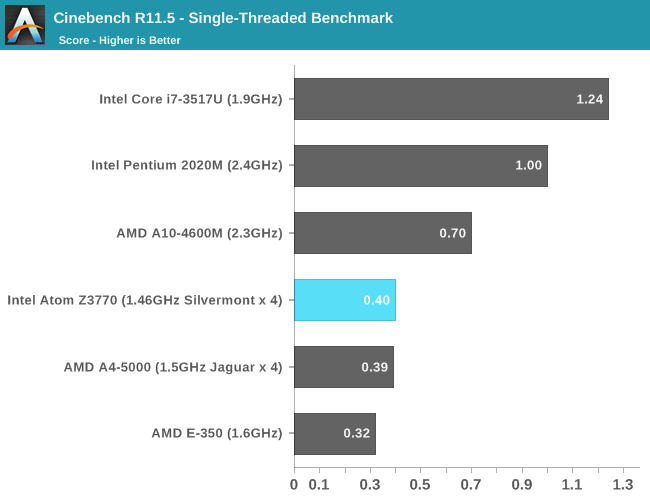 The single threaded performance numbers are just barely ahead of AMD's Jaguar based Kabini SoC. The big difference however is power. I had Intel measure SoC power at the board level while running a single threaded Cinebench 11.5 run on the Atom Z3770 and saw a range of 800mW - 1.2W. AMD on the other hand lists the A4-5000's SoC/APU idle power as 770mW. I don't have equivalent data for AMD, but with the A4-5000 idling at 770mW, it's safe to say that SoC level power consumption is lower on Bay Trail. The A10-4600M/Trinity comparison is interesting as it really helps put Bay Trail's performance in perspective as well. 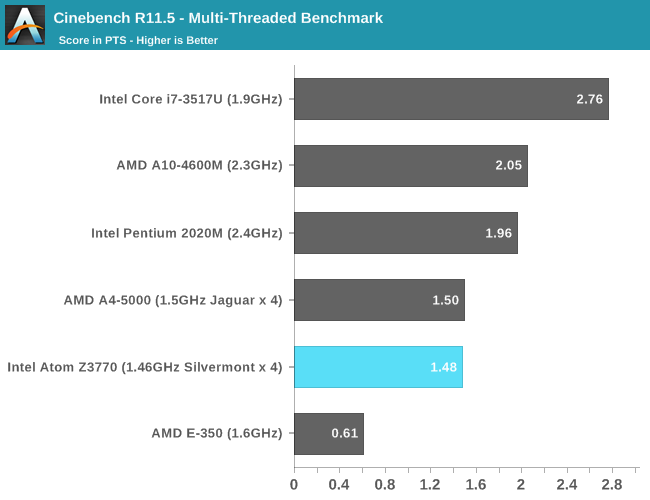 Multithreaded performance puts Bay Trail and AMD's Kabini at similar performance levels. Once again, looking at SoC power however the Atom Z3770 pulls around 2.5W in this test. Looking at the increase in platform power for the A4-5000 here, I'm assuming that the equivalent data for AMD would put Kabini in the 6W range. Multithreaded performance comes very close to the Pentium 2020M, but that's really overstating the strength of Bay Trail here as the Atom Z3770 has twice as many cores as the Pentium 2020M.

Single threaded integer performance is likely more useful to know, especially given Bay Trail's target market. For a rough idea of what to expect there, we turn to 7-Zip's built in benchmark. The dataset footprint is large enough to require main memory accesses, making this benchmark a little more interesting than it otherwise would've been. I unfortunately don't have access to all the CPUs here, so the 2C/4T 1.9GHz Core i7 3517U turns into a 2C/4T 1.7GHz Core i5 3317U as it's the only comparison data I had handy: 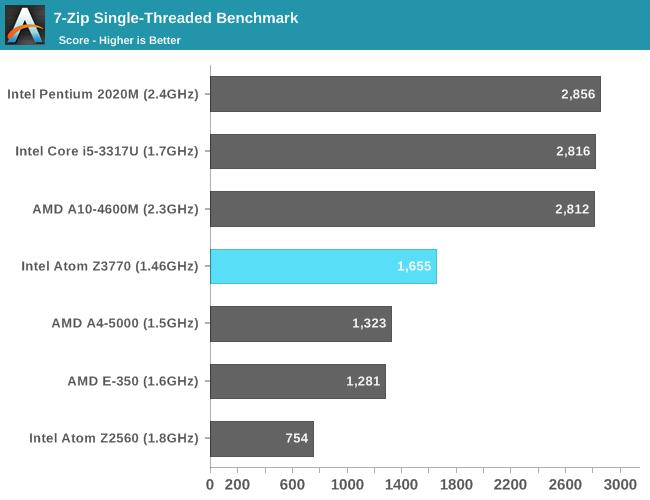 While Silvermont's single threaded FP performance seemed identical to Jaguar, its single threaded integer performance is much higher in the 7-Zip benchmark. Here the Atom Z3770 is 25% faster than the A4-5000. Looking further up the list however, there's still a healthy gap between thermally constrained Ivy Bridge Ultrabook class parts and the best Bay Trail has to offer. In this case Surface Pro's silicon is 70% faster than Bay Trail. Depending on your perspective that's either a huge difference or remarkably small given how wide the previous Atom to Core gap was.

7-Zip also features a multithreaded benchmark. Here we're looking at the same workload, but now split across all available cores/threads: 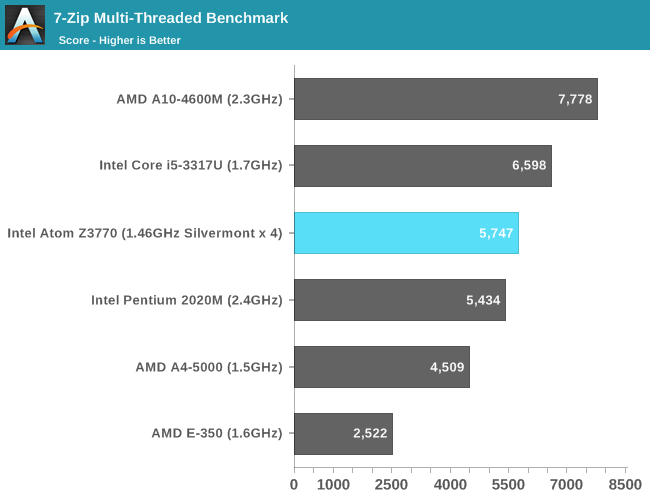 In multithreaded integer workloads, the Z3770 gets dangerously close to Ivy Bridge levels of performance. Again, we're overstating Bay Trail's performance here as the Z3770 has four cores while the Core i5-3317U only has two (but with Hyper Threading presenting another 2 virtual cores). I don't believe most tablet workloads are heavily threaded integer workloads, however the world is hardly single threaded anymore. The reality is that a quad-core Bay Trail should perform somewhere between 40% - 80% of a dual-core Ivy Bridge.

For what its worth, Bay Trail SoC power during the multithreaded 7-Zip benchmark was between 1.9W - 2.5W. At this point there's no question in my mind that Silvermont and Bay Trail are truly tablet-class power consumers.

Our next tests are browser based benchmarks that, once again, hope to characterize Bay Trail's performance in a manner that's more representative of lighter client workloads: 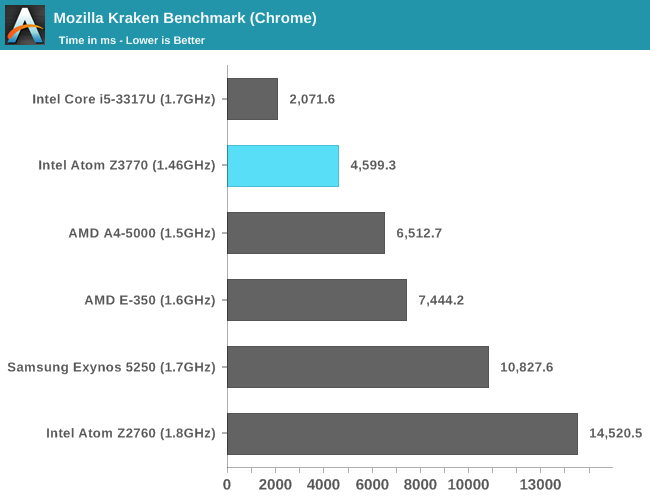 The Silvermont vs. Jaguar comparison shows a 29% advantage for Intel. Looking back at Clover Trail vs. Bay Trail, the performance improvement is staggering. Intel improved performance by over 3x at this point. The 17W Ivy Bridge vs. Bay Trail comparison continues to be interesting. Here the Core i5-3317U completes the Kraken test in half the time of the Atom Z3770. 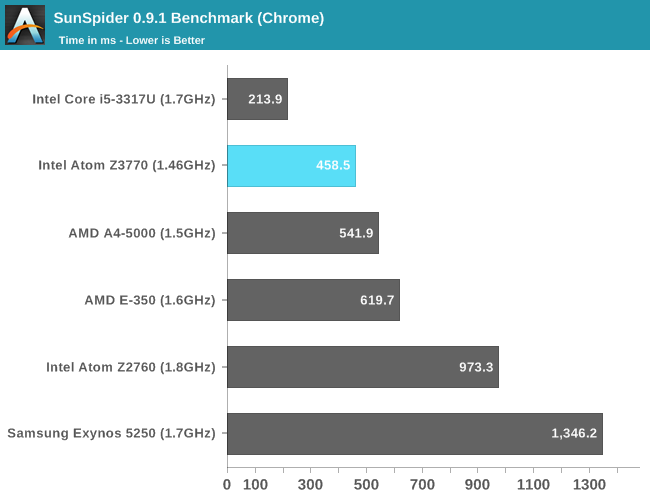 The Silvermont/Jaguar gap in SunSpider shrinks a bit in SunSpider. Bay Trail is still over 2x faster than Clover Trail, and Ivy Bridge remains over 2x the speed of Bay Trail.

For our final light CPU workload test we have PCMark 7. This is an interesting benchmark as it takes into account the storage subsystem a bit. Keep in mind here that the Bay Trail system is using eMMC based storage, while all of the others are using a standard SSD (Samsung SSD 830): 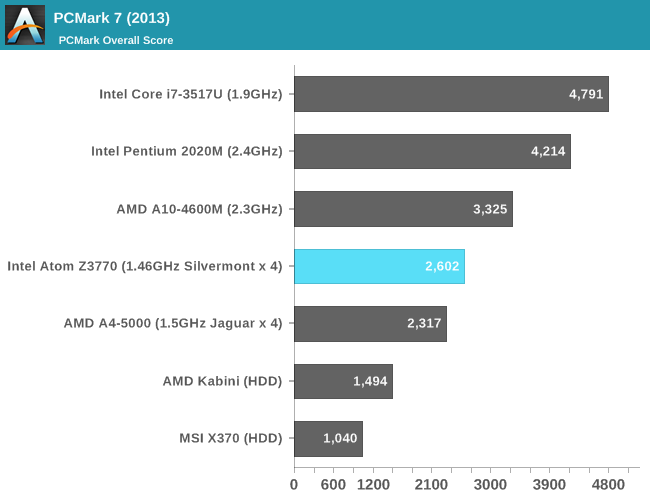 As we saw earlier, Bay Trail can make up for its single threaded performance by doing quite well in multithreaded tests. PCMark 7 attempts to present a mixed workload view of Bay Trail's performance and the result is relatively similar to AMD's Jaguar based A4-5000 Kabini APU. AMD's Trinity ends up being just under 30% faster than Bay Trail, while 17W Ivy Bridge is 60% faster. Overall platform performance is definitely not bad at all as long as the OEM does a good job specing the device. In this case the Samsung eMMC solution in the Bay Trail tablet reference design was surprisingly decent.

Arguably the more interesting CPU and GPU tests will come in the Android section but I borrowed some Android data from our Kabini review and ran through 3DMark, GFXBench 2.7 and some lighter Steam games: 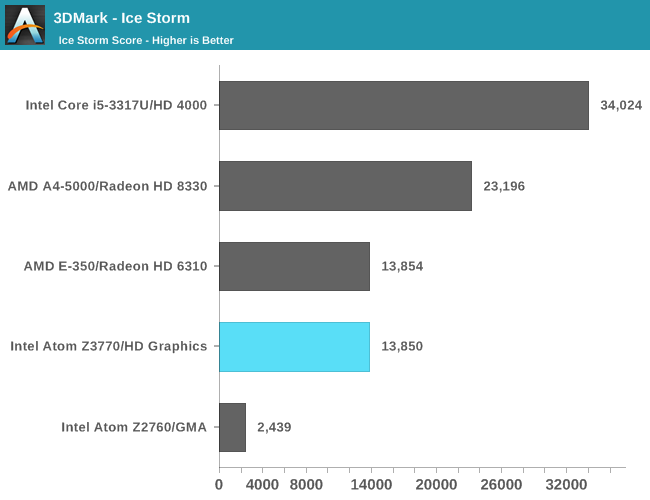 Bay Trail's overall 3DMark Ice Storm score (720p) is about on par with Brazos rather than being a competitor for Kabini. Bay Trail's HD Graphics core is based on Ivy Bridge and it's a cut down implementation at that. 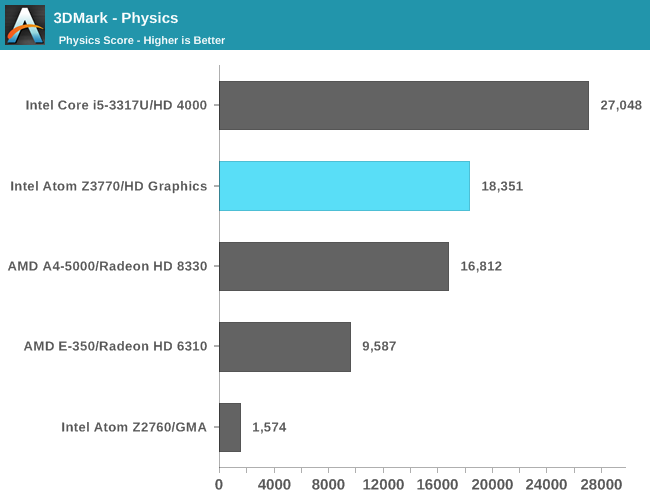 3DMark's Physics test is basically a multithreaded CPU benchmark, which allows the Z3770 to pull ahead of the A4-5000. 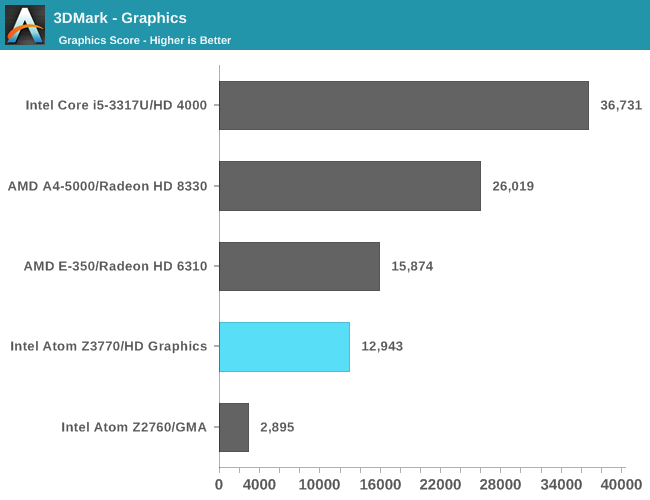 If we isolate graphics alone however, the Z3770 once again falls behind Brazos.

GFXBench 2.7's T-Rex HD test seems to agree with what 3DMark tells us: 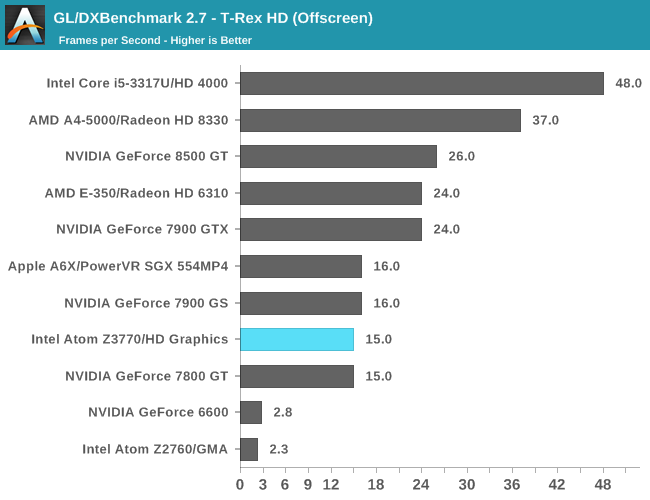 Obviously under Windows we have more opportunities to benchmark actual game performance. I turned to the lighter (1366 x 768, low quality) game benchmarks I ran for our HD 5000 comparison. I had to exclude Super Street Fighter IV as a driver problem kept it from running on the Bay Trail FFRD.

In a couple of cases Bay Trail delivers roughly half the GPU performance of a 2011 11-inch MacBook Air, but in a much lower power package. Minecraft saw a bigger gap at 1/3 the performance. None of these games are really playable, but that doesn't mean others aren't. I was able to play Team Fortress 2 on Intel's Bay Trail FFRD (with a Bluetooth keyboard and mouse of course) at reasonable frame rates. The system would chunk occasionally but for the most part it was relatively quick. Obviously Bay Trail's graphics are better suited for lighter tablet games. 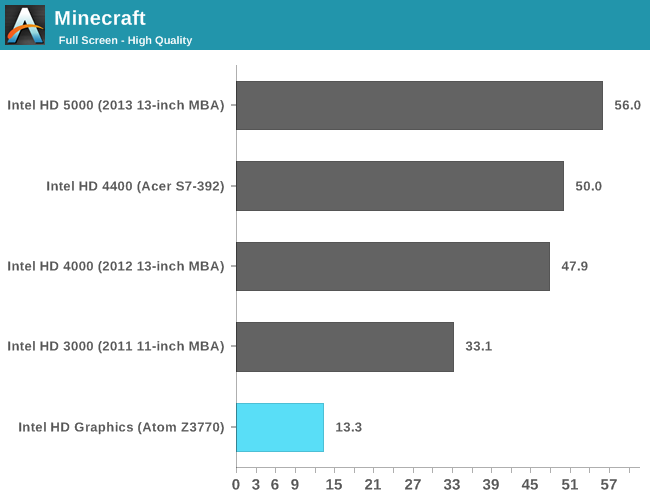 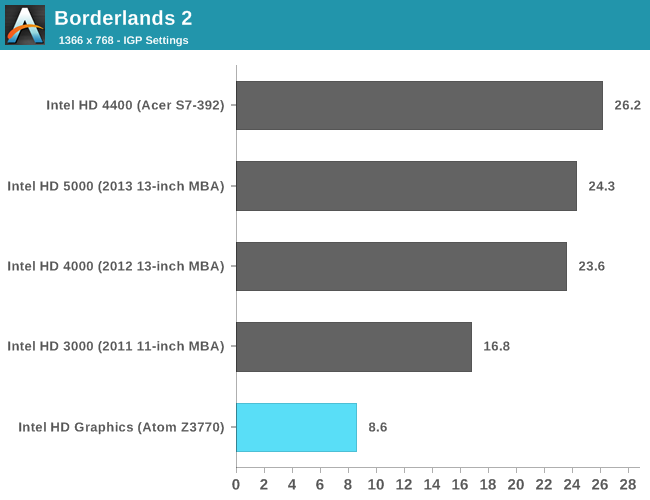 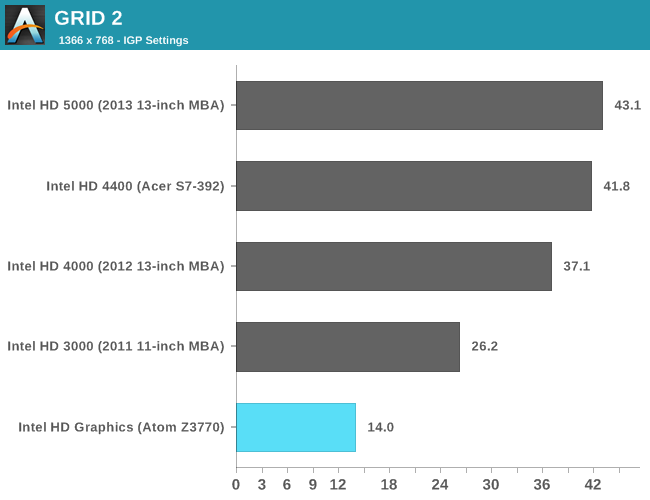