The ASRock X99E-ITX/ac Review: Up to 36 Threads in Mini-ITX

The software package from ASRock has gone through a slow evolution since Z77 into a single interface for all of ASRock’s functionality called A-Tuning. With the overclocking and gaming models the interface is slightly adjusted, but the green tint follows the majority of ASRock’s motherboard range. However the newest element to ASRock’s like is the APP Shop. This is essentially ASRock’s curated version of the Play Store/Microsoft Store, with only software ASRock feels is suited to their motherboard range. 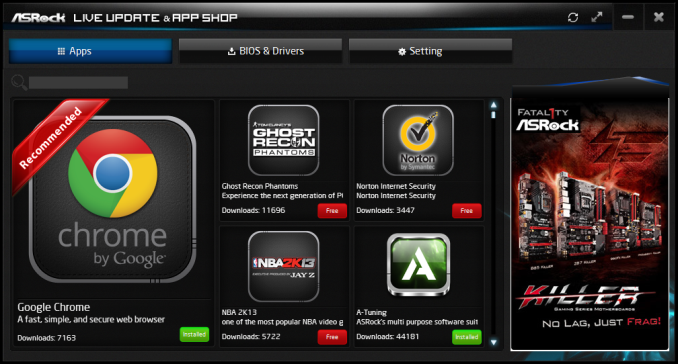 Currently the software is fairly limited to Chrome, ASRock’s own software programs and a few free-to-play titles with some demos. While offering this method to obtain software is interesting, it does open up a lot of questions. Will there be to-pay titles? What happens if one element of the store is filled with malware?

The APP Shop also offers a BIOS and Drivers section to update the system, but as of yet we have not had it working properly in our testing. 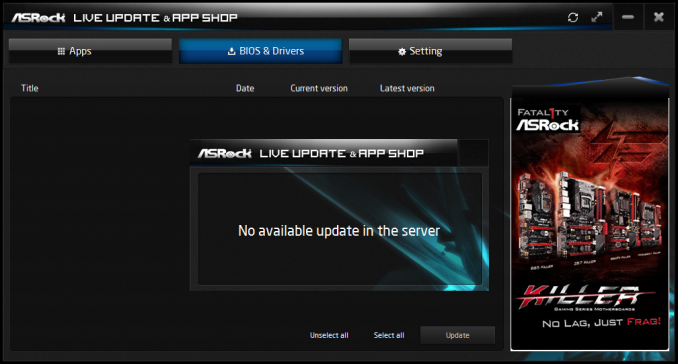 One suggestion has been that this software will only update the packages it downloads. There is another update tool in A-Tuning. 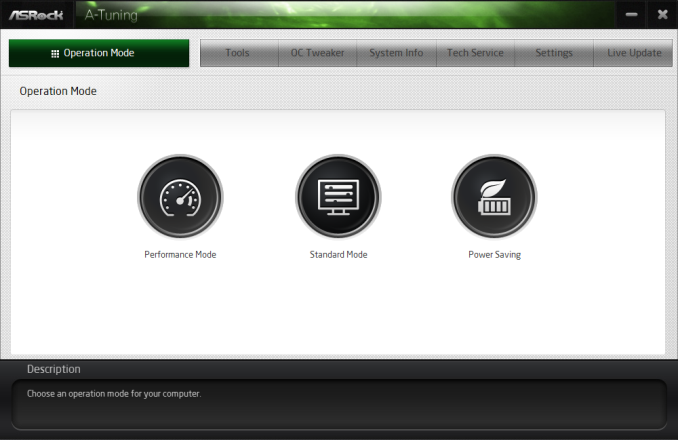 Power Saving puts the CPU into a low power mode (1.2 GHz on the 5960X) and requires the system have full CPU load before slowly ramping up the speed over the next 6-10 seconds. This keeps power consumption down, but perhaps increases the responsiveness of the system by not having that initial high single core frequency. Standard mode is the default setting, and Performance mode puts the CPU into high frequency mode for any loading. Performance Mode also opens up the Advanced menu: 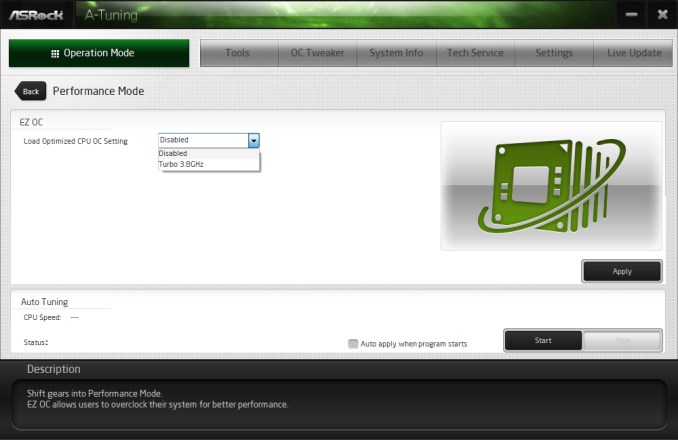 Here we have a list of Optimized CPU OC Settings similar to the BIOS and an auto tuning section. There is no list of auto tuning options similar to ASUS, for adjusting the stress tests or the optimum CPU temperature, although I would imagine that all the manufacturers might move in that direction at some point in the future. 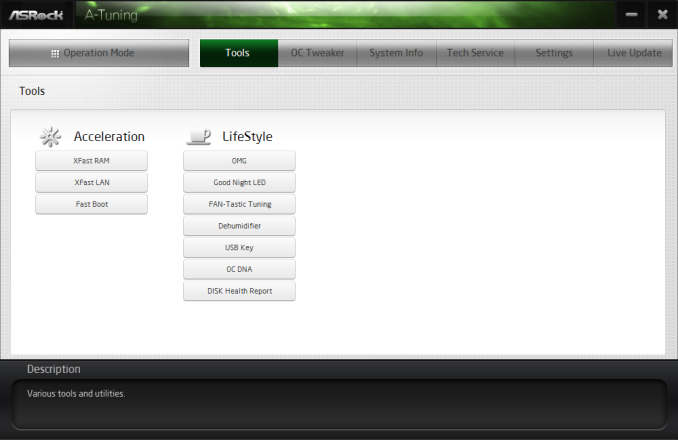 The tools menu has a lot of space for ASRock to add in future features, but currently houses the ones they do have. XFast RAM allows the system to partition some of the RAM into a RAMDisk while also providing some RAMCache options: 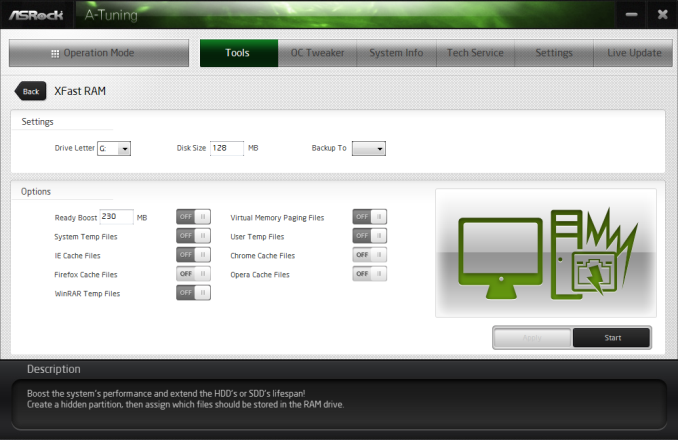 XFast LAN is a customized interface for cFos, allowing users to prioritize certain applications over others: 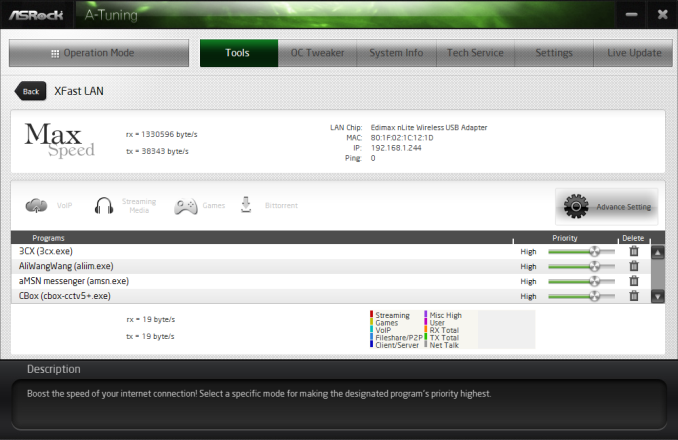 Personally I find this interface extremely cumbersome, especially if there are a lot of applications to deal with. ASRock could design something with less white space and a more efficient amalgamation of the A-Tuning visual dimensions to make the process a lot easier. There is access to cFos directly with the Advance Setting button: 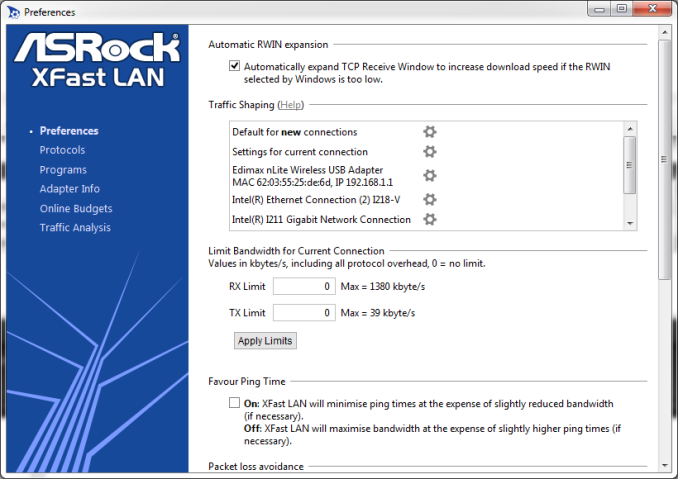 The software works with all the network ports on board. 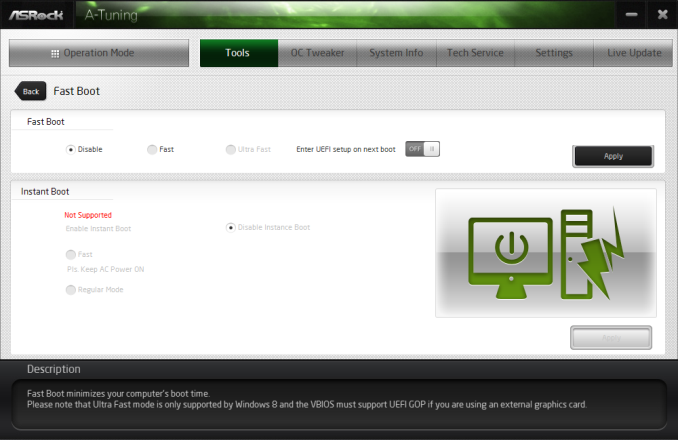 The Online Management Guard (OMG [!]) has been around for several generations of ASRock motherboards now, and offers the user the ability to disable the networking ports during certain times of the day. 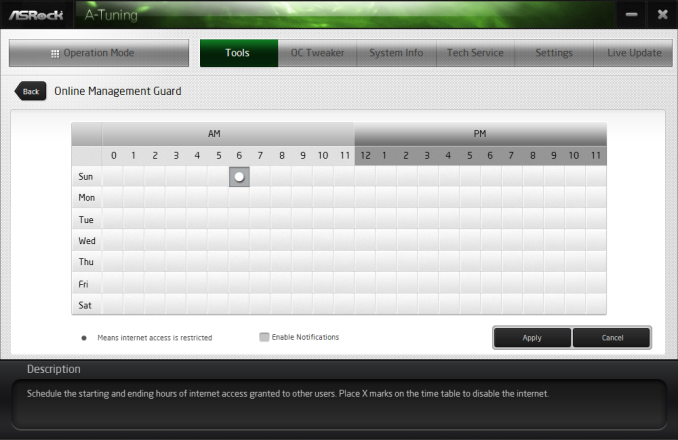 ASRock’s Fan software in the software now mirrors that in the BIOS, giving a better sense for the user in what to adjust: 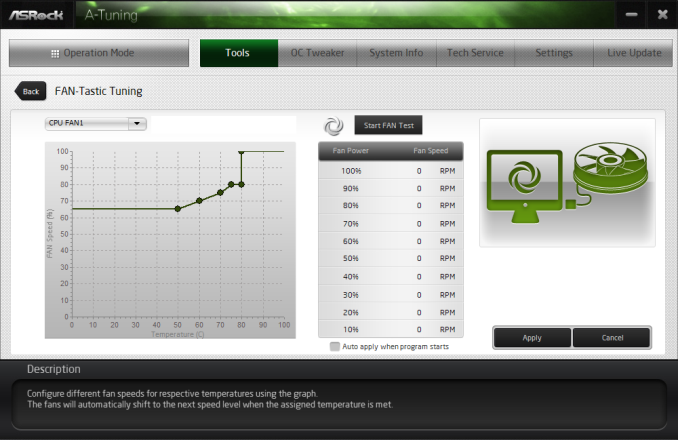 The FAN Test will detect the RPM for a given fan power, although the graph on the left is misnamed – what ASRock calls ‘FAN Speed (%)’ is actually deceptive because it means ‘Fan Power’ and the user has to do the mathematics in their head to adjust based on the table in the middle. If ASRock was on the ball, they would do the conversion in software and adjust the graph to read ‘Fan Speed (RPM)’ and adjust the axis appropriately from lowest Fan Speed to highest Fan Speed. 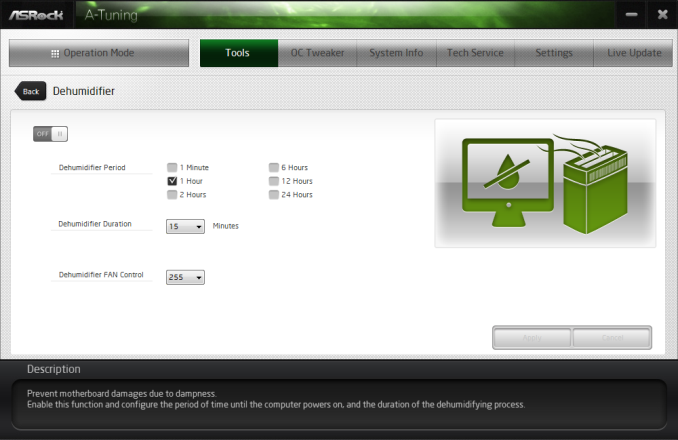 The Dehumidifier tool in the software is identical to that in the BIOS, allowing the system to enable the fans after the system has been shut off in order to equalize the air temperature inside and outside the case. This has benefits in humid environments where the moisture in the air may condense inside the case during a cool night after a hot day. 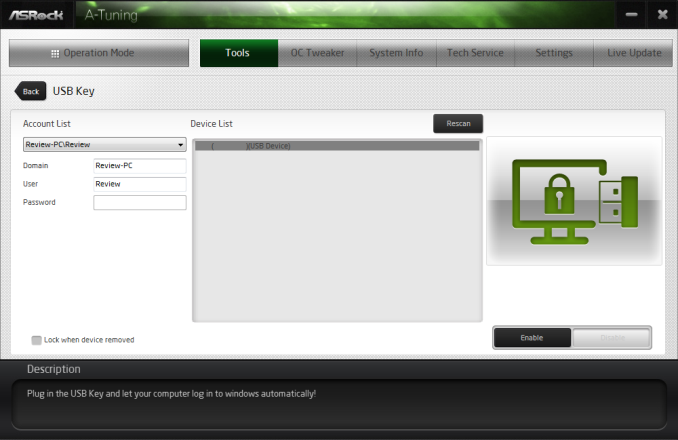 The USB Key tool allows users to assign a particular USB drive with login data for particular Windows users. This means that users need not remember a particular long password to log in, and only specified users are allowed to log in. Though lose the USB drive and lose the ability to log in. 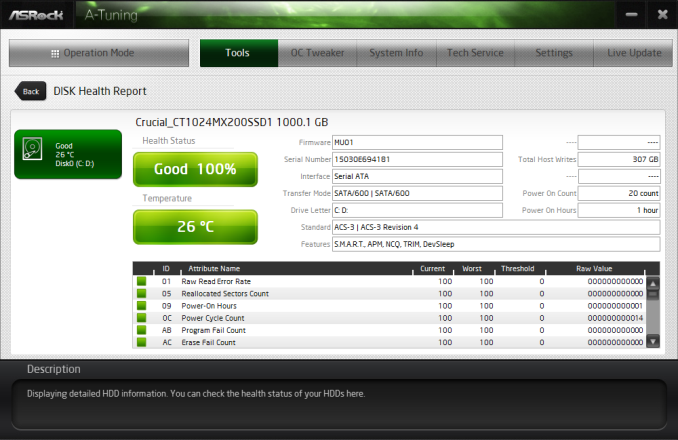 One of the newer tools in ASRock’s list is the DISK Health Report. This gives the critical information on the drives attached to the system, allowing SSD users to see the life of their drive. This drive is very new for my motherboard test beds, as represented by only a few hours in actual operation. 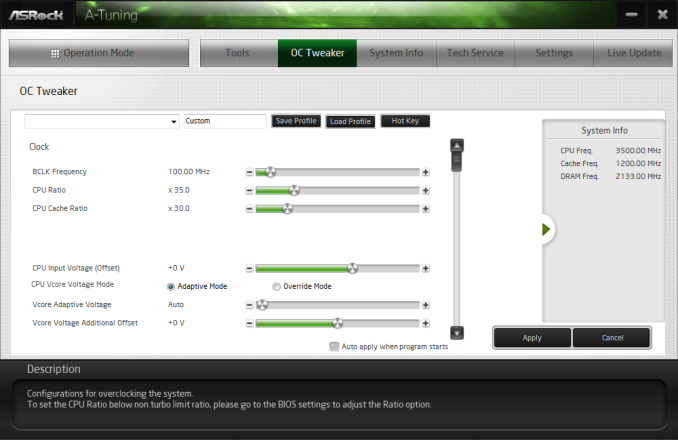 The next tab along the top is the OC Tweaker, featuring the more critical options from the BIOS for manual overclocking along with some options to save overclock profiles. The way this is shown in ASRock’s software is quite user-unfriendly, and I would suggest that the next iteration of the software gives an experienced user an easier way to adjust frequencies and voltages without dealing with sliding bars and scrolling. 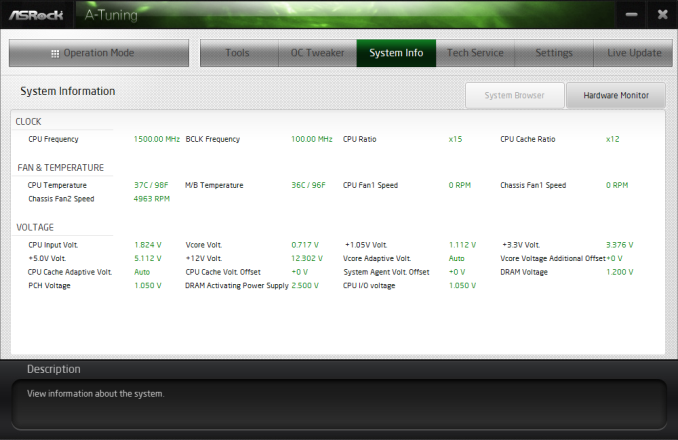 The System Info tab gives the hardware monitor page by default, giving information about the frequencies, fan speeds and voltages in the system. Most other manufacturers have a way of recording this data, or seeing it plotted on a graph while running a stress test, but ASRock is behind on this front at this time. 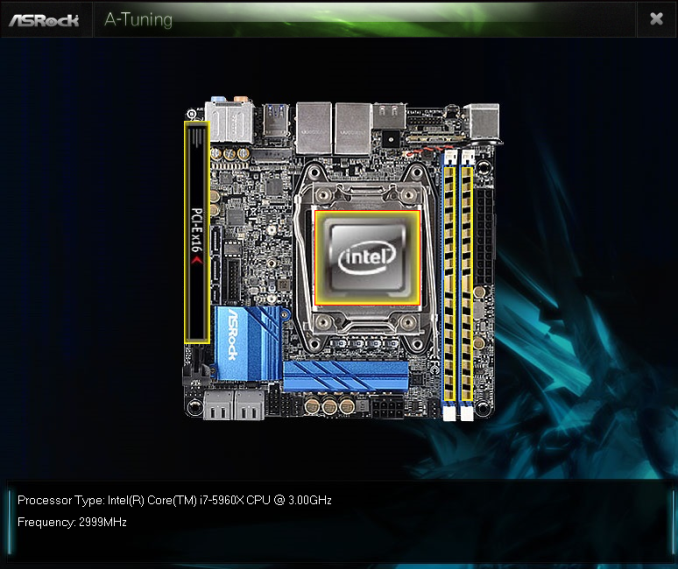 The Hardware Monitor section of System Info is identical to that in the BIOS, showing where hardware is installed with a mouse over giving basic details. This is handy for investigating which memory stick, USB or PCIe device is not being detected.

The Live Update tab is, by comparison to MSI, limited. Although I knew there were updates to the platform when I run this software, it failed to find the updated drivers. Here it also does not say how big each download is. If a user is on a limited or slow bandwidth package having to download 300MB of audio or graphics drivers can be detrimental.

While ASRock’s software package is presented in a good way, and there are a number of helpful tools, there are various aspects here that miss the mark in terms of user experience.