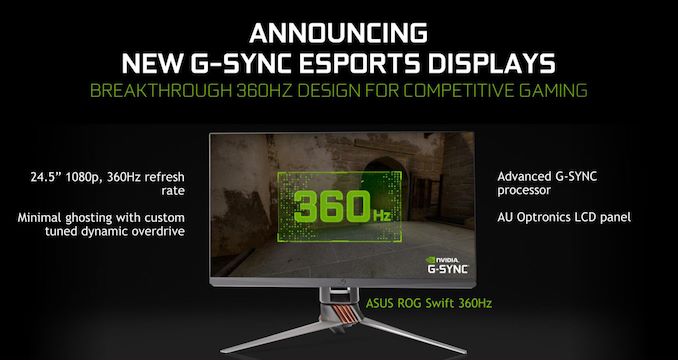 Even though CES proper doesn’t kick off for one more day, NVIDIA and ASUS are getting in an announcement a bit ahead of the curve relating to a new monitor. The two companies have been working on a new high-performance 1080p display aimed at competitive gaming that offers a blistering 360Hz maximum refresh rate,  50% faster than the current crop of 240Hz market leaders. The new monitor will be sold by ASUS as the ROG Swift 360, and is set to be available later this year.

Like other G-Sync projects, NVIDIA’s latest display endeavor looks to be an effort for the company to differentiate itself and its technology in a crowded market, this time by offering an LCD monitor with a rather absurd refresh rate.

The ROG Swift 360 itself is based on a 24.5-inch panel being supplied by AU Optronics, and which is capable of running at up to 360Hz. This is 120Hz faster than the current generation of high-end gaming monitors, which top out at 240Hz, and is an uncommonly large jump to make in a single generation. Unfortunately NVIDIA isn’t disclosing what type of panel is being used here, however all of the 24.5-inch 240Hz G-Sync monitors that have been released to date have been TN, so that’s a safe bet, especially with the kind of refresh rate NVIDIA and ASUS are looking to hit. The bigger question is whether this is a new panel from AUO, or if it’s a further overclocked version of their popular M250HTN01 panel.

NVIDIA and ASUS have not released much else with regards to technical details at this time. The monitor isn’t set to ship until later this year – which as we’re at the very start of the year, likely means it’s still several months off – so the companies undoubtedly still have some technical details to hammer out. Though as most of the work is in the panel and controller, it shouldn’t be too different from ASUS’s 240Hz ROG Swift PG258Q. 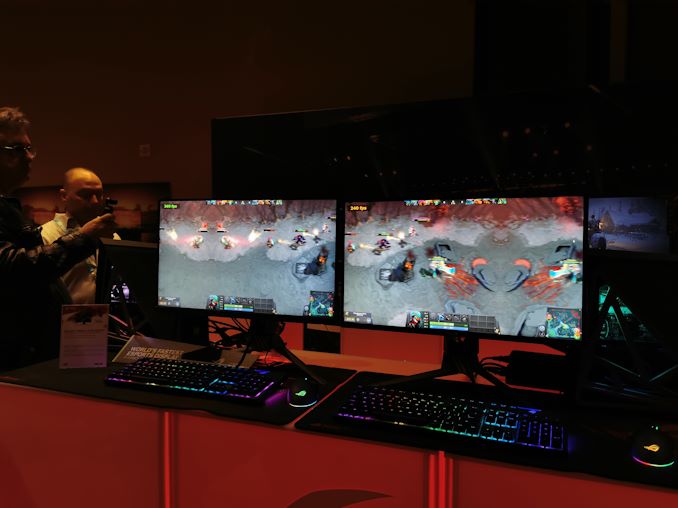 One thing that NVIDIA has confirmed, however, is that this will be a true G-Sync monitor, with NVIDIA supplying the monitor’s display controller. This is an important distinction not only for compatibility purposes, but because it means that the monitor supports full variable overdrive functionality, which will become increasingly important with such a wide refresh rate range. Even fast TN monitors still need to overdrive their pixels to hit high refresh rates, so the overdrive logic is practically as important as the panel itself in order to minimize ghosting. Though it goes without saying that with NVIDIA aiming to beat current generation monitors by 50%, it’ll be interesting to see just how well 360Hz works in practice, and if the monitor really is fast enough to make a 360Hz refresh rate useful.

The target market for the ROG Swift 360, in turn, is competitive gaming, as well as anyone who wants a competition-grade monitor. The benefits of higher refresh rates are pretty well known at this point – higher refresh rates make for smoother experiences and reduce rendering latency – and NVIDIA thinks that there’s still enough benefit to justify a 360Hz monitor. That said, with 240Hz monitors offering an already tiny 4.16ms frame time, the absolute benefit of 360Hz is small: that 50% jump in refresh rate only shaves off a further ~1.4ms at the monitor level (for a total of 2.77ms), which isn’t nearly as great as the jump from 60Hz to 120Hz, for example. 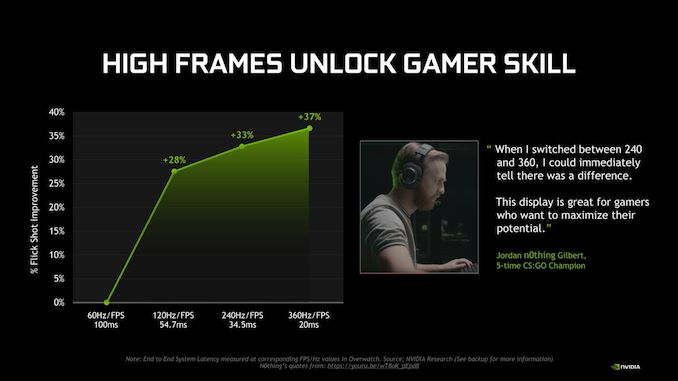 Still, NVIDIA has done their own research around the new monitor and player performance, finding that even with the diminishing returns, a 360Hz monitor did improve flick shot performance in Overwatch. As well, they measured a 14.5ms reduction in total (end-to-end) latency, going from 34.5ms at 240Hz to 20ms at 360Hz.

NVIDIA and ASUS will have the ROG Swift 360 on display this week at CES. So while the monitor won’t be on sale for a while yet, we should be able to get a first-hand look at how well NVIDIA’s future gaming monitor is set to perform.