Modern high performance processors implement a feature called Turbo. This allows, usually for a limited time, a processor to go beyond its rated frequency. Exactly how far the processor goes depends on a few factors, such as the Turbo Power Limit (PL2), whether the peak frequency is hard coded, the thermals, and the power delivery. Turbo can sometimes be very aggressive, allowing power values 2.5x above the rated TDP.

AMD and Intel have different definitions for TDP, but are broadly speaking applied the same. The difference comes to turbo modes, turbo limits, turbo budgets, and how the processors manage that power balance. These topics are 10000-12000 word articles in their own right, and we’ve got a few articles worth reading on the topic.

In simple terms, processor manufacturers only ever guarantee two values which are tied together - when all cores are running at base frequency, the processor should be running at or below the TDP rating. All turbo modes and power modes above that are not covered by warranty. Intel kind of screwed this up with the Tiger Lake launch in September 2020, by refusing to define a TDP rating for its new processors, instead going for a range. Obfuscation like this is a frustrating endeavor for press and end-users alike.

However, for our tests in this review, we measure the power consumption of the processor in a variety of different scenarios. These include full AVX2/AVX512 (delete as applicable) workflows, real-world image-model construction, and others as appropriate. These tests are done as comparative models. We also note the peak power recorded in any of our tests.

First up is our image-model construction workload, using our Agisoft Photoscan benchmark. This test has a number of different areas that involve single thread, multi-thread, or memory limited algorithms. 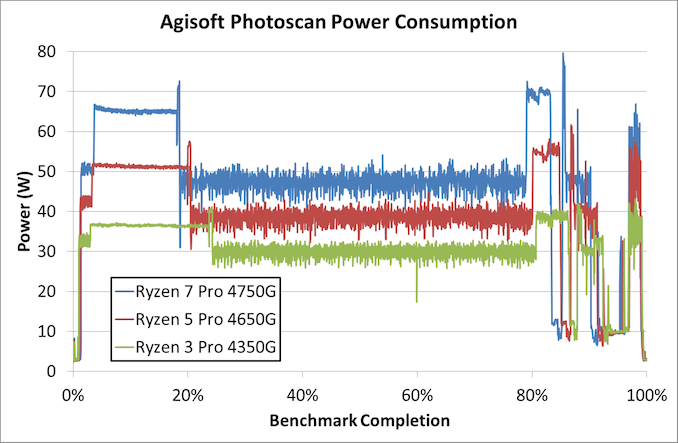 Each of our three processors here seems to approach different steady state power levels for the different areas of the benchmark.

The fact that the difference between each of the processors is 14-15 W in the first stage would go a little to suggesting that we're consuming ~7 W per core in this part of the test, which is strictly multi-threaded. However when it moves more into variable threaded loading, all three CPUs are well below the TDP levels.

The second test is from y-Cruncher, which is our AVX2/AVX512 workload. This also has some memory requirements, which can lead to periodic cycling with systems that have lower memory bandwidth per core options. 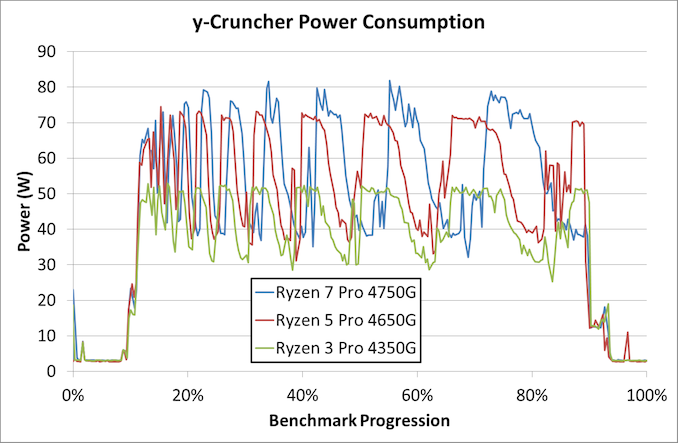 The y-Cruncher test is a little different, as we're mostly concerned about peaks. All three CPUs have a TDP rating of 65 W, however the 8-core here breaches 80 W, the 6-core is around 72 W, and the only processor below that TDP value is the quad core Ryzen 3.

For absolute peak power across all of our tests: 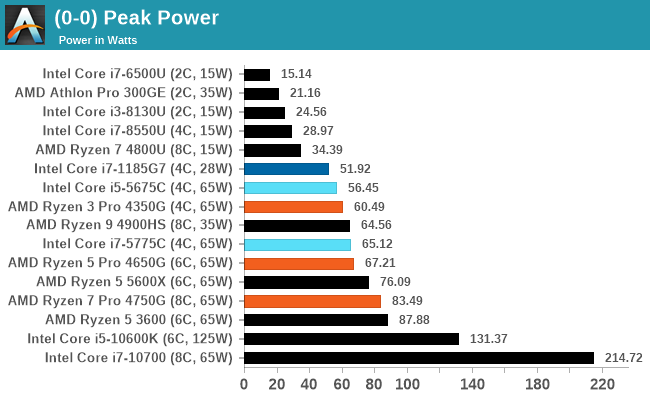 For absolute instanteous peak power, each of the Ryzen R4000 APUs does what was expected - with the Ryzen 7 hitting the socket limit for 65 W processors.