The Intel Core i9-12900KS Review: The Best of Intel's Alder Lake, and the Hottest

As far as top-tier CPU SKUs go, Intel's Core i9-12900KS processor sits in noticeably sharp In contrast to the launch of AMD's Ryzen 7 5800X3D processor with 96 MB of 3D V-Cache. Whereas AMD's over-the-top chip was positioned as the world's fastest gaming processor, for their fastest chip, Intel has kept their focus on trying to beat the competition across the board and across every workload.

As the final 12th Generation Core (Alder Lake) desktop offering from Intel, the Core i9-12900KS is unambiguously designed to be the powerful one. It's a "special edition" processor, meaning that it's low-volume, high-priced chip aimed at customers who need or want the fastest thing possible, damn the price or the power consumption.

It's a strategy that Intel has employed a couple of times now – most notably with the Coffee Lake-generation i9-9900KS – and which has been relatively successful for Intel. And to be sure, the market for such a top-end chip is rather small, but the overall mindshare impact of having the fastest chip on the market is huge. So, with Intel looking to put some distance between itself and AMD's successful Ryzen 5000 family of chips, Intel has put together what is meant to be the final (and fastest) word in Alder Lake CPU performance, shipping a chip with peak (turbo) clockspeeds ramped up to 5.5GHz for its all-important performance cores.

For today's review we're putting Alder Lake's fastest to the test, both against Intel's other chips and AMD's flagships. Does this clockspeed-boosted 12900K stand out from the crowd? And are the tradeoffs involved in hitting 5.5GHz worth it for what Intel is positioning as the fastest processor in the world? Let's find out.

Below is a list of our detailed Intel Alder Lake and Z690 coverage:

As a quick recap, we've covered Alder Lake's dual architectural hybrid design in our Core i9-12900K review, including the differences between the P (performance) and E (efficiency cores). The P-cores are based on Intel's high-performing Golden Cove architecture, which provides solid single-threaded performance. Meanwhile, the Gracemont-based E-cores, although lower-performing on their own, are smaller and draw much less power, allowing Intel to pack them in to benefit multi-threaded workloads without blowing the chips' power and thermal budgets.

Based on the same Alder Lake die, both 12900Ks share the same core and thread count (8P+8E). Instead, the most significant difference comes in the speed: the Core i9-12900KS has a whopping 5.5 GHz boost core on its Performance (P) cores, which is 300 MHz higher than the regular K chip. Meanwhile the base frequencies are also improved by 200 MHz higher, leading to a chip that offers 3.4 GHz base and 5.5 GHz boost clockspeeds. That makes the Core i9-12900KS the fastest desktop processor hat Intel has ever created in terms of out-of-the-box core frequency. Even the Efficiency (E) cores have been clocked higher for this SKU, with a 100 MHz bump on both the base and boost frequencies, putting the E cores at 2.5 GHz base and a 4.0 GHz boost.

The engineering tradeoff to the bump in core frequencies on both the Performance (P) and Efficiency (E) cores is that the Core i9-12900KS draws more power, with a base TDP of 150 W and a boost TDP of up to 241 W. This is an increase of 25 W for the base TDP versus the original Core i9-12900K processor, which from our experience, is already a hot running processor that can draw some serious power when overclocked. And there's room to go higher still – like other K-series chips, the 12900KS is multiplier unlocked, meaning users can attempt to overclock these chips even further.

Focusing on price, the Intel Core i9-12900KS is officially priced at $739 in for 1000 chip orders. Street pricing, in turn, is almost spot-on, with Amazon and Newegg charging $735 each. Officially this puts a $150 premium on the top-tier 12900KS, while comparing street prices it's closer to about a $175 premium right now. This also puts it $235 more expensive when directly compared to AMD's most expensive desktop chip, the Ryzen 9 5950X processor ($499), and just shy of $300 over the Ryzen 7 5800X3D ($439). Suffice it to say, when it comes to 'halo' products such as this, any notions or dreams of value typically go out of the window, and users that are looking for the fastest and greatest going to be expected to dig deep in to their wallets. 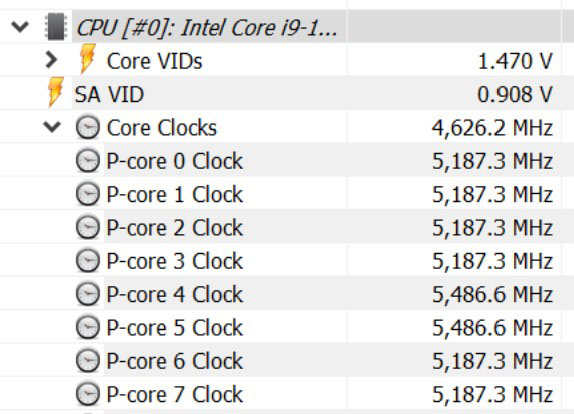 And while there's a significant price difference between the two, make no mistake: the Core i9-12900KS was created to go directly up against AMD's impressive Ryzen 7 5800X3D and its 96 MB of 3D L3 V-Cache. Pitched as the ultimate gaming processor, the Ryzen 7 5800X3D, as we have seen, is very potent in gaming, often vaulting to the top in CPU-limited workloads. Even factoring in the 5.5 GHz performance core boost frequencies, the large pool of L3 cache on the 5800X3D will shine in games that can utilize that extra cache. In the titles where additional cache doesn't influence performance, the insane clock speeds of 5.5 GHz will shine, or so that is the hope for Intel here.

The most significant benefit of Intel's Alder Lake special edition chip is that it isn't a one-trick pony; because this SKU is based on across-the-board clockspeed increases, it offers some serious horsepower for computational tasks. This is where we saw the AMD Ryzen 7 5800X3D lag behind the competition, as L3 cache typically doesn't influence the performance of rendering, encoding, and transcoding as pure core grunt does. It will be interesting to see how the Core i9-12900KS stacks up against the i9-12900K in our computational suite while it will be going metaphorically head to head with the Ryzen 7 5800X3D in our gaming suite.

Although there were some problems initially with the Intel Thread Director when using Windows 10 at the launch of Alder Lake, any core scheduling issues are entirely negated by using the latest Windows 11 operating system. The Intel Thread Director works in tandem with Alder Lake to assign the right P-cores and E-cores to different tasks based on the complexity and severity of the workload. We also test the Core i9-12900KS with DDR5 memory at JEDEC specifications (DDR5-4800 CL40). We are also using Windows 11, which we are using now for CPU and motherboard reviews as we advance into the rest of 2022 and beyond.

For our testing, we are using the following:

All other chips for comparison were run as tests listed in our benchmark database, Bench, on Windows 10.