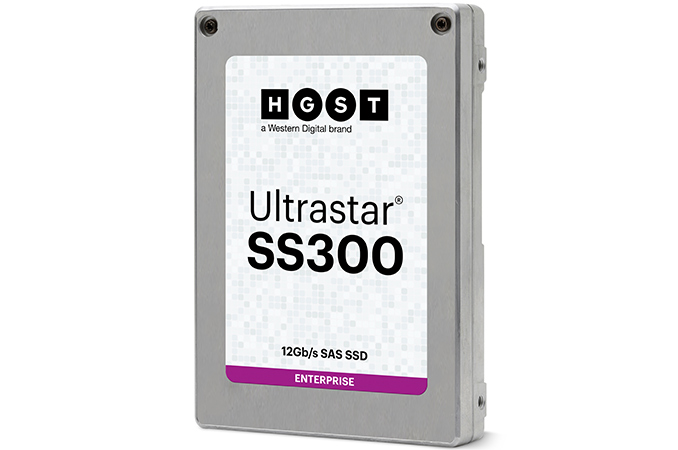 Western Digital has officially introduced its first data center-class SSDs using 3D NAND flash. The new HGST Ultrastar SS300 SSDs are designed for SAS applications with mixed workloads that demand drives with endurance but are not the highest performance possible. The new drives were co-developed with Intel, so they do not have various proprietary SanDisk technologies, such as the Guardian (as some previous-gen Ultrastar SS), but support numerous new features instead.

The Ultrastar SS300 drives use Intel’s 3D NAND memory - which we suspect is their recent 64-layer TLC & MLC - as well as a proprietary controller that was presumably co-designed with Intel. HGST does not disclose many details regarding the chip, but it might be the same controller that powers the recently launched Intel SSD DC P4500 and P4600 drives, albeit featuring a different configuration and a different firmware. From the feature set, the Ultrastar SS300 controller supports extended error correction code (ECC with a 1x10^-17 bit error rate) to enable higher performance and data integrity, exclusive-OR (XOR) parity (in case a whole NAND die fails) as well as parity-checked internal data paths. In addition, the Ultrastar SS300 complies with the T10 Data Integrity Field (DIF) standard, which requires all interconnect buses to have parity protection (on the system level), as well as a special power loss data management feature that does not use supercapacitors. Western Digital will offer various Ultrastar SS300 models with features like TCG encryption, TCG+FIPS, and instant secure erase to comply with different security requirements.

The HGST Ultrastar SS300 SSDs are aimed at various market segments, including financial transactions, e-commerce, virtualization, database analytics, etc. that generate read-intensive and mixed-use workloads and thus need both performance and reliability. The new SSDs come in a 2.5”/15 mm form-factor with SAS 12 Gb/s interface and are drop-in compatible with existing servers. Meanwhile, when compared to direct predecessors, the Ultrastar SS200, the new SS300 offer similar capacities — from 400 GB to 7.68 TB, but the new drives excel the ancestors in most possible metrics (endurance, performance, power, etc.).

As for endurance, various versions of the HGST Ultrastar SS300 support 0.5, 1, 3 or 10 writes per day, thus extending addressable markets of the Ultrastar SS-series to applications that require extra endurance at 10 DPWD. All the Ultrastar SS300 SSDs are rated for 2.5 million hours MTBF and are covered with a five-year limited warranty (or the max PB written, whichever occurs first).

Western Digital has already started to ship its SS300 SSDs to select OEM partners, including Oracle. The company does not announce pricing of the drives since they depend on configurations, volume purchasing and other factors.