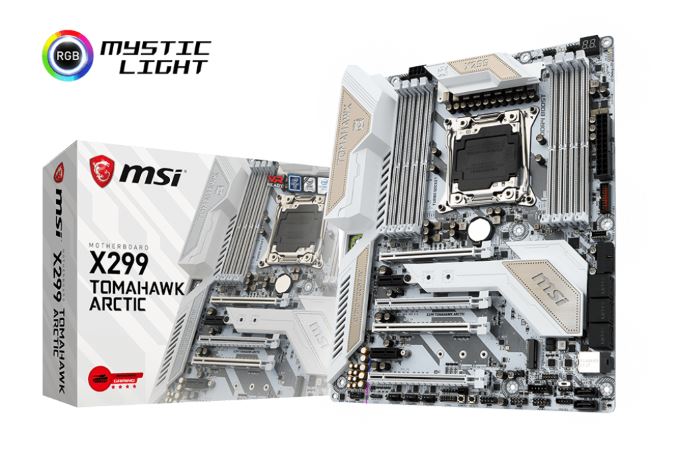 Our first look at MSI X299 offerings arrived in the form of a mid-range board from the Arsenal Gaming series, the Tomahawk Arctic. The Tomahawk line of motherboards, MSI says, have heavy plated heatsinks and "combative looks ready for anything". It uses MSI's branded 'Military Class VI' components and has features for gamers aimed to improve their gaming experience.

MSI released its Arsenal Gaming line back in 2015 with the Z170 chipset. Within the line were board names such as Grenade, Mortar, Bazooka, and the Tomahawk, each supporting a different level of features within the Arsenal line. The Arsenal Gaming Segment is suited for the beginner or casual gamer using integrated graphics or mainstream level VGAs. Features for the casual user have more subtle influences, such as LED lighting that is found on the back of the motherboard for an ambient light approach. The Mousemaster software allows users to tweak their high-end gaming mouse, and an EZ debug LED showing where in the boot process it may be getting hung up. All of the features are claimed to simplify and streamline activities for that casual user and gamer. 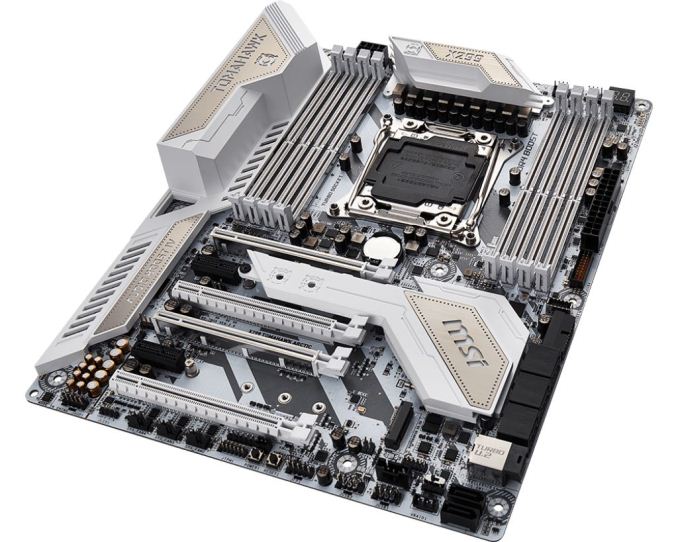 Overall, the CPU performance on the X299 Tomahawk AC was above average, managing to beat out comparable boards in some tests due to the use of Multi-Core Enhancement although some tests were more affected by MCE than others, as well as different tests to other MSI boards. We are not entirely sure why this happened as the testing used the exact same settings and drivers. Even turbo/clock speeds were the same in both tests, so it might be related to how the board ramps up and down the frequency on the local environment at the time. Boot times were in the middle of the pack, while power use was slightly higher than the previous boards tested. Overclocking results were the same as our other high-end motherboard tests, with our i9-7900X hitting 4.5 GHz at our temperature limit. The voltage needed to reach the clocks was slightly less, though not enough to push past our current temperature limited clock speeds. The small variance could also be due to software since the board does not have voltage read points to confirm with a digital multi-meter.

The Tomahawk gives users almost the full gamut of storage connectivity. There are six SATA ports, two M.2 slots, and one U.2 port. The two M.2 slots go through the chipset, and sends the data through the same path as the eight SATA ports to do so. With that, when using M.2 SATA devices, some SATA ports will be disabled. The U.2 port and the third PCIe slot are switched, meaning only one can be used at once. There are many options and many outcomes when using these devices. It is explained in more detail later in the review, as well as all the details are found in the manual (p32).

There are six total PCIe slots with the slots in positions 1, 4, and 6 are all CPU connected lanes (intended for video cards) while PCIe slots 2, 3, and 5 are sourced from the chipset. For connectivity, the MSI X299 Tomahawk has a USB 3.1 (10 Gbps) Type-C port and Type-A port on the back panel via an ASMedia 3142 controller, with three other 5 Gbps ports on the back panel managed by the ASMedia 1074 hub. The chipset delivers the remainder of the 5 Gbps and USB 2.0 ports. Audio comes through a Realtek ALC1220 codec, and networking from an Intel I219-V controller.

The X299 Tomahawk Arctic is currently priced at $280 at both Newegg and Amazon. The price point places the Tomahawk Arctic in the middle of MSI's entire product stack, and between its twin siblings within the Arsenal line, the Tomahawk (non-Arctic) and the Tomahawk AC. They share the exact same DNA but are both non-white, while the Tomahawk AC adds Wi-Fi and Bluetooth using the Intel Dual Band Wireless AC 8265 module.

The two mini-ITX versions are seemingly hard to find at this moment, in the US at least.

Board partners have launched dozens of motherboards on this platform already, several of which we will have an opportunity to look over in the coming weeks and months.

Other AnandTech Reviews for Intel’s Basin Falls CPUs and X299

There has been some excellent work done by Igor Wallossek over at Tom’s Hardware, with thermal probes, thermal cameras, and performance analysis. The bottom line is that motherboard vendors need to be careful when it comes to default settings (if MCT is enabled by default) and provide sufficient VRM cooling in all scenarios – either larger and heavier heatsinks or moving back to active cooling. This means there are going to be some X299 boards that perform normally, and some that underperform based on BIOS versions or design decisions.