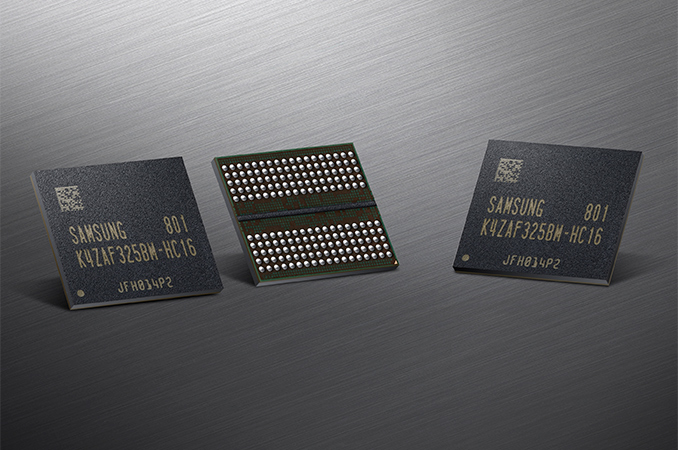 This week, Samsung has announced that it has started mass production of its GDDR6 memory chips for next-generation graphics cards and other applications. The new chips will be available in 16 Gb densities and will feature an interface speed that is significantly higher when compared to that of the fastest GDDR5 and GDDR5X ICs can offer.

GDDR6 is a next-generation specialized DRAM standard that will be supported by all three leading makers of memory. Over time, the industry will introduce a great variety of GDDR6 ICs for different applications, performance and price requirements. What Samsung is announcing this week is its first 16 Gb GDDR6 IC that features an 18 Gbps per pin data transfer rate and offers up to 72 GB/s of bandwidth per chip. A 256-bit memory subsystem comprised of such DRAMs will have a combined memory bandwidth of 576 GB/s, whereas a 384-bit memory subsystem will hit 864 GB/s, outperforming existing HBM2-based 1.7 Gbps/3092-bit memory subsystems that offer up to 652 GB/s. The added expense with GDDR6 will be in the power budget, much like current GDDR5/5X technology.

The new GDDR6 architecture enables Samsung to support new and higher data transfer rates with non-esoteric memory form factors. To increase the interface speed, GDDR6 memory was redesigned both internally and externally. While details about the new standard will be covered in a separate article, two key things about the new memory tech is that GDDR6 features a x8/x16 per-channel I/O configuration, and each chip now has two channels. By contrast, GDDR5/GDDR5X ICs feature a x16/x32 I/O config as well as one channel per chip. While physically GDDR6 chips continue to feature a 16-/32-bit wide bus, it now works differently when compared to prior generations (as it consists of two channels).

In addition to higher performance, Samsung’s GDDR6 16 Gb chips also operate at 1.35 V voltage, down 13% from 1.55 V required by high-performance GDDR5 ICs (e.g., 9 Gbps, 10 Gbps, etc.). According to Samsung, the lowered voltage enables it to lower energy consumption of GDDR6 components by 35% when compared to ultra-fast GDDR5 chips. Samsung attributes lowered voltage to its new low-power circuit design. Meanwhile, based on information we know from Micron and SK Hynix, their GDDR6 DRAMs will also operate at 1.35 V.

Samsung uses one of its 10nm-class process technology to produce its GDDR6 components. The company claims that its 16 Gb ICs bring about a 30% manufacturing productivity gain compared to its 8 Gb GDDR5 chips made using its 20 nm process technology. Typically, Samsung’s productivity gain means increase in the number of chips per wafer, so the company has managed to make its 16 Gb ICs smaller than its previous-gen 8 Gb ICs. The company does not elaborate on its achievement, but it looks like the new chips are not only made using a thinner process technology, but have other advantages over predecessors, such as a new DRAM cell structure, or an optimized architecture.

Samsung did not disclose when it plans to ship its GDDR6 DRAMs commercially, but since it had already started mass production, it is highly likely that the company’s clients are ready to build products featuring the new memory.