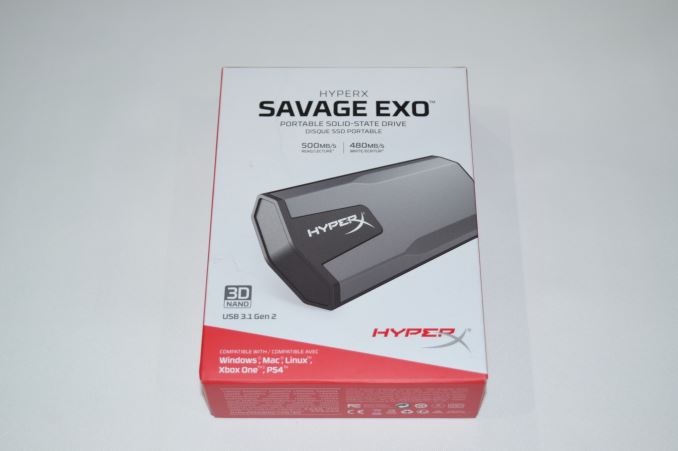 The advent of 3D TLC flash has enabled a large number of budget-friendly bus-powered solid-state storage devices. On the external front, these devices fall under three major categories:

Kingston's HyperX Savage EXO SSD falls into the second category. It puts a M.2 2280 SATA SSD behind a SATA-to-USB 3.1 Gen 2 Type-C board and encloses them in a stylish case to target gamers. Kingston claims speeds of up to 500 MBps reads / 480 MBps writes, and a 20% reduction in game load times when used with leading game consoles. Does the product deliver on its claims, and more importantly, how does it fare against alternatives in the market?

Kingston is no stranger to the external flash storage market, and its HyperX brand has produced some of the best-performing thumb drives using a flash controller with a direct USB interface. Kingston has also been a trusted vendor in the internal SSD space. It is surprising that we haven't had an external SSD from Kingston prior to the launch of the HyperX Savage EXO. 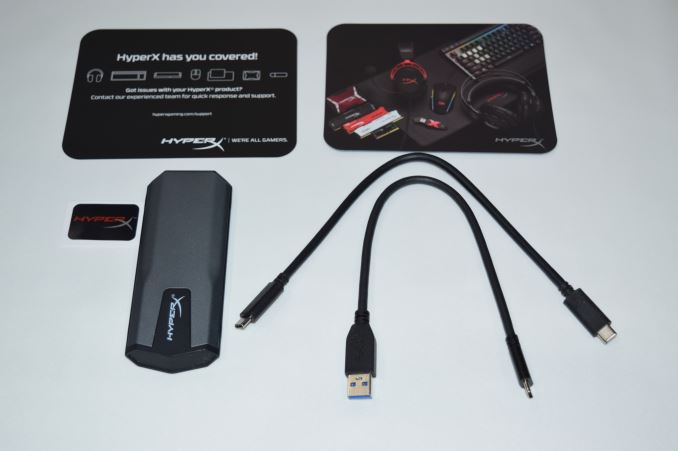 The HyperX Savage EXO is a 124mm x 49mm x 10mm device weighing 56g. The form-factor points to the use of a M.2 2280 SSD inside. It has a Type-C interface, and Kingston bundles two 12 in. USB cables (1x Type-C to Type-C, and, 1x Type-A to Type-C) along with the device. The drive comes pre-formatted in exFAT, allowing it to be used out-of-the-box with Windows PCs, Macs, and various game consoles.

Prior to looking at the internals, CrystalDiskInfo provides some insights.

Most of the S.M.A.R.T attributes are vendor-specific, but, the key takeaway here is the ability to activate TRIM on the SSD, and the ability to get an idea of the wear on the drive.

The HyperX Savage EXO external SSD is a well-built device with no screws holding the case together. Opening up the device involved prying out the casing at the seams - quite a difficult exercise compared to our experience with other external storage devices. The M.2 2280 SATA SSD seems to be the M.2 version of the Fury RGB SSD that was released along with the Savage EXO. The Toshiba BiCS 64L 3D TLC flash is packaged by Kingston and a Marvell 88SS1074 controller is present on the single-sided PCB. If this combination sounds familiar, it is actually the same hardware as our favorite external SSD - the SanDisk Extreme Portable SSD. The firmware is obviously quite different, as Marvell gives plenty of leeway to the SSD manufacturers to differentiate themselves compared to vendors such as Phison and Silicon Motion who have more turnkey designs.

The M.2 SSD is connected to a small board that actually sports the Type-C interface. ASMedia's ASM235CM, acting as a SATA - USB 3.1 Gen 2 bridge chip, is the major component in this board. Again, this is the bridge chip used in popular high-performance external SSDs such as the SanDisk Extreme Portable SSD and the Samsung T5 Portable SSD. The only thermal protection is a single thermal pad affixed to the case that completely covers the M.2 SSD. As we shall see further down, the thermals are not a concern for the HyperX Savage EXO's performance.

In the rest of the review, we have the list of DAS units compared against each other on various metrics:

Prior to looking at the benchmark numbers, we take a brief detour to look at our evaluation setup.

Evaluation of DAS units on Windows is done with the testbed outlined in the table below. For devices with a USB 3.1 Gen 2 (via a Type-C interface) connection (such as the Kingston HyperX Savage EXO 480GB that we are considering today), we utilize the USB 3.1 Type-C port enabled by the Intel Alpine Ridge controller. It connects to the Z170 PCH via a PCIe 3.0 x4 link.

The full details of the reasoning behind choosing the above build components can be found here.

Kingston claims read and write speeds of 500 and 480 MBps respectively, and these are backed up by the ATTO benchmarks provided below. Unfortunately, these access traces are not very common in real-life scenarios.

CrystalDiskMark, despite being a canned benchmark, provides a better estimate of the performance range with a selected set of numbers. As evident from the screenshot below, the performance can dip to as low as 20 MBps for random reads.

Our testing methodology for DAS units also takes into consideration the usual use-case for such devices. The most common usage scenario is transfer of large amounts of photos and videos to and from the unit. The minor usage scenario is importing files directly off the DAS into a multimedia editing program such as Adobe Photoshop. 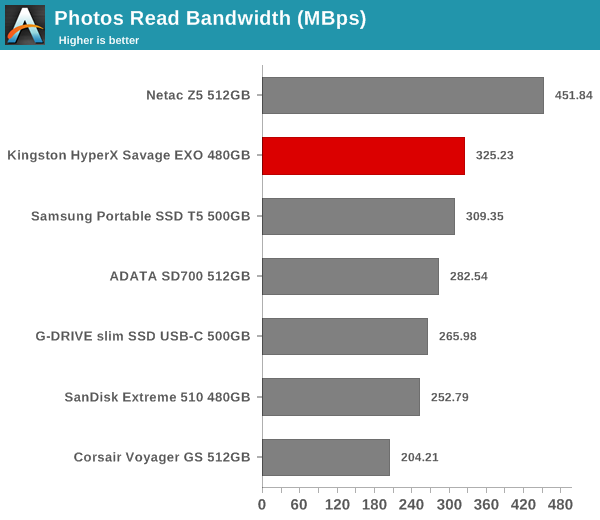 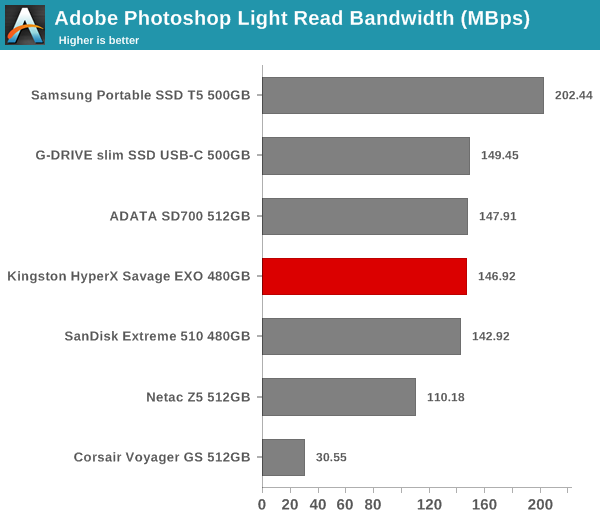 An important point to note here is that each of the first three blue and green areas correspond to 15.6 GB of writes and reads respectively. Throttling, if any, is apparent within the processing of the photos suite itself. The HyperX Savage EXO doesn't exhibit any signs of thermal throttling, but, it does seem to have a really small SLC cache as shown by the drop in write speeds from ~300 MBps to ~175 MBps very early on in the Photos suite.

The HyperX Savage EXO has an excellent thermal solution with temperatures not exceeding 58 C even after being subject to more than 200GB of non-stop traffic. This is a combination of the thermal solution (silicone pad and case design) as well as the lowered write speeds after the SLC cache gets filled.

The performance consistency for real-world applications was looked at in the previous sub-section. We recently added a test to determine the effectiveness of the thermal solution for sustained workloads. After deleting the SSD volume, a fio workload was set up to write sequential data to the raw drive with a block size of 128K and iodepth of 32 to cover 90% of the drive capacity. The internal temperature, instantaneous write data rate, and total amount of data written in total till that point of time were recorded.

We see the write speed start off around the claimed numbers (~480 MBps), but, within a few seconds, the speeds drop down to the sub-200 MBps range. As the writes keep on piling up, speeds sometimes drop down to the low 10 MBps range, though a similar number of 450 MBps+ peaks also exist. On the whole, consistency is not a hallmark of the drive under sustained write workloads.

The above exercise also allows us to determine the SLC cache size and/or the amount of data that can be written in one shot without a drop in the write data rate. The graph below plots the transfer rate and the total data transfer amount from the start of the fio workload to the approximate timestamp at which the transfer rate shows a significant drop.

The HyperX Savage EXO is a bus-powered device, and it is given that the peak power consumption can't go beyond 4.5W to maintain compatibility with as wide a range of systems as possible. It is still relevant to take a fine-grained look at the power consumption profile. Using the Plugable USBC-TKEY, the bus power consumption for the device was tracked while the CrystalDiskMark workloads were processed. The workloads were set up with an interval time of 30s.

We see that the SSD idles around the 1.8W mark, and the peak power consumption (under heavy sequential write workloads) is just short of 4W.

The Kingston HyperX Savage EXO SSD supports TRIM under Windows as long as the volume is formatted in NTFS.

Moving on to the pricing aspect, the drive was launched at $220 on September 23rd, 2018. It is available on Amazon right now for $128. Of all the SSDs that we have evaluated in its capacity class, only the Portable SSD T5 from Samsung at $100 has a lower price per GB. Samsung's pricing is hard to beat due to the vertically integrated nature of its SSD business. We have not directly evaluated the SanDisk Extreme Portable SSD's 500GB version, but, its 1TB version impressed us a lot. The SanDisk Extreme Portable SSD 500 GB is priced at $110. 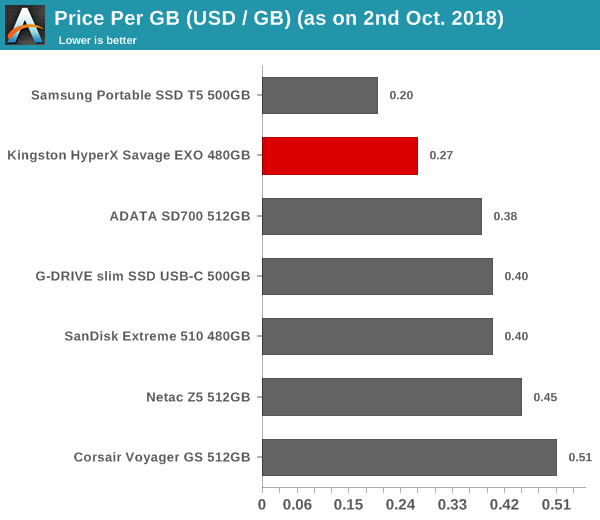 Even at $128, we believe that the Kingston HyperX Savage EXO a hard sell. To its credit, the device is currently Kingston's fastest bus-powered external storage device. The performance, as we see in the graphs above, is better than the external SSDs from various vendors released in the 2015 - 2017 timeframe. The hardware inside the Savage EXO is certainly powerful (it is essentially the same Marvell 88SS1074 controller, Toshiba / SanDisk BiCS 64L 3D TLC flash, and the ASMedia ASM235CM SATA-USB bridge as the SanDisk Extreme Portable SSD). However, the firmware needs a major overhaul in order to better serve the needs of its target market.