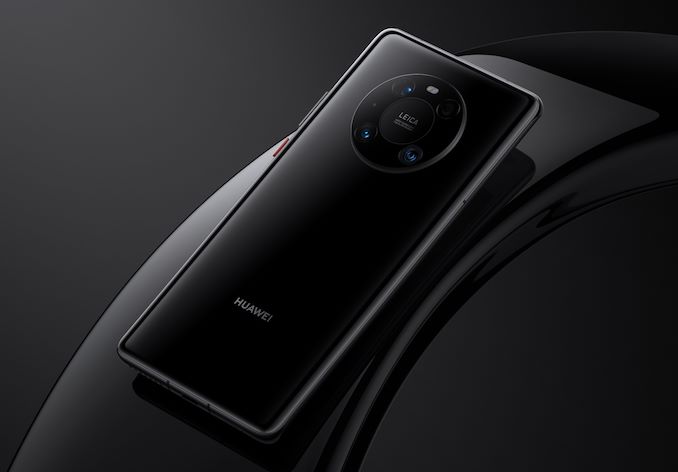 Today Huawei took the stage to unveil the new Mate 40 series of devices. In the form of the Mate 40, Mate 40 Pro and the Mate 40 Pro+, the new phones represent the company’s leading edge in terms of technology, mostly enabled by the new Kirin 9000 chipset which is manufactured on a new 5nm manufacturing node, promising great leaps in performance and efficiency.

The new Kirin 9000 is at the core of the discussion – and it’s also Huawei’s biggest problem as the new silicon is no longer under production since September due to US sanctions on the company, representing a much more substantial threat than the already existing limitations on the company’s products, such as not being able to ship with Google Mobile Services.

As mentioned, the biggest news today was the official unveiling of the new HiSilicon Kirin 9000 SoC. Manufactured on TSMC’s brand new 5nm process node, the Kirin 9000 represents the second and likely only other chip design after Apple’s A14 to ship in 2020. Huawei had made a lot of parallels to Apple’s and Android SoC competitors such as Qualcomm – focusing on some important milestones that the competition hasn’t yet been able to achieve at the high-end segment, such as integrating the 5G modem within the SoC instead of relying on an external chip. In this regard, Huawei calls the Kirin 9000 the first and only 5nm 5G SoC.

The chip is also of substantial complexity, as Huawei discloses if features 15.3 billion transistors, 30% more than the recently announced Apple A14 which “only” features 11.8bn. An explanation for the vastly larger die size of course is the inclusion of an on-die modem which is currently lacking in other SoCs from the competition (due to various design & cost reasons). However, the modem isn’t the only IP block that bloats up the die size, as HiSilicon opted for a quite gigantic GPU configuration:

Featuring a Mali-G78MP24, we’re actually seeing the chip designers rely on the maximum configuration of the G78 IP that Arm offers. HiSilicon had previously skipped the Mali-G77 generation which actually had been a large architectural change for Mali GPUs so it’s not exactly comparable, but the previous generation Kirin 990 used an 16-core Mali-G76, which is dwarfed by the new 24-core GPU. A more valid comparison would by the Exynos 990 with its G77MP11 configuration – and here the new Kirin 9000 features essentially 2.2x the cores.

Undoubtedly TSMC’s new 5nm node density allows for designers to employ more transistors in the same area, but this new GPU is still quite a freak that comes quite unexpectedly, given the company’s history on focusing on cost, rather than all-out performance. In terms of absolute performance metrics, the Kirin 9000 is quoted at being 52% faster than the Snapdragon 865+, which is a very large leap and should put the SoC and the Mate 40 series near the top positions in terms of performance.

We don’t yet know the clock frequencies of the design, but I expect it to be very low given the large number of cores, representing an extreme case of a “wide and slow” configuration. 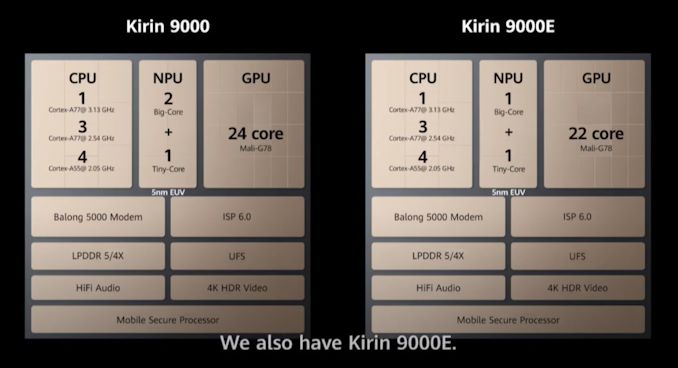 The rest of the SoC also has seen updates, although not quite as large within the competitive landscape. The CPUs have been updated from Cortex-A76 cores to the newer Cortex-A77 IP, and HiSilicon has shifted from a 2+2+4 design to a 1+3+4 design, much like seen in recent generation Qualcomm chips. The new cores clock up to 3.13GHz on the fastest core, which is a slight lead over the Snapdragon 865+. HiSilicon’s product cycle means that it rarely manages to catch Arm’s new CPU IP release cycle, and as we expected doesn’t take advantage of the newer A78 or X1 CPUs that we expect from upcoming Exynos and Snapdragon chipsets in a few months.

Other improvements of the SoC include a new generation NPU – actually this here depends on the binning variant of the SoC as HiSilicon will have both a regular Kirin 9000 as well as a lower-end Kirin 9000E which will differ in terms of a slightly smaller GPU with 22 cores and only one big NPU core rather than two in the fastest SoC bin. It’s likely that the GPU takes up such a large amount of area on the chip that HiSilicon had to resort to functional binning of the chip to get out more working units, something we rarely see in the mobile space as power-binning is the preferred method of binning.

The new chip features a new hybrid LPDDR4X/5 memory controller, and the Mate 40 series should feature the latter LP5 memory, although Huawei hasn’t yet confirmed the exact specifications.

There’s also a new generation image signal processor which is said to improve HDR for both stills and video recording. Huawei also now boasts that this is the 3rd generation 5G modem, promising significant advantages over the competition such as the Qualcomm X55 modem.

The 5nm manufacturing node also brings with it power efficiency improvements, and the most important disclosure here is the fact that Huawei is promising 25% better CPU efficiency versus the Snapdragon 865+. Given that both SoCs have almost the same CPU configuration at very similar clock frequencies, the majority of that 25% figure should be due to the process node improvements, which bodes well for future 5nm chipsets, as well as Apple’s A14 chip.

The big elephant in the room is the fact that the Kirin 9000 is going to be a unicorn product – due to US sanctions TSMC no longer is allowed to produce silicon for Huawei and has stopped delivering chipsets last September 15th. Speculations are that Huawei had only managed to received 3-5 million units – the actual number is unknown as Huawei refuses to comment on the matter.

In terms of the actual devices, we’ve seen the announcements of three phones. The “regular” Mate 40 features a simpler design and reminds us more of a OnePlus 8 when viewed from the front, distinguished by a 6.58” OLED screen with a 2376 x 1080 resolution. Huawei opts for a mid-range 90Hz refresh rate but does offer a 240Hz touch sampling rate. Overall, this variant of phone seems pretty straightforward.

The Mate 40 Pro and Pro+ on the other hand have a more exotic design as Huawei again resorted to a curved screen design that falls to the sides with an 88° curvature. Huawei had used such a design before in the Mate 30 Pro, and frankly I found it to be annoying and a bad design that was just impractical. The new Mate 40 Pro’s don’t seem to showcase any significant improvements and thus I still have to get a hands-on with the devices, I’m pretty sceptical about the ensuing ergonomics of the phones.

In general, this newer generation represents a bigger form-factor design than the Mate 30 Pro series as Huawei has increased the width of the phone from 73.1mm to 75.5mm, essentially a step-size bump in terms of device size, such as going from an S20+ to an S20 Ultra.

Weight has consequently also gone up from 198g to 212g. Battery size is described at 4400mAh typical capacity which is actually 100mAh lower than the Mate 30 Pro. Huawei still says that due to the efficiency of the SoC and the overall device, it should last for longer than competing smartphones.

In terms of camera setup, the new device’s hardware isn’t all too new compared to the P40 series.

All the models feature the same main camera module: a 50MP RYYB sensor with a 1/1.28” size and 1.22µm pixels, binning down to 2.44µm for 12.5MP images. The optics are a wide 23mm equivalent lens with f/1.9 aperture. The main problem of this module was that Huawei’s default camera settings always crops in to a 27mm equivalent field-of-view, producing outstretched native 10MP images that always upscaled up to 12.5MP which wasn’t always great. The benefits of the sensor come in low-light where Huawei’s phones are still unbeatable.

It's to be noted that the main camera only features OIS on the Pro+ variant of the phone, which is a rather very bad differtiation to make in terms of product segmentation as it'll give a worse off experience for the majority of users.

The telephoto units are also the same as on the P40 series; the Mate 40 only comes with a 3x optical 12MP unit with f/2.4 aperture and OIS, whilst the P40 Pro uses the 5x optical 12MP f/3.4 unit with OIS. These result in respectively 85mm and 125mm equivalent focal lengths. 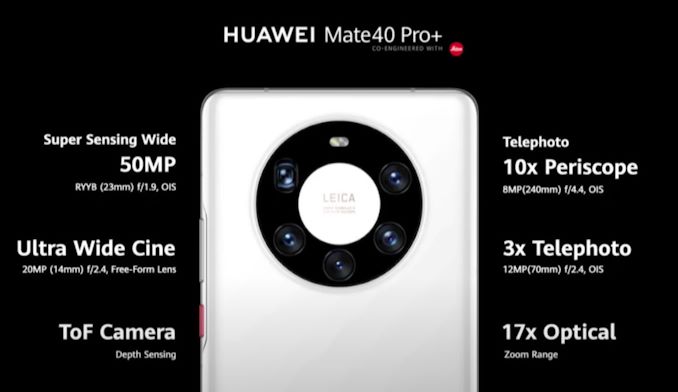 The Mate 40 Pro+ switches the periscope unit to a 10x optical magnification with a 240mm equivalent focal length with a smaller 8MP sensor and f/4.4 aperture, with OIS, and includes a fourth module in the form of a 12MP 3x optical 70mm equivalent 12MP f/2.4 unit with OIS.

The only real in interesting new announcement on the part of the camera setup was on the Mate 40 Pro+’s ultra-wide unit. If features the same 20MP sensor as on the Mate 40 Pro, however the optics now include a free-form lens which allows the camera to capture distortion-free and rectilinear images – something which all other smartphones today have to achieve via software corrections with large quality compromises towards the edges of the frame. Having a free-form lens should result in excellent image quality that’s above the competition – it’s just a pity that Huawei is only using this on the more expensive Mate 40 Pro+.

In terms of camera image quality improvements, Huawei claims much better HDR processing that’s above the competition this generation, as well as just overall a greatly improve camera software experience.

Other improvements of the phones include better speakers, achieving a claimed 150% better bass response, as well as the introduction of 66W wireless charging and 50W wired charging.

In general, the Mate 40 series looks interesting on paper, however will still continue to be plagued by the fact that Huawei cannot ship the phones with Google Mobile Services. It’s been a year since Huawei first launched the Mate 30 series without the Google Play store, and has been making headways in their own in-house app store, the AppGallery, but even today it’s missing a ton of applications that a lot of users would consider critical to a mobile smartphone experience.

Subjective design opinions aside, the Mate 40 seem to offer excellent hardware even though the premium models represent quite a large price bump.

The biggest question for Huawei will be how and where they will be selling these phones. The launch event today includes prices in Euros, but it’s unclear exactly in which markets the company will actually be selling the phones, and which of the variants will be available. There’s also the pressing matter that Huawei only has a fixed and limited supplies of Kirin chips available – putting a cap on the amount of Mate 40 units the company can sell. Given all these uncertainties, Huawei has some very hard times ahead of it.