Upon completion of the hardware configuration of the two systems and freshly installing the OS, we took some time to look into their BIOS interfaces. The videos below present the entire gamut of available options for both systems.

ASRock Industrial primarily plays in the B2B space, where a functional feature-rich BIOS is valued over a fancy GUI-based one with fewer knobs. In that context, it is not hugely surprising that the BIOS interface in both systems is similar and spartan in nature. Since both systems are meant for business deployment as the primary use-case, the control knobs mainly relate to the activation of specific CPU and chipset features, along with the peripherals. The BIOS home screen provides a quick overview of the system configuration - processor details, along with the DRAM configuration (including the memory controller speeds).

The BIOS for the NUC BOX-1260P supports configuration of AMT, allowing for remote administration by IT personnel. It also includes ability to remotely wipe the system along with secure erasing of the internal SSD. BIOS updates are possible through the built-in Instant Flash utility. Basic control over fan speed is possible, though the ability to fine-tune the fan curves that is available in consumer-oriented BIOS systems is absent.

The BIOS home screen for the 4X4 BOX-5800U is similar. The key differences are in the CPU configuration section. While the BIOS for the Alder Lake system doesn't expose the PL1 and PL2 values for end-user configuration, the Cezanne system offers a bit of flexibility with the 'CPU Operating Mode' option. In the 'Normal Mode' (default), the PL1 and PL2 values are set to 20W and 24W, and the fan speed adapts to the temperature. Selecting the 'Performance Mode' sets the PL1 and PL2 values to 25W and 30W respectively, at the cost of running the fan at full speed throughout.

True to its business focus, the 4X4 BOX-5800U retains the DASH functionality for remote administration. We had covered DASH in detail as part of our 4X4 BOX-4800U review - it comes across as a credible alternative to vPro-based out-of-band management. Other BIOS settings are similar to the ones in the Alder Lake-P system.

Thanks to the B2B focus of the products, ASRock Industrial supplies detailed block diagrams of the motherboards in both systems in their documentation. The NUC BOX-1260P platform clearly shows one of the Type-C ports in the front panel (the one adjacent to the Type-A port, as we found via experiments described later on) having the capability to act as a Thunderbolt 4 host port. The HD Audio bus is connected to the Realtek ALC233 codec, and the chipset PCIe lanes are used to enable the 2.5G LAN ports using the Intel I-225LM controllers. The M.2 2230 Wi-Fi slot is backed up by a PCIe x1 connection from the chipset, while the M.2 2260 / 2280 slot is connected to four PCIe 4.0 lanes directly from the CPU. 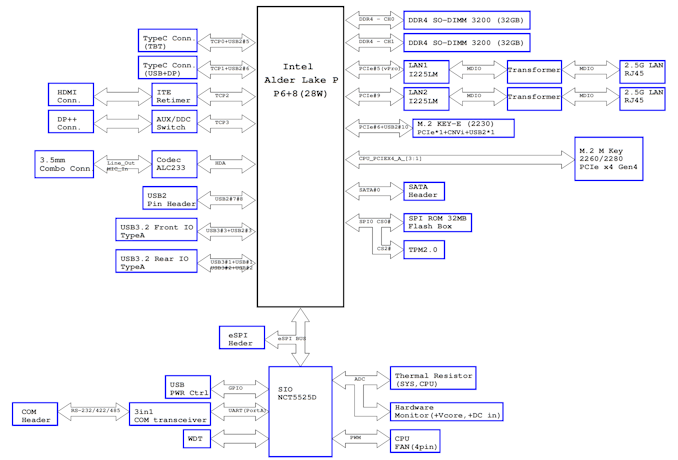 The above aspects are also brought out in the AIDA64 system report:

Based on the system report, the Wireless AX211 Wi-Fi 6E WLAN card is connected via CNVi to the Alder Lake-P package. The rest of the PCIe connections are as expected from the block diagram. 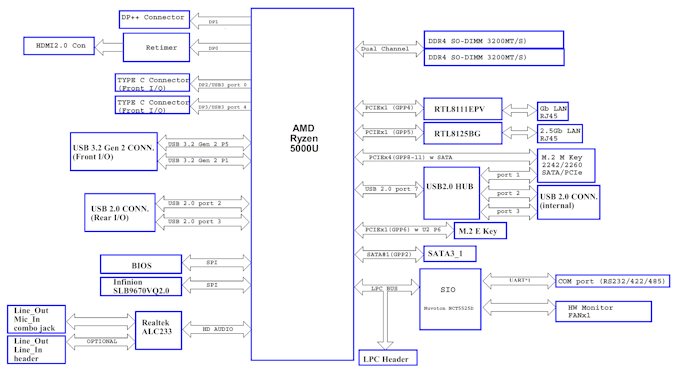 The above aspects are also brought out in the AIDA64 system report:

In the table below, we have an overview of the various systems that we are comparing the ASRock Industrial NUC BOX-1260P and 4X4 BOX-5800U against. Note that they may not belong to the same market segment. The relevant configuration details of the machines are provided so that readers have an understanding of why some benchmark numbers are skewed for or against the two machines when we come to those sections.

In general, we review SFF and UCFF systems with the BIOS options set to default. This is the standard deployment scenario of a vast majority of end-users. However, the two ASRock Industrial systems we are considering today turned out to be a bit of a challenge. Firstly, ASRock Industrial specifically asked us to evaluate the 4X4 BOX-5800U with the CPU Operating Mode set to 'Performance'. After a bit of back and forth with ASRock Industrial's Technical Support Division (TSD), we found that the setting involved configuration of different PL1 / PL2 equivalents for the Ryzen SoC. Since we had not done that type of investigation into the notebook-focused Ryzen processors, we took advantage of this BIOS feature to evaluate the 4X4 BOX-5800U in both Normal and Performance modes. The system completed our evaluation process in both modes with mostly expected results (based on AMD's claims for the processor's performance).

The evaluation of the NUC BOX-1260P turned out to be a long and protracted affair. Our review sample shipped with BIOS P1.20. After our first benchmarking round, we found that the system performed worse than the NUC BOX-1165G7 (TGL-U i7) - which, in turn, was performing worse than the NUC11TNKi5 (TGL-U i5) across all benchmarks. After working closely with ASRock Industrial's TSD, we found that the default BIOS (P1.40) for the NUC BOX-1165G7 set both PL1 and PL2 values to 28W - a setting apparently optimized for industrial deployment. We put in some tweaks to better reflect usage in a home / business scenario. 'Advanced > CPU Configuration > CPU Operation Mode' was changed from default 'Normal Mode' (PL1 = 28W / PL2 = 28W) to 'Performance Mode' (PL1 = 38W / PL2 = 55W), 'Advanced > CPU Configuration > CPU C-States Support' was changed from default 'Disabled' to 'Enabled', 'CPU C States Support > Enhanced Halt State (C1E)' set to 'Enabled', 'CPU C States Support > Package C State Support' set to 'Auto', and 'CPU C States Support > CFG Lock' left at 'Disabled'. This (BIOS Tweaks) setting for the NUC BOX-1165G7 brought out performance numbers better than the NUC11TNKi5 (as one would expect). Coming back to the NUC BOX-1260P, we found that the CPU Operation Mode option was no longer present. ASRock Industrial's TSD then went back to the drawing board, and provided us with a string of BIOS releases in order to configure the C-States support and various other tweakable aspects to optimal values. After evaluating around four different BIOS versions, we finally decided to go with the default settings of BIOS 1.2E (ASRock Industrial is currently providing this as a beta version while qualifying it for public release).

The list of compared systems in the following sections represent a wide variety in the same form-factor. As a representation of Tiger Lake-U, we have the NUC BOX-1165G7 with BIOS tweaks, and the Intel NUC11TNKi5. The 4X4 BOX-4800U, ASUS PN50, and ASUS PN51-E1 represent Renoir, and the MinisForum U850 provides some context for the results from the perspective of a 15W Comet Lake-U system. Within the NUC BOX-1260P and the 4X4 BOX-5800U, we have three systems - the BOX-1260P with BIOS 1.2E, and the BOX-5800U in 'Normal' and 'Performance' modes.