CINEBENCH 10, which is based on Maxon's Cinema 4D rendering engine, is our next test. This test is easy to repeat at home and one of the few benchmarks that can use up to 16 cores. This benchmark was performed on Windows 2003 x64 R2. Clock-for-clock, the Intel CPUs are about 15% faster. The top Intel CPU beats the best AMD chip by a margin of 40%. A dual-core Xeon 5472 scores in the 22k range making it a much cheaper and lower power option for those of you looking for a faster render server than the AMD 8356. In this case, you might even ask yourself if a cluster of dual-socket 5472 is not a much better solution than our quad monsters.


It is a very small difference but the Opteron seems to gain just a tiny bit more out of 64-bit than the Intel's Xeon. Of course we should try to see how the platforms scale:


The scaling numbers are consistent: the Opteron scales just a little bit better. That is no surprise, but do understand that CINEBENCH runs almost perfectly in the L2 cache.

We used the "architecture" scene which is included in the SPEC APC 3dsmax test. All tests were done with 3dsmax's default scanline renderer, SSE enabled, and we rendered at 720p (1280x720) resolution. We measured the time it takes to render 10 frames from 20 to 29. All results are reported as rendered images per hour; higher is thus better. We used the 32-bit version of 3dsmax 2008 on Windows 2003 x64 R2 - for some weird reason the 64-bit version is a bit slower (especially when you use the scanline renderer). 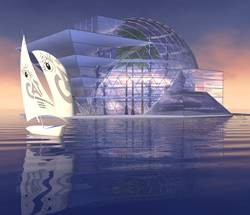 Although the quad Opteron 8356 does a little better here, the advantage over the dual-socket Intel 5472 is too small. From a TCO point of view, dual-socket 5472 render servers are the way to go. The quad Xeon at 2.4GHz is also not capable of leaving its 45nm brother far behind. A quad 2.93GHz server system is not only a lot more expensive, it consume also a lot more power as we will see further.