Clearly, six cores and 16MB of L3 cache does not come cheap: 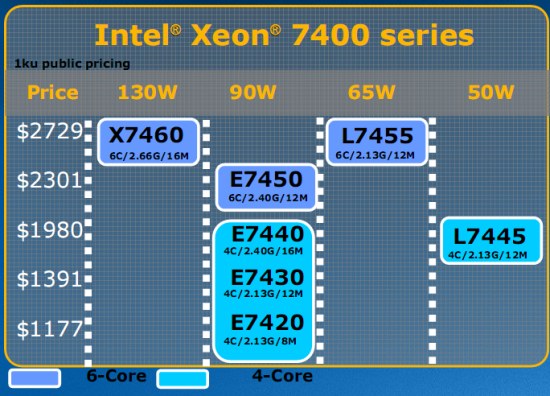 Pricing and TDP of the Xeon 74xx series

Let us see how this compares with the current AMD pricing, which AMD has not updated since March 2008.


If we use the numbers from our quad socket comparison, it is clear that the two top models of the newest Xeons are out of reach of AMD. You might remember that a 2.5GHz Opteron 8360 performs more or less at the level of a 2.93GHz Xeon X7350. The E7450 that replaces the X7350 has six improved cores and a massive 12MB L3, which should ensure the newest Xeon easily outperforms the X7350 despite having a clock speed disadvantage of about 20%. Intel remains stubborn when it comes to the lower power CPUs, which come with a huge price premium. This leaves a small opening for AMD with its upcoming 45nm Shanghai CPUs.