The upcoming Intel Nehalem CPU has been in the spotlight for months now. In contrast and despite the huge die size and 1.9 billion (!) transistors, the 6-core Xeon 74xx is a wallflower for both the public as Intel's marketing. However, if you've invested in the current Intel platform, the newly launched Intel 74xx series deserves a lot more attention.

The Xeon 74xx, formerly known as Dunnington, is indeed a very interesting upgrade path for the older quad socket platform. All Xeon 74xx use the same mPGA604 socket as previous Xeons and are electrically compatible with the Xeon 73xx series. The Xeon 73xx , also known as Tigerton, was basically the quad-core version of the Xeon 53xx (Clovertown) that launched at the end 2006. The new hex-core Dunnington combines six of the latest 45nm Xeon Penryn cores on a single die. As you may remember from our dual socket 45nm Xeon 54xx review, the 45nm Penryn core is about 10% to 20% faster than its older 65nm brother (Merom). There is more: an enormous 12MB to 16MB L3 cache ensures that those six cores access high latency main memory a lot less. This huge L3 also reduces the amount of "cache syncing" traffic between the CPUs, an important bottleneck for the current Intel server platforms.

With at least 10% to 20% better performance per core, two extra cores per CPU package, and an upgrade that only requires a BIOS update, the newest Xeon 7460 should be an attractive proposal if you are short on processing power.

Dunnington was announced at the past IDFs as "extending the MP leadership". Readers who read our last quad socket report understand that this is a questionable claim. Since AMD introduced the Opteron 8xxx in April 2003, there has never been a moment that Intel was able to lead the dance in the quad socket server market. Sure, the Intel 73xx was able to outperform the AMD chip in some areas (rendering), but the AMD quad-core was still able to keep up with Intel chip in Java, ERP, and database performance. When it comes to HPC, the AMD chip was clearly in the lead.

Dunnington might not be the darling of Intel marketing, but the chip itself is a very aggressive statement: let us "Bulldoze" AMD out of the quad socket market with a truly gigantic chip that only Intel can produce without losing money. Intel is probably - courtesy of the impressive ultra low leakage 45nm high-K process technology - the only one capable of producing large quantities of CPUs containing 1.9 billion transistors, resulting in an enormous die size of 503 mm2. That is almost twice the size of AMD's upcoming 45nm quad-core CPU Shanghai. Even IBM's flagship POWER6 processor (up to 4.7GHz) is only 341 mm2 and only has 790 million transistors.


The huge, somewhat irregular die - notice how the two cores in the top right corner are further away from the L3 cache than the other four - raises some questions. Such an irregular die could introduce extra wire delays, reducing the clock speed somewhat. Why did Intel not choose to go for an 8-core design? The basic explanation that Patrick Gelsinger, General Manager of Intel's Digital Enterprise Group, gave was that simulations showed that a 6-core with 16MB L3 outperformed 8-core with a smaller L3 in the applications that matter the most in the 4S/8S socket space. 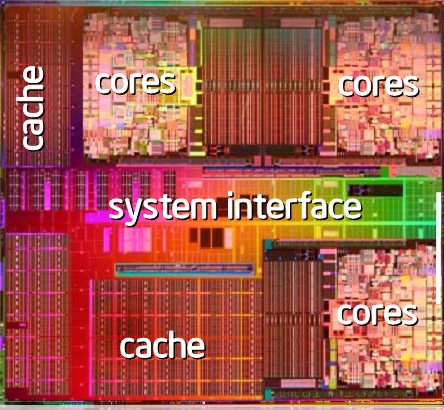 Layout of the new hex-core

TDP was probably the most important constraint that determined the choice of six cores, since core logic consumes a lot more power than cache. An 8-core design would make it necessary to reduce the clock speed too much. Even at 65nm, Intel was already capable of producing caches that needed less than 1W/MB, so we can assume that the 16MB cache consumes around 16W or less. That leaves more than 100W for the six cores, which allows decent clock speeds at very acceptable TDPs as you can see in the table below.


The other side of the coin is that Dunnington probably uses an L3 cache that runs at half the clock speed of the cores. We recorded a 103 cycle latency, measured with a 2.66GHz CPU (39 ns), for the L3 cache.

In comparison, the - admittedly much smaller - L3 cache of the quad-core Opteron needs 48 cycles (using a 2.5GHz chip, or 19 ns). The L3 cache is about half as fast as the one found in the Barcelona core, so the L3 is a compromise where the engineers traded in speed for size and power consumption.