One of the very interesting and processing intensive applications that we encountered was the modular MCS Enterprise Facility Management Software (MCS eFMS), developed by MCS. The objective of eFMS is to integrate the management of space usage (buildings), assets and equipment (such as furniture, beamers etc.), cabling infrastructure, and other areas while keeping track of costs. MCS eFMS stores all information in a central Oracle database. 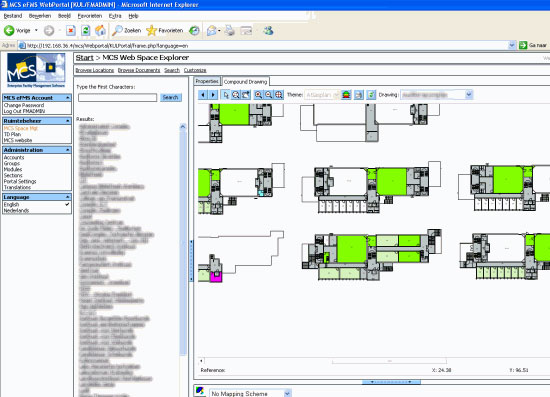 What makes the application interesting to us as IT researchers is the integration of three key technologies: A web-based frontend that integrates CAD drawings and gets its information from a rather complex, ERP-like Oracle database; building overview trees of all rooms available and their reservations in a certain building; and drilling down using the CAD drawing to get more detail: MCS eFMS is one of the most demanding web applications we have encountered so far. MCS eFMS uses the following software:

MCS eFMS is used daily by large international companies such as Siemens, Ernst & Young, and Startpeople, which makes testing this application even more attractive. We used the specially developed APUS (Application Unique Stress-testing) software, developed by our own lab to analyze the logs we got from MCS and turn these logs into a real stress test. The result is a benchmark that closely models the way users access the web servers around the world. First we test with only one CPU. 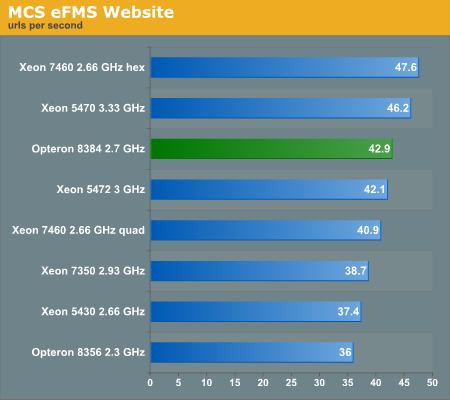 This is the real thing. No team of compiler writers have been losing their sleep to rearrange a few pieces of assembler so that the out of order scheduling can happen as smoothly as possible. Like all business logic code, it is a huge pile of complex layers, one upon the other. It is almost impossible to add some extremely clever "benchmark only boosts" in this one.

Intel takes the top spots, but it needs a 120W 3.3GHz CPU to overpower the newest AMD CPU. Typically there about 6 to 10 frontend servers (the eFMS website) for one backend (the Oracle server), so while the backend server is all about the highest CPU and I/O performance, the frontend is best served with "midrange power" CPUs. 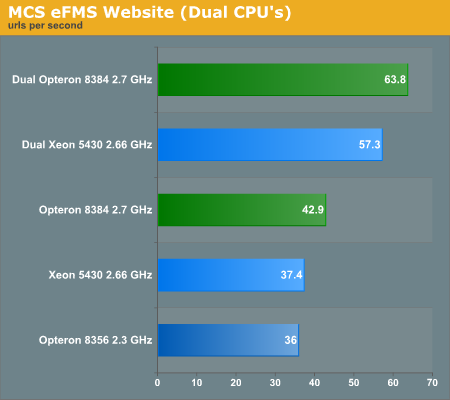 The Opteron improves its performance by 49% and the Xeon by 53% if you add a second quad-core. This benchmark has an error margin of about 3%, so it seems that both CPUs scale more or less the same.