What's this "Cloud Computing" all about, really?

There's a lot of speculation (not to mention misconceptions) flying around about VMware's recent move towards the "Cloud". Critics believe it to be absolute rubbish, a step back to the age of the mainframe, warning us of the dangers of centralized data storage and the security/availability issues that might bring about. "Only your own PC is safe enough for your data." Proponents counter these arguments by quoting the numerous applications that people use that basically require no more than a dumb terminal anyway. For example, our readers wouldn't technically need a monster PC to read our articles and their emails; just a thin client with web access would suffice.

We believe these arguments, though undoubtedly relevant with regards to personal computing, largely miss the point of what the Cloud Computing movement is looking to achieve, and with the announcement of VMware's vSphere, we would like to take some time out to clarify just what Cloud Computing is all about. VMware's press release on this hits the nail on the head quite nicely, in fact, arguing that the main problem in companies' IT infrastructure today is their high infrastructure maintenance costs. Add to this the rapidly widening gap between hardware development and the software that is actually being used in companies, and many data centers end up awfully bloated, even though only a fracture of their capacity is being used. 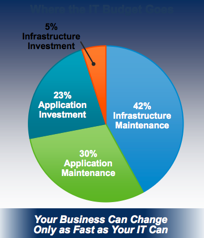 The irony here is that in many cases, this situation tends to actually be more expensive in the long run when factoring in the costs required to keep a data center running (think about electricity, renting rack space, etc.) However, companies do not like being forced to make a switch, in part explaining the large success found by virtualization in companies that simply want to keep on using the same old software, but in a more efficient manner.

Virtualization, as documented in many articles over the past year, provides a pretty solid answer to this, and is actually the core technology at the base of the Cloud Infrastructure. Its evolution from consolidation tool to fully-fledged dynamic data center management enabler has paved the way for an even bigger jump forward: IT as a Service.

Virtualization has grown to the point where we can reduce a data center to one big resource pool, with the virtual machines more or less floating on top, blissfully unaware of where their actual resources come from. IT as a Service aims to make it possible to extend this internal company resource pool (conveniently nicknamed the "internal cloud" from now on) reliably with resources obtained in much the same way as electricity, or a phone line. The idea is pay as you go, pay for what you use, always available and reliable, and with a large choice of service providers (from here on referred to as the "external cloud"). This is what VMware vSphere 4 will be able to provide.