On to the interesting part: pricing. Once again, VMware has thoroughly scrambled their existing pricing scheme with some very interesting entry points. 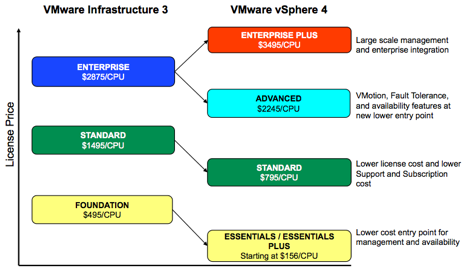 VMware's own calculations are apparently off in the essentials package, as the actual minimum price is at $166/CPU.

The existing Foundation package is split up into two entry-level packages. These are limited to three servers in total, and will not be able to scale beyond that point, but otherwise roughly translate to a slightly less than full-featured Standard version (no High Availability), and a slightly less than full-featured Advanced version (including Data Recovery, but not including Fault Tolerance and VMotion). A very nice feature comparison of the different versions can be found here.

Interesting to note, however, is that in Essentials, Essentials Plus and Standard, the limit to six physical cores per CPU from VMware Infrastructure 3 is apparently not lifted. Currently, that means that hex-cores will quite possibly be the more favorable CPUs to use in this bracket, leaving the door open for Istanbul to potentially get the most out of these configurations. Though the press release reads "physical" cores quite literally, we cannot help but wonder whether Nehalem's Hyper-Threading is included in that. If that is the case, the most optimal platform might just be Intel after all, though this is something that we'd like official confirmation on.

Before the actual announcement was made, we wondered whether VMware would allow for quad-socket machines in the Essentials packages, upping the maximum amount of CPUs to 12. According to their website, however, the three physical servers running Essentials are limited to 2 sockets each.The basic Essentials package starts at $995, which, at $166 per CPU equals six CPUs total. Essentials Plus costs $2995 all told, which, following the same logic, translates to $499/CPU.

For the Advanced and Enterprise Plus packages, the maximum number of physical cores per CPU is upped to 12, putting the future 8-core Beckton and 12-core Magny-Cours (both scheduled for release in 2010) in direct competition with each other in these price brackets.