The new Xeon “Westmere” 5600 series, has arrived. Basically an improved 32nm version of the impressive Xeon 5500 series “Nehalem” CPU. The new Xeon won’t make a big splash like the Xeon 5500 series did back in March 2009. But who cares? Each core in the Xeon 5600 is a bit faster than the already excellent performing older brother, and you get an extra bonus. You choose: in the same power envelope you get two extra cores or  5-10% higher clockspeed. Or if you keep the number of cores and clockspeed constant, you can get lower power consumption. The most thrifty quadcore Xeon is now specced at a 40W TDP instead of 60W. 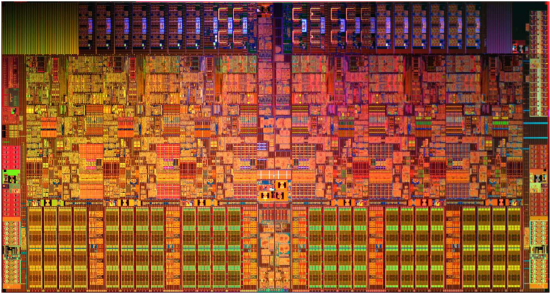 The Westmere Die: an enlarged Nehalem. Trivia: Notice the unused space on the top left

Intel promises up to 40% better performance or up to 30% lower power. The Xeon 5600 can use the same servers and motherboards at the Xeon 5500 after a BIOS update, making the latter almost redundant. Promising, but nothing beats some robust independent benchmarking to check the claims.

So we plugged the Westmere EP CPUs in our ASUS server and started to work on a new Server CPU comparison. Only one real problem: our two Xeon X5670 together are good for 12 cores and 24 simultaneous threads. Few applications can cope with that, so we shifted our focus even more towards virtualization. We added Hyper-V to our benchmark suite, hopefully an answer to the suggestion that we should concentrate on other virtualization platforms than VMware. For those of you looking for Opensource benchmarks, we will follow up with those in April. 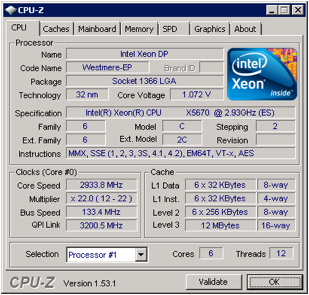 The most obvious improvement is that the X5670 comes with six instead of four cores, and a 12MB L3 cache instead of an 8MB cache. But there are quite a few more subtle tweaks under the hood: 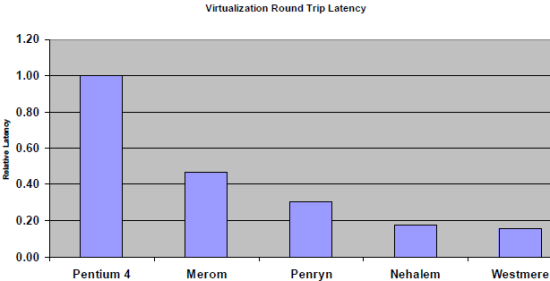 Pretty impressive,  if you consider that this makes Westmere switch between hypervisor and VM twice as fast as the “Xeon 5400” series (based on the Penryn architecture), which itself was fast. As the share of the VM-hypervisor-VM in hypervisor overhead gets lower, we don’t expect to see huge gains though. Hypervisor overhead is probably already dominated by other factors such as emulating I/O operations.

The Xeon 3400 “Lynnfield” was the first to get an un-core power gate (primarily the L3 cache). An un-core power gate will reduce the leakage power to a minimum if the whole CPU is in a deep sleep state. In typical server conditions, we don’t think this will happen often. Shutting down the un-core means after all that all your cores (even those at the other CPU) should be sleeping too. If only one core is even the slightest bit active, the L3-cache and memory controller must be working. For your information, we discussed server power management, including power gating in detail here. 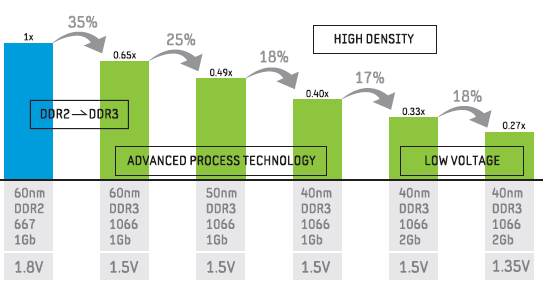 According to Samsung, 48 GB of 40nm low power DDR3 1066 should use on average about 28W (an average of 16 hour idle and 8 hours of load). This compares favorably with the 66W for the early 60nm DDR3 and the currently popular 50nm based DRAM which should consume about 50W. So in a typical server configuration, you could save – roughly estimated – 22W or about 10% of the total server power consumption.

AMD has more than once confirmed that they would not use DDR3 before low power DDR3 was available. So we expect this low power DDR3 to be quite popular.

Deeper buffers allow the memory controller of the Westmere to be more efficient: a dual Xeon 5670 reaches 43 GB/s while the older X5570 was stuck at 35 GB/s with DDR-3 1333. That will make the X5670 quite a bit faster than its older brother in bandwidth intensive HPC software.