Calling Circle is an Oracle OLTP benchmark. We test with a database size of 9 GB. To reduce the pressure on our storage system, we increased the SGA size (Oracle buffer in RAM) to 10 GB and the PGA size was set at 1.6 GB.  A calling circle tests consists of 83% selects, 7% inserts and 10% updates. The “calling circle” test is run for 10 minutes. A run is repeated 6 times and the results of the first run are discarded. The reason is that the disk queue length is sometimes close to 1, while the subsequent runs have a DQL (Disk Queue Length) of 0.2 or lower. In this case it was rather easy to run the CPUs at 99% load. Since DQLs were very similar, we could keep our results from the Nehalem article. 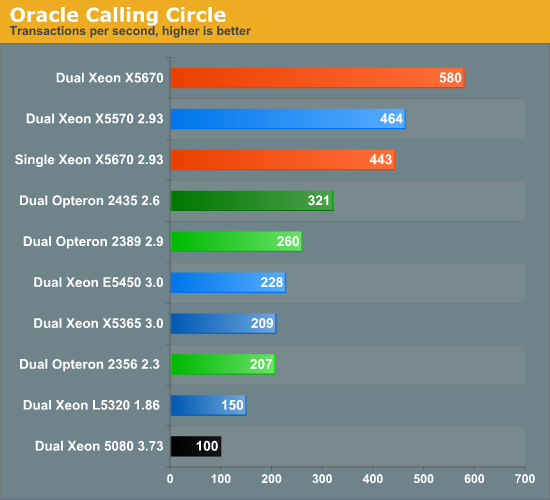 We kept this benchmark setup the same over more than a year of the testing which allows us to offer some historical perspective. Unfortunately the benchmark starts to show its age too. Our disk setup still has a bit of – but not much – headroom, but the scaling is starting to show diminishing returns. If we want to test the full potential of these six-core Xeons and servers with even higher core counts, we will need to increase our database size and as a result the amount of memory we allocate to Oracle.

We expect the Dual Xeon X5670 to be able to do better than the 31% performance increase over a single CPU setup. We saw 100% load for most of the time, but very sharp drops of CPU utilization were also common. But that does not invalidate our results: it just shows that when throwing more and more cores at certain application, you will bump into limits sooner or later.  Even on those applications which naturally scale well, the number of scenarios where more cores help will decline.

The real power of the new X5670 is demonstrated by the single CPU results: the X5670 comes close to a dual Xeon X5570 and beats a dual Opteron 2435 by a considerable 38%. This despite the fact that BIOS upgrades and slightly faster memory have allowed the six-core Opteron to become 10% faster. One of the reasons why Intel is slapping the current AMD offerings silly is Hyperthreading, good for 35% performance increase in both the Xeon X5570 and single X5670 setups.

Upgrading from an old top-of-the-line of its time Dual Xeon 5365 3.0 Server to a server with only one six-core delivers twice as much performance. Pretty impressive if you consider the former server is only 3 years old and used two 130W TDP CPUs.