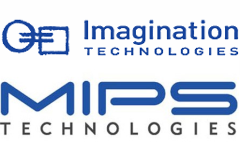 Imagination Technologies (ImgTec) announced their intent to acquire Sunnyvale-based MIPS Technologies for $60 million in cash. This price includes the operating business as well as ownership of 82 patents relevant to the MIPS architecture. The 482 remaining patents in the MIPS portfolio have been sold for $350 million to Bridge Crossing LLC, but Imagination Tech retains a royalty-free, perpetual license to them. The acquisition is expected to close in Q1 2013.

The deal brings together 2 of the top 5 semiconductor design IP vendors and strengthens ImgTec's position and opportunities in the TV/set-top-box and networking markets. While ImgTec does have its own embedded Meta 32-bit CPU core, the MIPS cores complement this lineup with the popular 32-bit and 64-bit CPU applications processors.

While the ImgTec acquisition is straightforward, the acquisition of patents by Bridge Crossing LLC seems to be worthy of further analysis. While ImgTec and MIPS don't go into the details of the companies behind Bridge Crossing LLC, ARM has come out with a press release indicating that they are a leading member of the consortium. Out of the $350 million being shelled out, ARM is contributing $167.5 million. Bridge Crossing LLC expects to license out the patents to companies who aren't part of the consortium. The acquisition of the patents by a licensing authority is more of a defensive move to prevent valuable MIPS patents from being picked up by patent trolls. While we don't have the full list of companies behind the LLC, it appears that most of them are affiliated to the Allied Security Trust, whose members include Hewlett-Packard, IBM and Intel.

MIPS has also been making a little bit of headway into the mobile space (mainly in the Chinese market), but this deal cuts down the number of players in the mobile space from three (ARM, Intel and MIPS) to just ARM and Intel now. We usually don't comment too much on the financial aspects of such acquisitions, but it does appear as if ImgTec got itself a good deal in the process.