One side effect of the current march towards ultramobility is the nearly complete abandonment of expandable/upgradeable local storage. No modern smartphone or tablet allows for upgradeable internal storage, and it's not exactly common to find microSD slots or USB ports on them either. This is particularly a problem if you're shopping with Apple, where expandable storage has never been a part of the iPhone or iPad. As a result, you're encouraged to buy enough storage to last you until the next upgrade - as well as rely heavily on cloud based storage and streaming services.

Huge amounts of high performance NAND can be pricey. Modern SSDs are finally below the $1/GB price point, which when applied to a tablet should mean that the difference between 16GB and 32GB of storage is no more than $20. The reality however is far worse. NAND costs even less than the ~$1/GB that we pay when buying an SSD, and manufacturers tend to charge anywhere from $50 for 16GB to $100 in the case of Apple. For lower cost devices there may not even be higher capacity versions. All of the sudden that simple solution of just buying as much storage as you need up front becomes a lot more complicated. If you take into consideration the fact that smartphones and tablets are quickly replaced with much better versions, there's a good chance that you'll want a new device before you run out of storage if you buy the largest capacity offered. 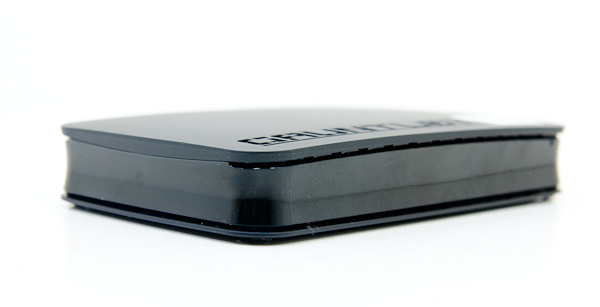 A number of players in the storage industry have recognized this problem and are attempting to find the perfect solution. Just like there's still movement in determining the best mobile form factor, there have been a lot of early attempts to get wireless external storage for mobile devices right. We covered some of these in the past (e.g. Kingston's WiDrive and Seagate's GoFlex Satellite) but more recently Patriot Memory threw its hat into the ring with the Gauntlet Node and the Gauntlet 320.

The Gauntlet Node is an external 2.5" HDD enclosure with built in USB 3.0 and 2.4GHz 802.11b/g/n support. Completing the package are software clients for Android, Kindle Fire and iOS, allowing you to access media content stored on the Gauntlet Node from Android smartphones/tablets as well as your iPhone/iPad. The Node ships without a hard drive for $99, while the 320 includes a 320GB 5400RPM drive for $159.

Getting big content onto the Node pretty much requires that you transfer it from a Mac/PC over USB 3.0. The 320 comes pre-formatted with an NTFS partition, although the latest firmware adds exFAT support. Both the Android and iOS apps support uploading directly from your device to the Gauntlet Node. I measured wireless upload speed at roughly 20Mbps. The ability to upload and download directly from the Node is quite handy although I wouldn't consider the Node a device you can use without having any Mac/PC around (especially if your clients are iPhones/iPads). Firmware updates for example require you uploading the firmware bin file to the root of the Gauntlet Node, which is just much easier to do on a Mac/PC (or Android device). You can mount the Node wirelessly as a Samba share, but if you go that route and are uploading content be sure no one else is trying to use the Node at the same time as performance suffers considerably. 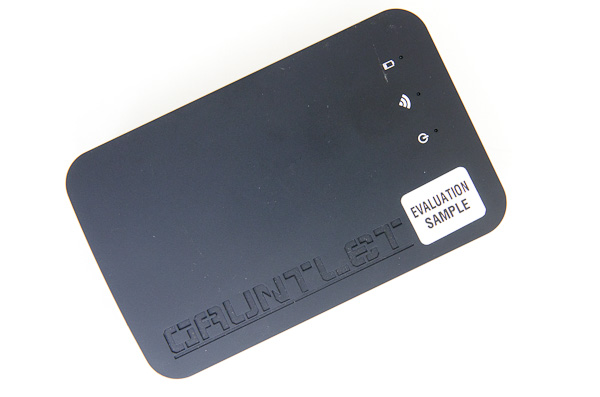 Using USB 3.0 is a great way of initially moving content to the Node, but once you've got your library established there you can stream wirelessly to up to 8 devices. The Node creates a 2.4GHz 802.11b/g/n WiFi network that you can connect to just like you would any other WiFi access point. To ensure that you never lose internet connectivity, you can tell the Gauntlet Node to connect to an available WiFi network and relay all internet traffic through it. There are limitations of course. Captive portals aren't supported, and I usually found myself doing a disconnect/reconnect dance to get WiFi pass-through working. Even then, there's a reduction in performance. I ran a speedtest at 33Mbps down when connected from my iPad directly to my 2.4GHz 802.11n network, but that rate dropped to 13Mbps when connected through the Gauntlet Node. It's fast enough to be ok for browsing the web, email and even streaming video, but it's still slower to run your internet requests through the Node. 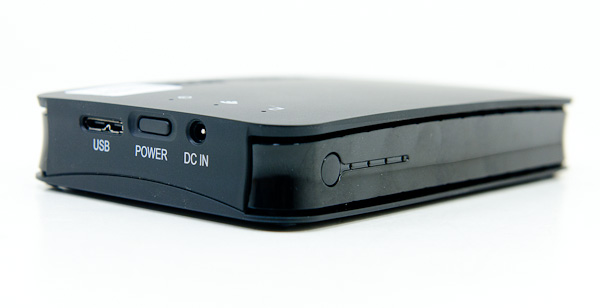 The big feature for the Node is obviously streaming media content from the hub. Patriot claims you can wirelessly stream HD video to up to 5 clients, however in practice that number will vary depending on the bitrate of the content you're streaming. I had the Gauntlet Node streaming our 4Mbps 720p High Profile H.264 battery life test to four devices at the same time with no issues.

There's a large (by smartphone standards) 12.4Wh battery inside the Gauntlet Node, unfortunately the mechanical hard drive does a good job of burning through it. With only two clients streaming a 4Mbps 720p HP H.264 video, I clocked the 320 in at 3 hours and 13 minutes on a single charge. Recharging the node also takes a considerable amount of time using the supplied 10W charger. You don't have to be on battery power to stream, although the experience is seriously awesome when you can just set the Node down somewhere in a room and have multiple clients access it at the same time. 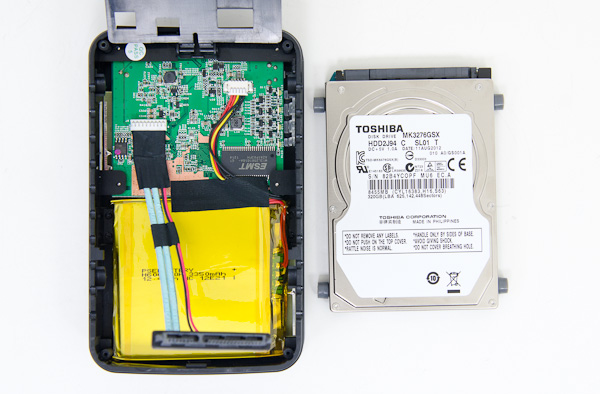 Internally the 320 features a 3Gbps Toshiba MK3276GSX SATA hard drive. The drive spins at 5400RPM and features a 8MB buffer. There's no need for a 6Gbps drive here as the ASMedia 1053 USB 3.0 to SATA bridge only supports 3Gbps SATA. I measured sequential read/write performance of the drive at 85.3MB/s and 83.5MB/s, respectively. You can't have both WiFi and USB 3.0 active at the same time. Plugging the Node into your PC via USB will disable the wireless network.

Wireless duties are handled by the Ralink 5350F controller. The lack of 5GHz support can be a problem in hotels or apartment complexes with lots of 2.4GHz crowding, although I didn't have any issues while I was traveling with the 320. Range was decent for the Node/320. I measured a maximum range of around 10 - 20 feet depending on the client device, so you'll want to keep the Node reasonably close. 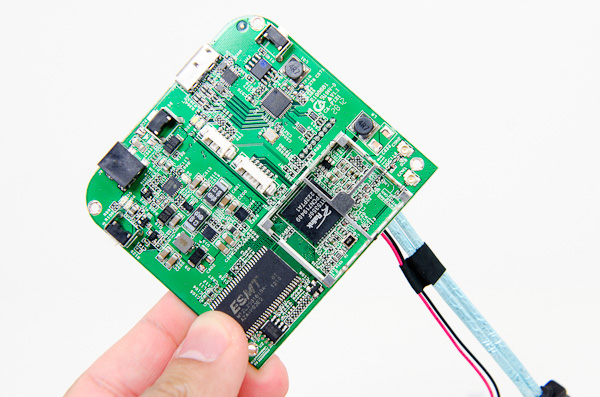 There's a total of 64MB of SDRAM (running at 166MHz) on-board for the on-board OS and services.

Patriot's Gauntlet Connect is available on both the App and Play stores, and is free for all supported platforms. The Android and iOS versions closely mimic one another, although the iOS app is a bit more polished (there's no GPU acceleration for animations in the Android app, which means flipping through photos happens at a low frame rate). Both apps allow you to manage wireless settings on the Node (enable WEP/WPA2, enable WiFi pass-through, change SSIDs, etc...), move files to/from the Node, as well as view/play photo, video and audio content. 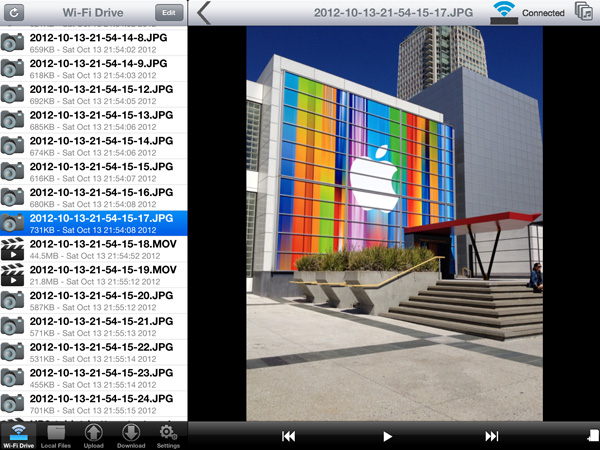 The architecture is all folder based, which makes Gauntlet Connect look a bit out of place in iOS but it's functional. Viewing photos, watching movies or playing music is all intuitive and it just works. The copy/move functionality isn't quite as intuitive but once you get the hang of it it's easy to master. Background uploading isn't supported by the Gauntlet Connect app, so if you're uploading content to the Node you'll have to remain within the app until the upload is finished.

Overall the Gauntlet Node is a good first attempt by Patriot. The Node is well built, and despite its size it remains easily portable. Pricing is very competitive with the $99 BYOD version being perfect if you've got an old 2.5" HDD or SSD laying around. The experience of being able to stream a bunch of content to a small room full of friends/family, each with their own Android/iOS device is pretty neat. It's even more impressive when you can do so without having to plug the Gauntlet Node in.

Ultimately the battery life is my biggest gripe with the Node. There are software issues and hiccups that make a true multi-user experience painful, but I do hope that Patriot caan resolve these with future firmware releases. Progress over the past couple of months has been positive on that front, but initial adopters may have to put up with the software's quirks. In the long term I would like to see a solid state based solution with a much larger battery and better responsiveness under load. Ideally the Node shouldn't die before the tablets/smartphones that are streaming content from it, but that might be a tall order given how long an iPad will last playing back video.

It's clear to me there's a lot of potential in these types of wireless tablet storage devices, but like the industry they service, we'll have to go through a learning process before we find the perfect one.