Although game bundles are nothing new for the video card industry, in the last couple of years they’ve come back into vogue in a way we haven’t seen in at least a decade. With digital distribution becoming the de facto distribution method for PC games it has transformed video game bundling by supplanting the need to include physical copies of games with video cards.  This has allowed GPU manufacturers and their partners to get a lot more creative in what games are bundled, particularly by allowing them to bundle newly released (or even yet to be released games) instead of months-old games that the logistics of physical distribution require.

At the same time of course we wouldn’t be talking about this had bundles not also proven to be successful for GPU manufacturers, with both NVIDIA and AMD having found a great deal of success in this new wave of video game bundling. By bundling games AMD and NVIDIA can not only latch on to the attention and the hype that goes with the launch of a new AAA game, but it helps their financial sides too. Through bundling they can add value to the product and prop up prices by including something that is valuable to the consumer (but relatively cheap for the manufacturer), rather than having to slash prices and repeat the bloody price wars that marked the start of this decade.

With that in mind, following the success of AMD’s most recent video game bundles – Gaming Evolved (summer) and Never Settle (holiday) – AMD will be orchestrating another bundle for the winter/spring timeframe, to coincide with the forthcoming launch of several Gaming Evolved sponsored titles. The new bundle, dubbed the Never Settle Reloaded bundle, will see AMD putting together a couple different bundles at different price points with a mix of old and new games. 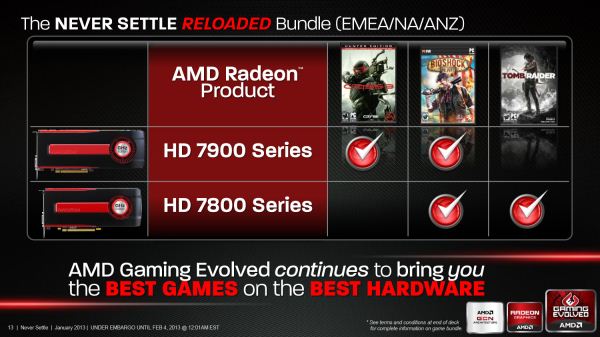 This time around the 7700 series will be left out (no doubt due to the sub-$100 prices those cards now fetch), but the 7800 series and up will now come with at least two games. For most buyers the 7800 series will be bundled with Bioshock: Infinite (launch date March 26th) and Tomb Raider (March 5th), while for Asia-Pacific region buyers will get Devil May Cry (February 28th) in place of Tomb Raider. Meanwhile the 7900 series swaps out Tomb Raider for Crysis 3 (February 19th), an unlikely (and unexpected) addition to the Gaming Evolved stable. Finally, for buyers picking up a pair of 7900s (or a single 7990), AMD has a six-game bundle composed of the three new games (Crysis, Tomb Raider, and Bioshock), along with Far Cry 3, Sleeping Dogs, and Hitman: Absolution from their previous bundle. 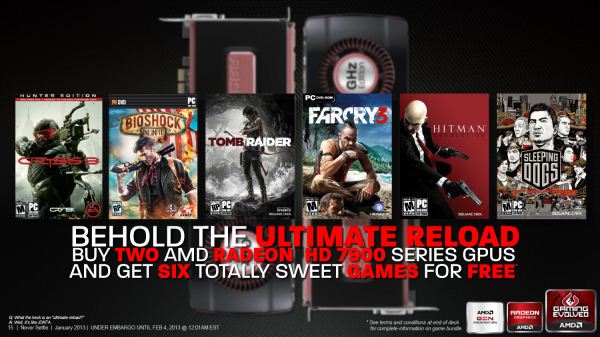 Q: What the heck is an “ultimate reload?” A: Well, it’s like IDKFA.

As always, these bundles are being offered in conjunction with AMD’s major retail/e-tail partners, who will be distributing vouchers for any qualifying purchases. So anyone looking to partake in this bundle will want to make sure their retailer of choice is participating. The vouchers themselves are redeemable through AMD’s website, which will be distributing Origin keys for Crysis, and Steam keys for the other games.

On a final, more speculative note note, in the past we’ve seen NVIDIA run their own bundles opposite AMD bundles most of the time. Consequently we wouldn’t be surprised to see NVIDIA fire back sometime in the next couple of weeks. Their traditional partners Ubisoft, Gearbox, and Capcom all have AAA games due out in the next two months, giving NVIDIA several options if they do decide to run a bundle offer of their own.