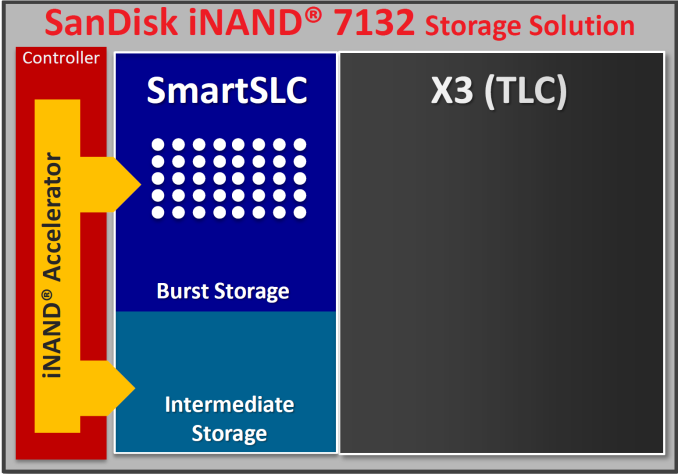 This is a problem that SanDisk hopes to solve with their new iNAND 7132, which uses a hybrid SLC/TLC architecture to deliver both high burst performance and cheaper storage for a given design. SanDisk claims that typical storage usage is extremely peaky in nature, even with seemingly contiguous data streams. In addition, relatively few cases can truly saturate modern eMMC on a smartphone even when using a TLC-based solution.

By integrating an SLC cache into the eMMC package, it’s possible to achieve peak sequential reads of up to 280 MB/s, sequential writes of up to 125 MB/s, and up to 2800 and 3300 IOPS for random writes and reads, respectively. Based upon our discussions with SanDisk, it seems that the SLC cache is generally less than a gigabyte, but is usually enough to avoid situations where the SLC cache is filled and writes must go to the TLC storage.

SanDisk has also implemented a great deal of error correction and extensively tested this storage solution, and claims that eMMC solution can last 10 years of 24/7 intense use without data loss. The iNAND 7132 eMMC 5.0 solution is currently available in 16, 32, and 64 GB variants, with a 128GB variant arriving mid-year.