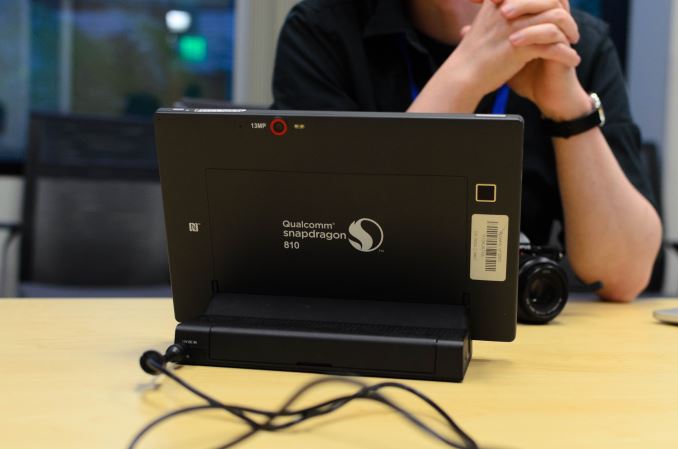 Although the Xperia Z4 Tablet was announced as far back as MWC, it wasn’t until recently that the enhanced noise rejection of the touchscreen was really shown off. At first it wasn’t exactly clear how this was accomplished, but it turns out that this is a Qualcomm technology at heart, namely improveTouch. For those that are unfamiliar with this technology I've attached a video from Qualcomm demonstrating the technology below.

At a high level, improveTouch uses a Snapdragon SoC to effectively replace aspects of external touchscreen controllers. This is done by moving touch processing from the touch screen controller to the SoC’s application processor. By doing this, it’s possible to enable faster sampling rates/lower touch latency for the digitizer and more advanced noise rejection algorithms like water droplet rejection. Although improveTouch currently doesn’t support underwater touch, according to Qualcomm it’s technically possible to implement such features in the future. It’s also possible for do additional advanced context awareness/sensor fusion with this system, such as improved proximity sensing with the use of a traditional IR sensor and the touch screen.

One obvious potential pitfall of such a move would be that power consumption could increase significantly over traditional systems, but according to Qualcomm power consumption is competitive with other solutions when at the same sampling rate and processing complexity, partially because touch controller solutions tend to lag on process node. For applications where the display is off and the AP is usually asleep like double-tap to wake, improveTouch has something called the Autonomous Touch Engine, which has an MCU and other components to avoid waking up the application processor unnecessarily. In addition, the cost of such a solution is competitive as some components from a traditional touch screen solution can be eliminated. It's also worth noting that the CPU load of this system is said to be minimal and won't affect performance of the AP, although Qualcomm didn't disclose a specific figure and it's likely that CPU load effects depend upon a large number of factors.

Although improveTouch is capable of improving user experience by reducing touch latency and more sophisticated digitizer functions like water droplet rejection, according to Qualcomm there are significant benefits on the OEM side as implementation is simpler with this architecture. By using a narrow-band filter on the analog front-end which is said to have 60 dB SNR (it isn't clear whether this refers to dynamic range, average SNR, peak SNR, or some other measure), getting the touch sensor to work well with the touch controller is easier than traditional solutions. However, it remains to be seen whether adoption for improveTouch will become significant among OEMs that use Qualcomm SoCs.