Kicking off another earnings season for the tech industry, we as always start things off with Intel, who is the first big chipmaker out of the gate. Over a year into the coronavirus pandemic – and slowly heading out of it – Intel has seen its ups and downs as product demands have shifted and the company’s ability to execute over the long term has been challenged by fab delays. Following a particularly painful (by Intel standards) first quarter, the company is hoping to put those problems behind them with a stronger second quarter.

For the second quarter of 2021, Intel reported $19.6B in revenue, a decline of less than $100M versus Q2’20, and what Intel is calling a flat difference overall. More importantly, perhaps, is that Intel’s profitability has also held quite steady (and significantly improved over Q1), with Intel booking $5.1B in net income for the quarter, a YoY decline of 1%. Overall, with a lone caveat, Intel’s Q2 performance has exceeded their earlier projections.

Intel’s famed gross margin has also recovered on both a quarterly and yearly basis. At 57.1% it’s up almost 2 percentage points higher than Q1, and almost 4 percentage points higher than Q2’20. Intel’s gross margin has been subject to greater than usual fluctuations as of late – typically dropping whenever a major new product is ramping – but at least for Q2 it is on the rise as Intel enjoys a very profitable quarter.

Breaking things down on a group basis, there are a couple of major points to immediately take away. The first is that, while still recorded per Generally Accepted Accounting Principles (GAAP) rules, Intel is all but ready to cut loose its NAND memory business, which it’s in the process of selling to SK hynix. That said, the deal has not been approved and a closing date has not been set, so while Intel is opting to exclude it from their non-GAAP results (and future business projections), they aren’t free of it quite yet.

Second, this is the first full quarter that can be used for year-over-year comparisons with the coronavirus pandemic. While Intel’s manufacturing side has long since stabilized there, year-over-year numbers are sometimes in odd places as the demand mix a year ago was very unusual, to put it mildly.

For Q2, Intel’s Client Computing Group was once again the biggest winner; that division pulled in $10.1B in revenue, and is up 6% YoY. According to Intel, both laptop and desktop revenue is up, as Intel has surpassed shipping 50 million Tiger Lake processors. That said, these revenue gains are largely volume-driven; ASPs for both desktop and mobile are down, due in part to what Intel is noting to be increased sales of low core count processors. Intel’s improving fab situation has also played a part here – according to the company, 10nm production costs have dropped, helping to improve the division’s operating income.

Meanwhile Intel’s Data Center Group is really starting to feel the impact of the increasingly competitive server environment. While revenue was up 16% versus Intel’s tough Q1, it’s still down 6% on a yearly basis. Breaking that down further, both cloud server provider and communication sales are down, buoyed somewhat by an uptick in enterprise and government sales. But with chip volume and ASPs both down a bit, group revenue can only fall. Intel has long wanted to get away from CCG leading the company’s earnings – in big part by growing its server revenues – but for the moment it looks like that won’t be in the cards. Though as Intel continues to ramp up 10nm production (and thus Ice Lake Xeon production) there is some opportunity to recover in future quarters. 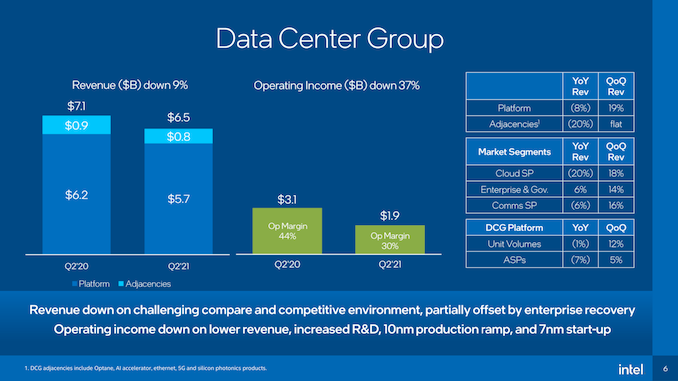 As previously mentioned, Intel is looking to cut loose its NAND business, which is now the only part of the company’s Non-volatile Solutions Group (Optane is DCG). None the less, for the moment Intel still has to account for the group’s revenue, which is down 34% on a yearly basis. Because Intel is downplaying the group so much, they aren’t offering any meaningful written commentary on why revenues are down, but it would seem to be pandemic-related. NSG recorded a very big bump in revenue a year ago, and things have since fallen back towards the industry baseline.

Rounding out Intel’s remaining divisions, both the ioT and Mobileye groups are up significantly on a yearly basis, with revenue jumping 124% in the case of Mobileye. Both groups are benefitting from the post-pandemic recovery, as well as additional design wins in the case of Mobileye. Otherwise, Intel’s final group, Programmable Solutions, saw revenues decline a few percent due to what Intel calls “inventory digestion and supply constraints.” 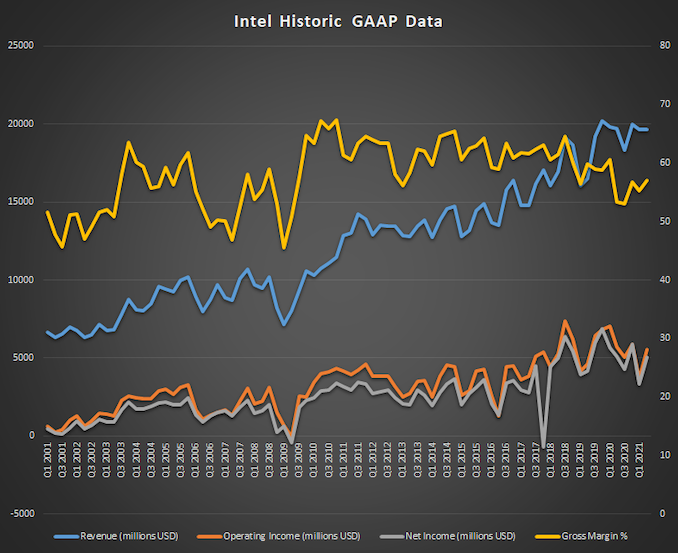 Overall, Q2’2021 marks a better quarter for Intel on both a quarterly basis and a yearly basis. Along with recovering from their tough Q1 three months ago, Intel this year isn’t facing another fab delay, as Intel’s big 7nm delay was first announced as part of their Q2’20 earnings. To be sure, the company is essentially flat on revenue and profit on a yearly basis – while its competition has generally grown – but as Intel gets further into CEO Pat Gelsinger’s tenure, there is increasing confidence that Intel will hit its goals (and a decreasing window to miss them).

Looking forward, based on their stronger-than-expected Q2 performance and optimism about Q3 and beyond, Intel is increasing its full-year guidance. The company is now projecting revenue to grow on a yearly basis, while gross margin projections remain unchanged at 56.5%. With that said, Intel’s projections all exclude their NAND business, with the company assuming that the deal will be approved by regulators this year as originally planned.

Finally, the next big business update from Intel will come on Monday, when Intel hosts its Intel Accelerated event. That webcast will be focused on Intel’s process and packaging roadmaps, and is a big step in Intel’s efforts to establish their IDM 2.0 strategy. We’re hoping to see more on Intel’s 10nm and 7nm roadmaps there, as well as more on Intel’s next-gen packaging technologies. In the meantime, Intel’s efforts seem to have at least caught the collective ear of Silicon Valley, as the company has revealed today that they’re in talks with 100 potential foundry customers.