The very first enthusiast SSDs had their roots in USB drives. Memory vendors that were making USB sticks thought to put a bunch of NAND in parallel behind a rudimentary NAND to SATA controller and you had an SSD. Performance characteristics looked great on paper but of course there were teething problems.

These days the reverse has happened. High end USB sticks now look a lot like small SSDs. USB 3.0 SSDs were either too bulky to carry around or weren't that impressive from a performance standpoint, but SuperTalent just showed me one that is quite tempting.
This is the SuperTalent USB 3.0 Express RC8, it's a USB stick that has a SF-1222 controller just like the previous generation of high end SSDs: 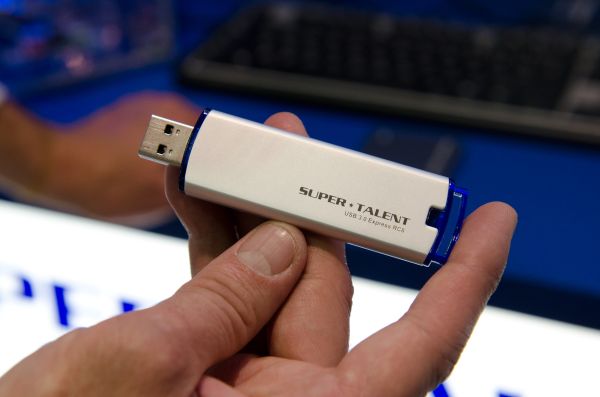 With four NAND devices on board, the RC8 actually has 8-channels feeding two die per package. Two channels are routed to each device, hence the use of BGA NAND vs. TSOP. SuperTalent uses 25nm IMFT NAND for the drive.
Performance as a result is quite impressive. Over USB 2.0 you're looking at a maximum of around 40MB/s, but over USB 3.0 you can hit 200MB/s with highly compressible data: 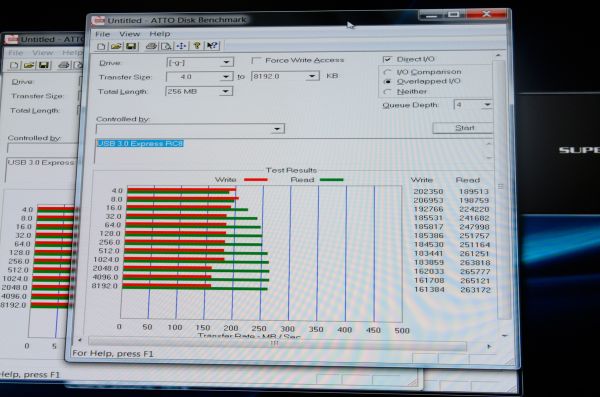 Worst case performance for incompressible sequential writes over USB 3.0 is still only 32MB/s thanks to the one-die-per-channel architecture (as well as inherent SF limitations). Read speed is still excellent however at nearly 180MB/s. 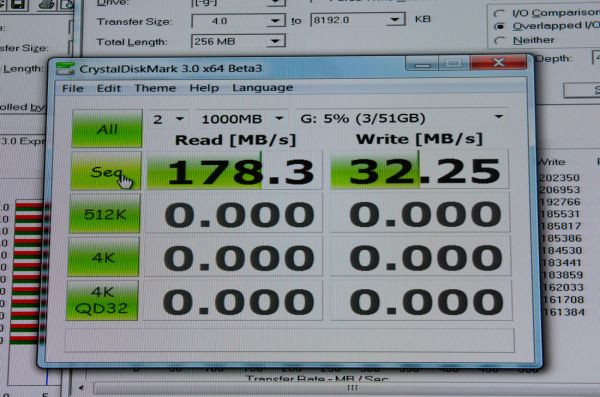 The performance characteristics make this drive less ideal for copying large compressed videos to, but great for general use. In fact, running/installing applications or even running a full OS environment from the drive is likely a pretty good experience.
SuperTalent will offer the RC8 in 25GB, 50GB and 100GB capacities (with 32GB, 64GB and 128GB of NAND on board).
Expect availability starting late this month and pricing to be inline with standard SF-1222 based SSDs (~$110 for the 50GB drive).
Gallery: Computex 2011: SuperTalent SandForce USB Stick
Tweet
PRINT THIS ARTICLE
Comments Locked